Musicality and Harmony Give Children Wings

Music gives a soul to the universe, wings to the mind, fight to the imagination and life to everything. – Plato

Modern science is beginning to recognize the profound effect of sound on the human nervous system. Researchers have discovered that specific sound frequencies, influence brain waves and chemistry by increasing dopamine and serotonin (the ‘feel-good’ hormones). Indeed, the power of sound to influence consciousness and well-being has been evident for millennia, from Gregorian chants of the Middle Ages to the shamanic drumming of indigious cultures from Siberia to South America to the impassioned voices and rhythms of Africa.

The deeper we penetrate the mystery of sound, the more we are able to trace the link that connects all sounds — what musicians call harmony; and it is in harmony that is hidden the secret of joy and peace. – Hazrat Inayat Khan, ‘The Mysticism of Sound and Music’

The ancients understood the power of sound and music. Pythagoras believed that each planet rang out its own note based on unique vibratory frequencies, which he called “the music of the spheres.” Plato asserted that a musical education was essential because, “More than anything else, rhythm and harmony find their way into the innermost soul and take strongest hold upon it.”

The mythical Hermes Trismegistus, considered the father of alchemy, chemistry, and modern science, devoted two books of his ‘Hermeticum’ to the study of sound and frequency from an alchemical, or transmutative, perspective. Alexander the Great so treasured these Hermetic texts that he built the Library of Alexandria to house and preserve them.

The ancient Vedic masters recognized the influence on sound and vibration on consciousness, and developed a complex system of syllables, called ‘bija.’ When combined, these bija became mantras corresponding to every aspect of consciousness. The practice of chanting the syllable ‘OM’ is perhaps the most well known example of the use of sound from the vast Vedic mantra system. 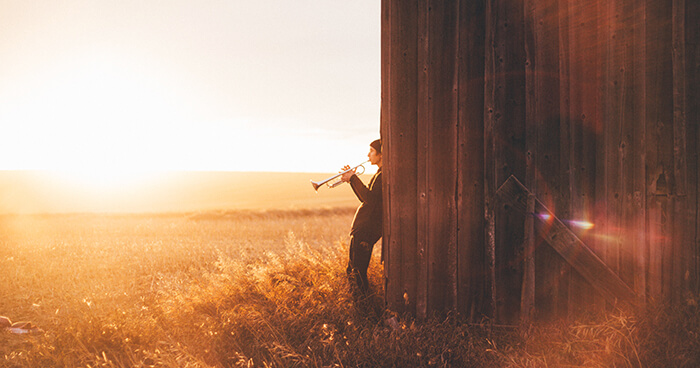 “…it is in harmony that is hidden the secret of joy and peace.” Image: Priscilla Du Preez

With a natural love for music and performance, a young girl growing up in Wyoming, far from the lights of Manhattan, wanted to be a Broadway actress. Later, Gina Marie Williams became fascinated with understanding and curing disease. “If the choice was to sing a pretty song or cure AIDS, curing AIDS seems like a better contribution to humankind. I was gifted in the health sciences and anatomy and felt it was my responsibility to become a doctor,” she said. But while she pursued a medical education in epidemiology, she never lost her love for the creative arts.

Eventually she recognized profound disconnects between medical science and true ‘wellness,’ and circled back to music as a performer and songwriter, while also studying visual art. At the same time she explored and learned structural bodywork systems, moving more deeply into the relationship between health and consciousness. All her passions, interests, and creative expression intersected with decades of training in esoteric alchemy and mystery school teachings from throughout the world.

“I worked for a time as a performance coach, and then started working as an executive coach. My clients were professional singers, actors, and comedians. Later I began to work with entrepreneurs and executives who were speaking in public and learning how to use their voices to contribute value in the world,” Williams said. Over time, she developed sound training tools to help her clients to achieve deep congruence of body, speech, and intention.

Immersion into music, sound, speech and coaching led Williams to conclude that ultimately, the greatest contribution she could make would be to give children the same tools she developed for adults. She also recognized an opportunity to adapt ancient sound wisdom to modern life, and FlowSong was born. “I wanted to give kids the tools to manage their body/minds and express their deepest, heart-felt values,” she said.

Flow in Song, Heart and Love

FlowSong is a book series, written and illustrated by Williams, that offers methods for using the western musical octave as a map for navigating the creative process. She is quick to point out that the FlowSong method is intended to help children find their ‘voice’ and creative potential rather than a sonic ‘healing’ modality. 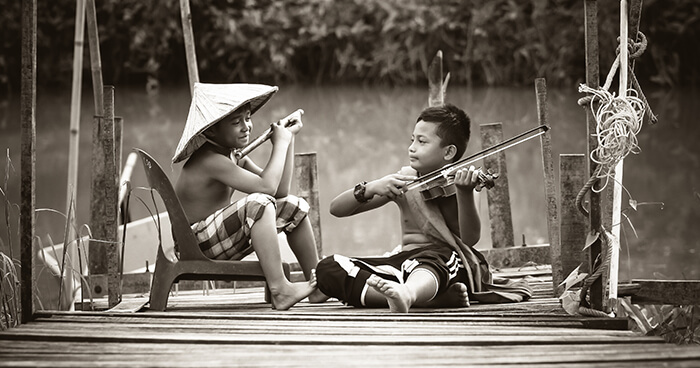 Music is a great tool for managing our minds and bodies, as well as expressing ourselves. Image: Pok Rie

In her work she observes that when students sing the vowels, they become more aware of the intrinsic connection between their voices, different tissue and organ systems of the body, and the areas of shared human experience. “Using the vowels can help identify self-imposed limits to creative expression. They help people increase their ability to communicate and listen more effectively, find the courage to take risks on their own behalf.”

Williams explained that her system is based on the seven vowels first identified by Pythagoras over 2,600 years ago. She said, “FlowSong helps readers understand the connection between their body, mind, voice, and spirit so they can more fully express their creative genius. It is a tool for personal development disguised as a magical adventure tale.”

“FlowSong helps them understand their instrument of communication — their body, mind, and voice, and how to use it to make rich, genuine, face-to-face connections with others. The root of successful creating always has been, is, and always will be the ability to develop and maintain healthy relationships.”

As children’s voices are emerging as a valid and rightful force for our future, it’s important that we imbue strong harmony values when they are young. Imagine a world in which resonance and harmony for the greater whole is second nature. May we all sing a song of Unity, Peace and Love flow.

Think about a child in your life … son or daughter, grandchildren, nephews and nieces or your friends’ kids. Do they have any strong musical influences in their lives? Have they been introduced to classical music? Do they play a musical instrument? Could you help facilitate their musical journey. Perhaps contribute to buying a musical instrument? Paying for lessons a few times a year?  What are some of your positive experiences with music and transformation? We look forward to your comments below.

I really enjoyed reading it, you can be a great author. I will definitely bookmark your blog and may come back someday Thanks for a great post. Please continue to uphold!

Music gives a soul to the universe, wings to the mind, fight to the imagination and life to everything

0
Reply
PrevPreviousScarlett Lewis: We are Wired to Connect
NextInternal Energy and the Breath of LifeNext