Making it illegal to Waste Food

BY Jonathan Davis
Welcome to UPLIFT
Stories of Love
Making it illegal to Waste Food
Did you know that nearly half of all food produced is never eaten?

Upon discovering that fact, you wouldn’t be the first to think ‘someone should make a law against that’.  In fact, not long ago this very idea occurred to a French supermarket owner and local Counsellor named Arash Derambarsh.  With the power of community amplified by technology, the French people are now giving the world are a taste of how accessible and immediate change can be.

“I became a local councillor because I wanted to help people. Perhaps it is naive to be concerned about other human beings, but I know what it is like to be hungry.”
– Arash Derambarsh

For Derambarsh, the idea for the campaign to make food waste illegal began after he began giving away leftover food on the street outside his supermarket after closing time, and was moved by the powerful effect it was having on the people he was regularly helping.

“Every day we’d help around 100 people. Half would be single mothers with several children, pensioners or public workers on low salaries, the other half would be those living on the streets or in shelters.”
– Arash Derambarsh

Thanks to Derambarsh’s initiative, a 211,000 strong change.org petition was tabled at the French National Assembly by former food minister Guillaume Garot in May this year, along with a bill to bring a ban on commercial and industrial food waste. The bill swept its way into law and is due to be implemented in July 2016. 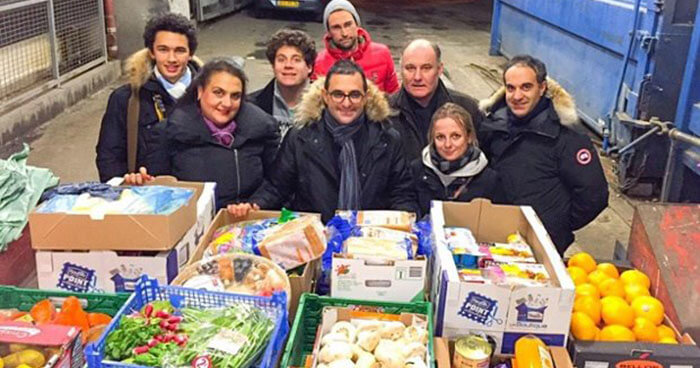 Why is food waste a problem?

Food waste is one of the most widely recognised oxymoronic aspects of western culture due to the disparity between enormous waste and enormous poverty and hunger. The UN reported in 2013 that approximately one third of the world’s food production goes to waste. This equates to 1.3billion tonnes of food. The Institute of Mechanical Engineers is less optimistic, estimating global food waste at around 50% of production in their Global Food Waste Not Want Not report, published in the same year. These epic estimations stands in stark contrast to the fact that one in ten people on Earth are undernourished. A recent UDSA report on post-harvest food losses claims that one in seven people in the US lack reliable access to food and an extra 15% in saved food could feed over 25 million people. Not to mention that 33 US cities actually have an active ban on giving food to homeless people.

Perhaps an even bigger consideration is the amount of resources going into food production, such as water; land-clearing; pesticides and fertilisers, fuel and carbon for logistics and packaging; all of which are clearly illustrated in the video below.

We’ve been trained to expect our food to look un-naturally perfect.  The truth is that perfectly good food more often than not has natural imperfections. This example is particularly pertinent at the production and distribution end of the supply chain.

There’s a perception, when we go to the grocery store that we should be able to not only have whatever fresh produce we choose at any time of the year, despite seasonality, but also that there will be enough of whatever we want at all times of the day.  For this reason supermarkets need to remain overstocked to meet this expectation – which means significant waste.

A key problem in countries like the US is consumer confusion around terms like ‘sell by’, ‘best by’ and ‘use by’ – leading to approximately one third of all household food waste. Huffington Post also reports that in 2001 US businesses threw away $900 million worth of food because of expiration dates.

How the new French law will work

In simple terms, french supermarkets will be required to give food waste to charities such as food banks as well as animal feed and compost if not fit for human consumption. Supermarkets past a certain size will have to sign contracts with charities to ensure waste-food is collected. The practice of deliberately spoiling food will be banned and fines of up to €75,000 or two years in jail will apply.

“It’s scandalous to see bleach being poured into supermarket dustbins along with edible foods.”
– Guillaume Garot

The policy appears to have taken direct influence from the Food Waste Reduction Alliance’s Solutions and Best Practices report, depicted below. 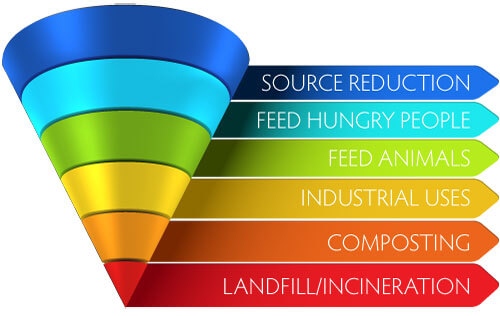 Why does this plan need to go global?

The most compelling case of all for taking global action on food waste is climate stabilisation. In the USA, organic waste is the second highest component of landfills creating the the largest source of methane emissions.  The US EPA states that methane is twenty times more destructive to climate stability than carbon dioxide.

The more human caused release of Co2 and methane, the closer we get to raising ocean temperatures to a point where massive methane deposits currently trapped in the ocean floor will be released.  Should this occur, we will have crossed a point of no return that will take the climate into a state of cataclysmic change.

Thankfully, Arash Derambarsh will be teaming up with change.org, french NGO ‘One‘ to present the merits and success of this strategy to the UN for it’s Millenium Development Goals discussion in September. They’ll also be tabling it a the G20 summit in November, and the COP21 Environment Conference in December.

For more information check out the following articles posted at The Guardian and The Atlantic. You can also check out the United Nations Environment Programme’s Food Waste Quick Facts Guide.