Is Reality a Hologram?

BY Jonathan Davis
Welcome to UPLIFT
The Science of Love
Is Reality a Hologram?
Does Science And Mysticism Agree That Reality Is An Illusion?

You may be aware of the fact that tech billionaire Elon Musk of Tesla and SpaceX is now publicly stating his belief that it is mathematically impossible in a practical sense, that we are not living in a computer simulation. His logic is surprisingly sensible.  In 1972 we had Pong, a rudimentary simulation of table tennis. Now we have games that are near photorealistic.  If we keep to this course, we will create simulations that are indistinguishable from reality, even if it takes us a few more thousands of years, it will happen. So if it will happen… how do we know it hasn’t already happened? How do we know we’re living in the base reality and are not already in a simulation?

There’s a one in billions chance we’re in base reality. – Elon Musk

Recently, a team of Japanese scientists also announced they have found ‘clearest evidence yet’ that the universe is a hologram. While this may be the most recent effort to prove the holographic universe theory among numerous others, science has been perplexed by the insubstantial nature of reality since well before holographic theory existed – not to mention the mystics and philosophers who have been suggesting the same thing (in less reductionist terms) for thousands of years.

From The Ancient East To Modern West

Eastern mysticism has long held the perspective that our physical reality is really the maya of illusion. First century buddhist philospoher-poet Aśvaghoṣa put it that ‘all phenomena in the world are nothing but the illusory manifestation of the mind and have no reality of their own, while 13th century sufi mystic Rumi suggested that ‘this place is a dream. Only a sleeper considers it real.’ Jump all the way forward to the 1960s, and a wave of eastern mysticism crashed on the shore of western culture thanks to public figures like Alan Watts . Perhaps out of everyone, his is the most captivatingly poetic rendering of the subject.  For the full experience, take a look at this beautiful new short film from Aaron Paradox.

Since the emergence of quantum mechanics in the 1920s, science has struggled to reconcile the conundrum of reality no longer being able to be identified as something in any way permanent or fixed, and it was with impermanence that the first echoes of eastern philosophy began ringing uncomfortably within the walls of science. Neils Bohr, one of the fathers of quantum theory is famously quoted as saying:

Everything we call real is made of things that cannot be regarded as real.  If quantum mechanics hasn’t profoundly shocked you, you haven’t understood it. – Neils Bhor

As eastern philosophy spread into the western world with the influence of figures like Alan Watts and Frijof Capra, author of  The Tao Of Physics (1975), the question began to spread as to whether quantum physicists were in fact observing phenomena with electron microscopes that had already been observed thousands of years before via mediation.  What has been even less known is that the founders of quantum physics were in fact students of the vedic texts, and were not just accidentally observing similarity.  They were looking for it, and found it. Neils Bhor stated that he would ‘go into the Upanishads to ask questions’. Werner Heisenberg shared that ‘quantum theory will not look ridiculous to people who have read Vedanta; and Irwin Schrödinger thought that ‘the unity and continuity of Vedanta are reflected in the unity and continuity of wave mechanics.  This is entirely consistent with the Vedanta concept of All in One.’

You are not a drop in the ocean. You are the entire ocean in a drop. – Rumi 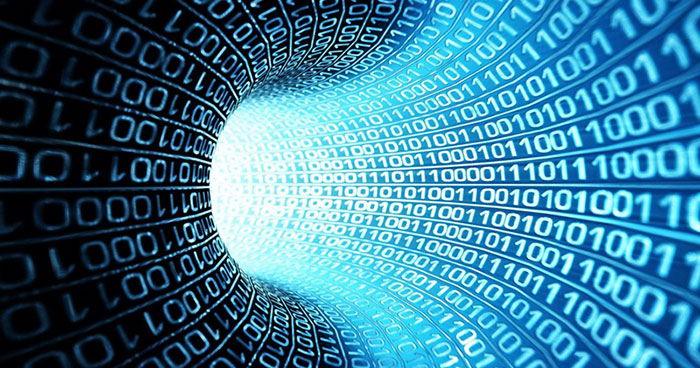 In 1999 The Matrix took questioning reality to the masses

From Recent History To The Not-Too-Distant Future

In the 90s, ‘dark poet’ comedian Bill Hicks helped awaken a generation with statements like his positive news story: ‘Today a young man on acid realised that all matter is merely energy condensed to a slow vibration, we are all one consciousness experiencing ourselves subjectively. There’s no such thing as a death, life is only a dream and we’re the imagination of ourselves… here’s Tom with the weather’, as well as his beautifully inspiring Just A Ride riff. Then, by the end of the 90s we had The Matrix.  Like no piece of media before it, The Matrix was a pop culture breakthrough causing the very question of whether reality is actually real to be considered at least once by the tens of millions of people who have now seen it.

In the years since the turn of the new century, science has gained the courage to openly explore topics like the holographic universe theory, the relationship between consciousness and matter and even the once banned subject of psychedelics as medicines. We may well be witnessing a generational change on the kind of scale that Thomas S Kuhn was referring to when he coined the phrase ‘paradigm shift’ in his seminal 1972 book The Structure Of Scientific Revolutions.

A scientific truth does not triumph by convincing its opponents and making them see the light, but rather because its opponents eventually die and a new generation grows up that is familiar with it. – Max Planck, one of the other fathers of quantum physics

Will this paradigm shift bring a full re-unification of science and spirit? Speaking on behalf of those who seek truth as much from outside the boundaries of rational reductionism as within it, I really hope so.  I know if I was a scientist, I’d have my mind on catching up with the the ideas of Nicola Tesla, (well known to have studied the Vedic texts); a man who like Copernicus, was born at least a hundred years before his time.

I know for a fact that it is a simulated matrix, there is truth in dark energies and light, the dark energies are very aware that this is simulated they do not want people of true love and light to wake to this truth and will try to kill you for exposing it. But it is being exposed, those who say we need a balance of dark and light are wrong, if we concentrate on taking the corrupted dark energies out of control we will have a world of nothing but light, my dream is that this is happening and it will, everyone should be living in an abundance of wealth in all ways not just a small majority of greedy dark entities. It is time to flip this mirror and let true Devine love and light run this world that is “portrayed” before us especially if we wish to continue to experience the human lives we are.

Is the Universe a Simulation: NY TIMES
https://www.nytimes.com/2014/02/16/opinion/sunday/is-the-universe-a-simulation.html?_r=2

“All reality only exists in the mind. The outer phenomenon, that which appears, is only its outer expression. The visible universe is the reflection of the invisible.” – Plato

“The world is nothing but an objectivized dream, whatever your powerful mind believes very intensely instantly comes to pass”
– Paramahansa Yogananda

“It is a good viewpoint to see the world as a dream. When you have something like a nightmare, you will wake up and tell yourself that it is only a dream. It is said that the world we live in is not a bit different from this.” – Hagakure: The Book Of The Samurai

Tedx Talk on why we are a simulation

‘There is no reality except the one contained within us.’ – Herman Hesse

‘The first gulp from the glass of natural sciences will make you an atheist but at the bottom of the glass god is waiting for you.’ – Werner Heisenberg

0
Reply
PrevPreviousBecoming a Custodian of the Land
NextShould we be Measuring Gross National Happiness?Next