Innovative Design in Harmony with Nature

Bamboo is the future. It is the most beautiful, versatile, tallest and strongest material that we could possibly choose. The rainforest is almost gone, plywood is mostly made from the rainforest and cement has a carbon load that is not going to help the future. That leaves us with bamboo and if children plant bamboo today, then in just a few years they will have timber ready to go and it will be replenished every year for the rest of their life.

Though bamboo has traditionally been used throughout Asia in short-term structures, new treatment methods have given it a capacity for a much longer life. Engineers, architects and designers have now created a completely new design vocabulary. Not only is bamboo good for the environment, but it also helps the people living in the space to connect with nature. 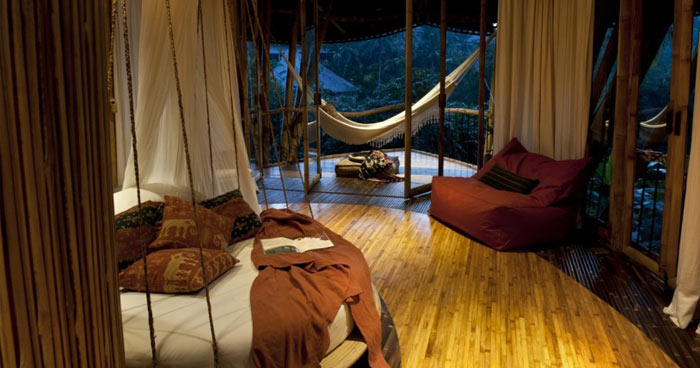 Living in a bamboo environment

Throughout Asia, bamboo has always been regarded as sacred, symbolizing grace, strength, flexibility, endurance and longevity. The mystique and beauty of the bamboo forest is one of the most common themes for paintings and jade carvings. Ancient Chinese literature held bamboo in profound esteem:

Bamboo is a symbol of the harmony between nature and human beings.

Bamboo is strong, with the compressive force of concrete and the strength-to-weight ratio of steel. 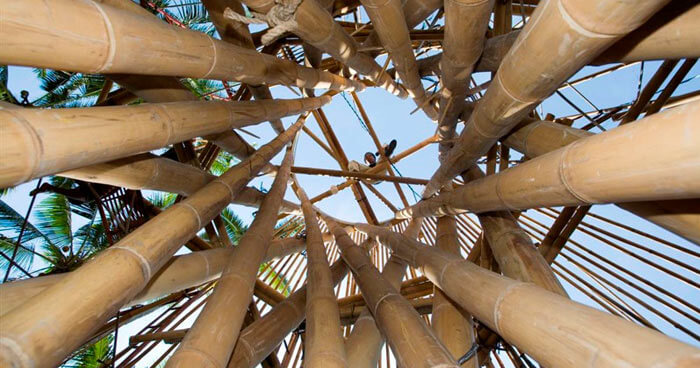 With very little attention, a bamboo shoot can become a structural column within three years, and that building could stand strong for a lifetime.

With its three-year growth cycle and carbon sequestration it is a uniquely efficient and responsible resource. Even sustainable timber can’t begin to compare with bamboo as a conscientious building material.

Though bamboo has traditionally been used throughout Asia, new treatment methods have given it a longer lifespan. Ibuku, a Balinese company who specialize in innovative new designs, selectively harvest bamboo from local sources, it is then treated ecologically and lab tested to confirm its durability and integrity.

Ibuku designs and builds with bamboo. The materials they use, the people they work with and the land they build on all inform their design process. The traditional skills of Balinese craftsmen, combined with Ibuku’s design ideas and modern engineering enable them to create original bamboo structures that meet the needs of a diverse clientele. 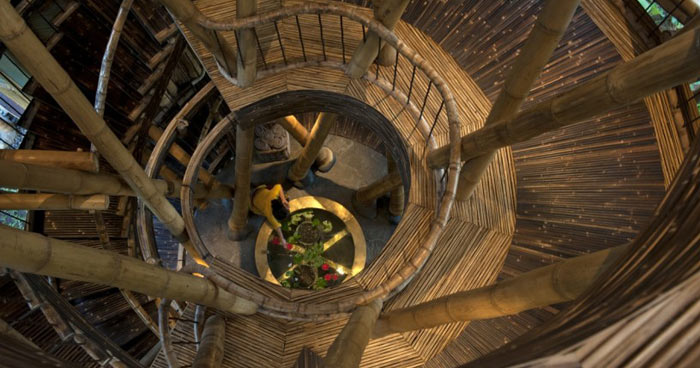 Ibuku’s origins lie in the belief that bamboo can change the way we build. It began with the work of a woman named Linda Garland. She was sailing in Indonesian waterson a traditional fishing boat with a giant bamboo outrigger. Amazed by the size of the bamboo, she asked the fishermen to take her to the place where it grew. This was the beginning of a journey that led her to start the Environmental Bamboo Foundation in 1993 to research and experiment with bamboo as a long-term sustainable building material. Her efforts have captured the imagination of the world.

Linda’s work also inspired her friend John Hardy to take a greater interest in bamboo. John soon came to see bamboo as the future of sustainable building and made a vow never to construct another wood or concrete building. 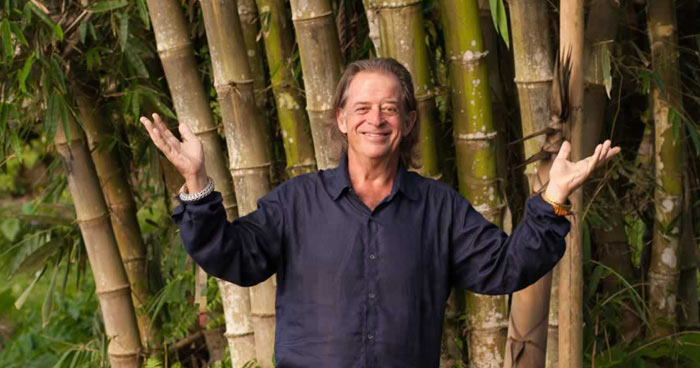 John’s first serious bamboo building was conceived with architect Cheong Yew Kuan in a rice field full of tall Umbul-Umbul flags. Inspired by the natural curve of the bamboo, they tied the tips of the poles together into a towering arch. This ultimately became Kapal Bambu, the ‘bamboo ship’ showroom at the John Hardy compound in Bali.

John’s next building, the Minang House, reflects the exact proportions of a traditional Sumatran clan house, as measured and translated into bamboo by architect and Fulbright scholar Miya Winter Buxton. Traditionally made out of rainforest timber, this Minang House, built for the Bambu Indah Hotel, was constructed entirely from black Petung bamboo and has pioneered many bamboo joinery and flooring techniques. John likes to call this building “a new kind of cultural imperialism”. 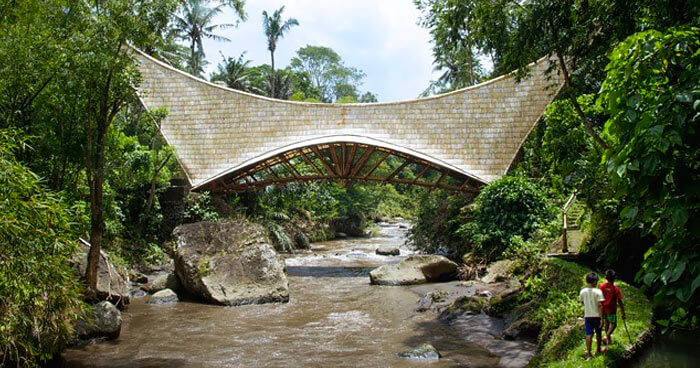 A bridge at Green School

In late 2007 John gathered a team to design and build the Green School. The first structure at Green School was a bridge, connecting the two sides of the river valley campus. It stands as an outstanding example of what is possible when architects, engineers, designers, and craftsmen come together to build in a new way. The construction of Green School led to many innovations in bamboo architecture and engineering.

Joerg Stamm, a German builder who specializes in bamboo, was a key contributor to this process along with artist Aldo Landwher. Together they are responsible for developing many of the design aesthetics and engineering concepts used by Ibuku today. Jorge developed the concept of creating central basket-like towers to hold up larger buildings. 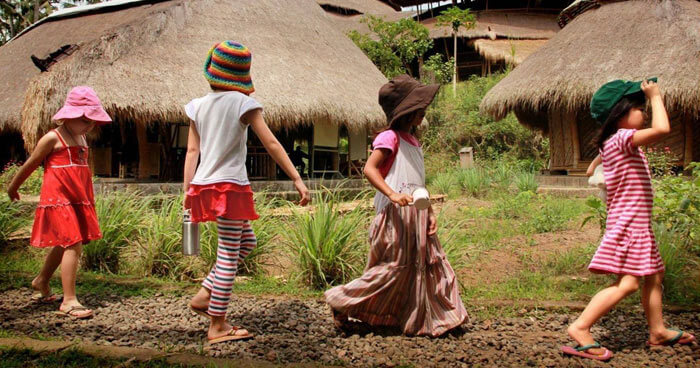 In 2010 Elora Hardy, John’s daughter, returned to Bali to continue the evolution of bamboo design under the name Ibuku. Together she and her team of talented Indonesian designers and architects have built forty new bamboo structures in Bali. Many of these buildings now make up Green Village, a community of luxurious private homes and the neighboring Green School. Ibuku continues to expand the potential of building exceptional bamboo structures and provides a fascinating example of just what can be achieved with a creatively different and elevated mindset. 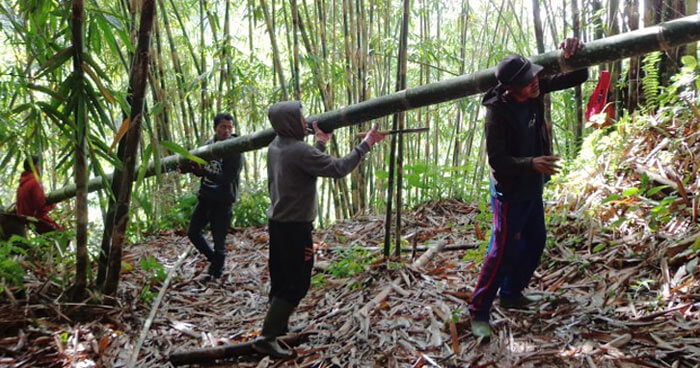 Bamboo is carefully selected from the river valleys and mountains of Bali and Java. It is harvested from clumps that, once established, grow a new generation of shoots each year. It takes just a few months for a new bamboo shoot to reach its full height, and in three years it becomes timber ready for harvest. Ibuku takes great care to ensure that only the mature poles are harvested, creating an incentive for the farmers to allow the younger generations to grow to maturity for subsequent years’ harvests. 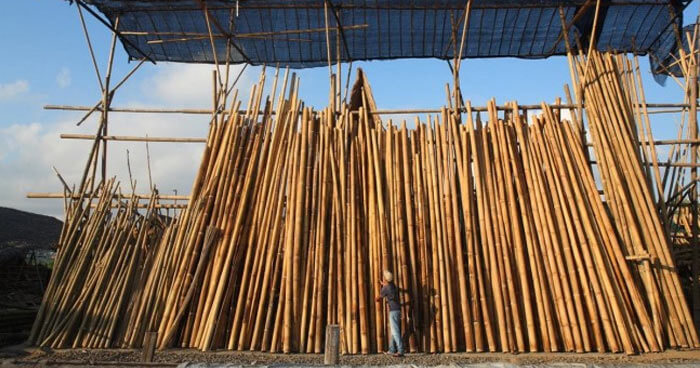 In the past bamboo buildings were susceptible to termites and powder post beetle infestations that would eat the bamboo. Bamboo is consequently treated with a boron solution. It is a naturally occurring salt solution that renders the bamboo indigestible to insects. It has a toxicity just 1.5 times that of regular table salt. The solution is re-used in a closed-loop system. 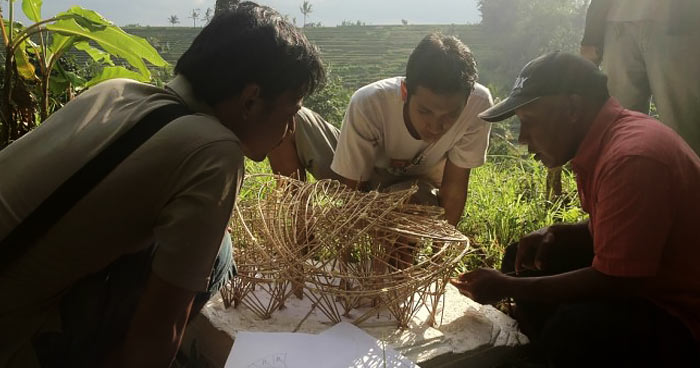 Design is of the land, for the land. Instead of conventional blueprints, scale structural models are first created that are made of hand-whittled bamboo sticks. These models are replicated in 3D line on a computer for the architects and engineers to study and confirm. 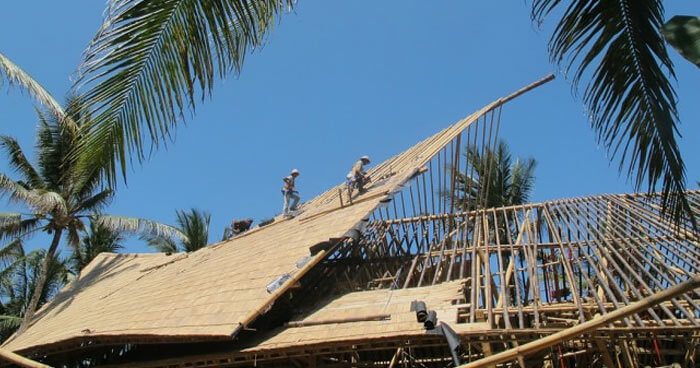 Ibuku has collaborated with teams of skilled bamboo craftsmen, many of whom are descended from generations of wood and stone carvers. Their age old traditions are now evolving in line with new designs that are built almost entirely by hand.

While the structure is in progress, an interior design team custom designs furniture and interiors for each structure that is built. Craftsmen combine their traditional skills with modern carpentry techniques to produce bamboo furniture. They transform poles of bamboo into floors, walls, baskets, railings, beds, chairs, kitchens, ceilings, stairs, and tables. 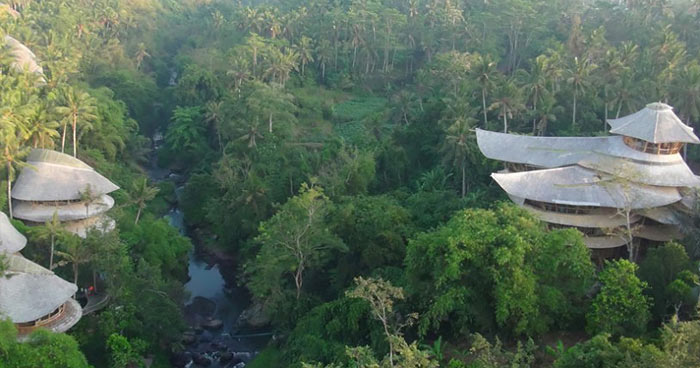 Ibuku is basically reinventing the rules and standards of what a building can look like. Their buildings are a testament to the power of bamboo and the possibilities of sustainable architecture.

For more information on this exciting project you can go to ibuku.com.

I think I will build my ashram out of bamboo. So beautiful. And I love that it is renewable.