Welcome to UPLIFT
Features
Indigenous Youth Tackling Oppression Through Music
This project is empowering young people to share their culture with pride.

Barefoot under the stars on the red desert sand, a group of young ones from the most ancient continuous culture in the world are bringing their primaeval stories alive.

Using the medium of dance and song in their own unique way, Indigenous youth are proudly singing their communities home, continuing the age-old stories of wisdom and creation from their ancestors. The songs are a celebration of culture, songline, connection to the country, and pride in Australia’s Indigenous heritage. In a country where their culture has been ravaged by oppression, illness, prejudice and the systematic destruction of their traditional way of life, these songs are a lifeline.

The projects are facilitated by Desert Pea Media, working in collaboration with remote Indigenous Communities across Australia, to empower youth to develop pride in their heritage and share, through artistic expression, the ancient culture flowing through their veins. A charity established in 2002, Desert Pea Media works with young people and communities in remote and isolated areas to create change through collaborative storytelling. 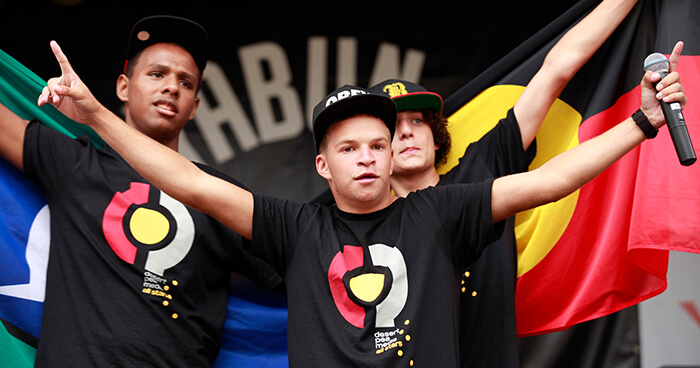 Sharing their projects gives the kids a sense of pride in their work and their culture.

The young Indigenous groups are rapping about the issues facing their communities and tackling political problems, such as disenfranchisement, with their funky yet punchy lyrics. The Creative Director of Desert Pea Media, Toby Finlayson works with elders and community leaders to meet the needs of the community and explore local cultural and social issues in a creative and fun way. Ownership of the artistic and storytelling process is with the students.

Our work is about creating a better, more inclusive and respectful Australian popular culture. The ultimate aim is to short-circuit the structures of inequality through intergenerational expression of cultural and social issues, focusing on solutions and positive choice… We use a language that young indigenous people speak fluently and that’s popular music and urban music. Hip Hop, R’n’B and reggae. Young people really respond to the conversation around oppression, race and poverty and all that stuff that comes through Hip Hop. – Toby Finlayson.

The loss of their culture and land has nearly obliterated the world’s most ancient people, and it is the Indigenous youth who are suffering the most from this disintegration of a strong community. Policies such as land grabs, forced removal, and the effects of the stolen generation have caused the decay of a self-sustaining, ancient, wise system of life which supported Indigenous people for thousands of years, on the most arid continent in the world.

Desert Pea Media has worked with communities all across the Australian continent with fantastic results.

Our system sets up young Indigenous people to fail in education, health, and employment. The whole system that we’ve put in place in remote communities is not made for Aboriginal people. So to set up a program that sets young people up to succeed is a really valuable thing. So it doesn’t matter if they’ve never rapped before or can’t read and rap. Our process is built so they will succeed no matter what.

Walgett Community College, known as the worst school in the state of New South Wales in 2016, with a long and troubled history of violence, anti-social behaviour and disadvantage, was given new hope with a recent project with Desert Pea Media. The song and video, Dhinawan – Touch the Stars, was written, recorded, and filmed over five days with a group of young Indigenous students enrolled at Walgett Community College in remote north-west NSW.

Watching the kids engage with the meaning of this song, our songlines made us all proud. Seeing them connect to culture when listening to stories told by elders in the community is just great… With support of teachers and Desert Pea Media – turning this treasured Dreamtime story into their own style of hip-hop song, something relevant to them is even better…You could see them exude confidence and shine with pride along with their parents and family who share that pride also. – Rosalyn McGregor, AEO Walgett Community College.

‘Dhinawan’ is the Kamilaroi word for ’emu’, and the song title refers to an ancient Kamilaroi constellation etched into the negative space of the milky way. A powerful and sacred Indigenous songline, the Dhinawan story shifts and changes as it travels from nation to nation, and is the foundation of this particular production. 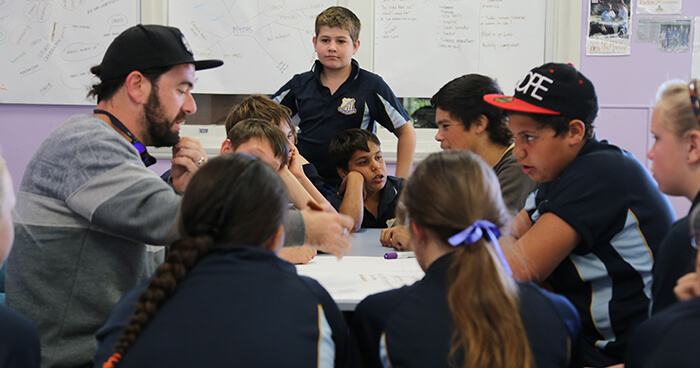 The kids get to feel a part of something exciting; something that’s their own.

This project is the sequel to the recent releases by B-Town Warriors – including People of the Red Sunset, a project with high school children from the remote town of Bourke, which was picked up by a popular Australian nation-wide radio station: Triple J, as well as by RAGE TV and MTV Upload.

These songs, from these young people help express their world in a way that builds esteem and pride.

Our objective is to create change through creative storytelling. We try to empower young people’s mantras that have hope, truth and positivity. We developed the process over a decade working in remote indigenous communities using storytelling, music making and filmmaking as a tool to create a dialogue around cultural and social issues.

We work in communities where the mission and White Australia policy was very evident. There is a lot of cultural loss and identity and self-esteem issues. In every community, there is always alcohol, drug issues and trauma. – Toby Finlayson

A 2016 study showed that remote Australia is in the grip of a suicide epidemic. More Indigenous children in the outback are killing themselves than anywhere else in the world. The report also found that Australia had improved in all domains except youth health and wellbeing, where it had gone backwards, against the global trend. There are tremendous challenges facing indigenous youth in Australian and these alarming statistics show that, so projects like Desert Pea Media are a lifeline for many young people in remote Australia.

These statistics are one warning signal of the tremendous challenges facing indigenous youth today. Programs like Desert Pea Media have a huge role to play in supporting the wellbeing of indigenous Australians. Elders say the youth are losing their sense of identity and worth. It all started with the loss of connection to their land, culture, elders and the old ways.

Desert Pea Media turned it around, gave us kids a reason to come to school and work together with each other instead of arguing and fighting one another. – Michael Graham, participant, Collarenebri, New South Wales.

Michael Graham, or MC Boomalli as he is now known, first took part in a Desert Pea Media project when he was 14 years old. For the past 6 years – Mick has been involved in an ongoing mentoring program with them, and participated in discussions about real issues in his community, such as the effects of generational trauma, the importance of cultural pride and, most importantly, creating a positive future for young Indigenous Australians. His music is a direct reflection of these experiences and his desire to be a leader in his community and the world.

‘People of the Red Sunset’

He has since gone on to release a debut album, been awarded the Young Citizen of the Year for 2015, in recognition of his service as a Youth Worker and cultural ambassador, and today works more closely with Desert Pea Media as a valued full-time staff member on projects across Australia, along with being a popular musician in his own right.

One of our favourite quotes, which has been spoken by visual artist, activist and academic Lilla Watson, and which she says was collaboratively written by Aboriginal activists in Queensland in the 1970s, is: ‘If you have come here to help me, you are wasting our time. But if you have come because your liberation is bound up with mine, then let us work together.’  We believe that OUR cultural liberation as Australian people is bound up with the liberation of the First Nations of Australia. – Toby Finlayson.

In a country where their ancestors were hunted and stolen from their families, and today Indigenous people live in Third-World conditions in a First-World country, this project is giving power and a voice to the youth. Hopefully, in years to come, it will support the creation of vibrant and alive indigenous communities that can find a new way to thrive in a modern world, carrying their ancient wisdom deep into the future.

And tat vvery last thng is vital, because no matter how gokd
an event is, nothing makes a party great like the perfect,
personal party decorations you choose. Flowefs come in a selection of
colors, of course, if you add stems and vines, yoou will gett an amazinbg custom tattoo design. In most cases
this isn’t a challenge as users can order prints from the sharing site.