How Yoga Transformed a Soldier’s Life

Our whole life can change in an instant… and those instants rarely come as we would imagine. As a soldier of the Australian Defence Force, you are trained to do many things, but spending a night in the morgue with the deceased bodies of five of your friends is not one of them.

In a recent conversation with UPLIFT, former Australian Defence Force soldier and officer Todd Berry shared a glimpse into his intense journey of post-traumatic stress disorder (PTSD) and the incredible transformation of his life through the power of yoga, mindfulness and meditation. What follows are a few excerpts from our conversation.

On an unassuming day in 1993, during a peace-time mission in Malaysia, twenty-three-year-old Australian soldier Todd Berry found himself at the scene of a vehicle accident that claimed the lives of five of his friends. After attempting to resuscitate members of his team at the scene of the accident, Todd was tasked with the mission of returning the bodies of his deceased comrades back to their families in Australia – a process which involved sleeping at the morgue, witnessing autopsies and notifying the loved ones of his friends prior to sending their bodies back to Australia.

Being posted in Malaysia meant Todd drove past the site of the incident every day for a two-year period; it was during this time that a chronic condition of post-traumatic stress began to set in. Fast forward fourteen years, following on from additional overseas assignments and a few more hard-hitting experiences in the field; Todd was medically discharged from the ADF, leaving him (in his own words) “a bit of a lost soul”.

“I had a lot of nightmares, so I also became an insomniac because I was afraid of going to sleep. So I’d be awake all night, then I’d sleep all day. I developed a very significant alcohol dependency in order to sleep and numb the pain. I was irritable, angry, hyper-vigilant and depressed. Life was very flat and very low. I didn’t like leaving the house or going out in crowds of people I didn’t know. And because the primary incident was a motor vehicle incident I was very anxious on the roads. I attempted suicide in 2009, was in a coma for two days then spent six weeks in a mental health hospital and have had many in-house visits to mental health facilities since. But in the last twelve months, all of that has stopped.” 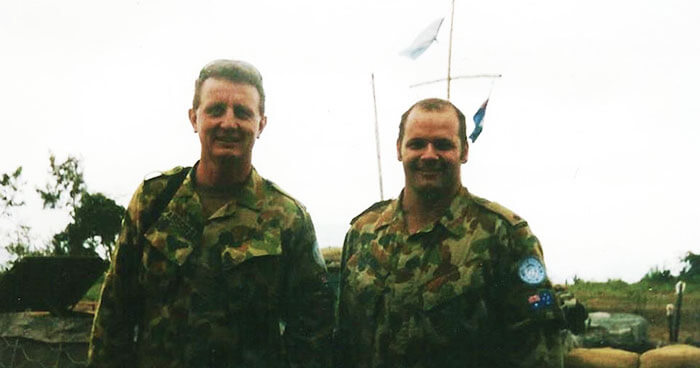 According to the Australian Centre for Post-traumatic Mental Health, PTSD affects approximately 800,000 Australians. While prevalent in high-risk occupations, this type of stress can impact anyone who has been exposed to highly-charged emotional and/or life-threatening events involving themselves and others. The strain this places on the nervous system and often uncontrollable replaying of former incidents in the mind puts PTSD sufferers into a chronic state of flight or fight.

In 2014, Todd was introduced to Soldier On, a charity organization that looks after men and women who have served Australia in the Defence Forces, police and fire departments. This gave Todd a chance to connect with others who have been affected by their time of service. He was put in touch with yoga and mindfulness coach Rob Ginnivan, who had begun doing yoga sessions for the Soldier On group at no cost.

“My first session was a real struggle. I was twenty kilograms heavier than I am now and couldn’t even make it through a whole session without having to stop and rest. I found it really difficult to coordinate my breathing with the different postures and movements. It was probably a good six months before I felt comfortable doing a session start to finish.”

“(Laughing) I’m still not very flexible compared to a lot of people who do yoga and I think that comes from a lifetime of having not looking after myself in the Defence Force. But that is something I’m working on. A lot of people are intimidated by yoga and stuck in the negative stereotypes about it, but you don’t have to be able to put your foot behind your head to get the benefits.”

Now fifteen months into your yoga practice, what has been the impact on your body, your mind and your life?

“I approach things very differently now. The glass is more half-full, where it used to always be half-empty. I’m a lot calmer. Not so quick to temper. Physically, I am 20 kg. lighter and I feel fit and strong again. This may be a strange one, but I also feel a lot more confidant. When I was diagnosed with PTSD I lost a lot of confidence and I really feel like I’m getting that back.  It’s probably not one of the things that people who associate with doing yoga but it has helped me tremendously.

“I’m still not out of the woods yet but my progress has been quite exponential in the past 12 months, and I’m really grateful for that. Guided mindfulness exercises and meditation in the past six months have also helped. It’s great to have Rob in my corner to pick me up when I need it.”

What’s the path forward for you now, with your yoga, meditation… and beyond?

“I’m always happy to continue practicing but one of the higher goals I’ve had in the past couple of years is to help the wider Defence Services community. I have done psychology training, but I believe that with yoga I can actually reach a lot more people than through one-on-one counselling. And a lot of the psychological issues have a way of working themselves out when you feel better in your body. 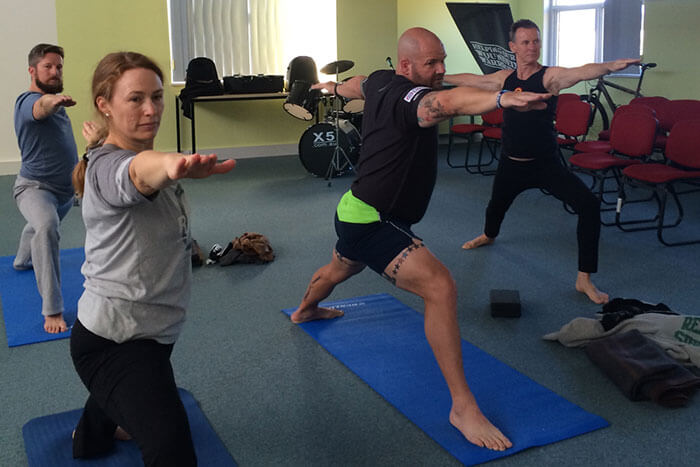 “I’m starting yoga teacher training next month. I’m not in a position to be a teacher yet but I am in a position to be able to spread the benefits of yoga to other men and women who have been in the Defence Force and have been affected by their services. I’m hoping if they see someone like me (a “boofhead”) on the mat, it will make it easier for them to join in and they will see the benefits of it.”

What message would you have for others out there who may be suffering from PTSD or any other chronic, life-force limiting condition?

Don’t listen to the stereo types. Just give it a try. I think that yoga is for everyone. It doesn’t matter what size or shape you are, what age you are. The philosophy and the way of being – it is such a powerful medium.

I still struggle to get into a lot of the positions and have correct alignment. I understand it’s a journey and may take ten, fifteen, twenty years but that’s OK. It’s a journey worth taking. It may not work for everyone, but I’d be surprised if it didn’t.”

Lastly, what’s your favourite pose and why?

(Laughing) “Gee, I’m pretty lazy so I like the laying down poses. Lotus pose or the Fish pose probably. Laying on our back with your head tilted back with a guppy fish look on your face. I like that.”

Able to Be Present

Because of the often uncontrollable replays of former events in the mind, founder of the Trauma Centre at Justice Research Institute in the US, Dr. Bessel van der Kolk summarizes PTSD quite simply as an “inability to be present”. It is powerful to consider that among all the activities and practices, research is now showing that those which are most successful in treating this condition are yoga and mindfulness practices; activities which require us to bring our focus and energy into the present moment.

While we may not have all been exposed to the same level of intense experience or symptoms as Todd was, there are aspects in each of us that are consistently pulled away from this moment into stress, worry and replaying of moments with fear from both the past and the future. Imagine what would be possible if every one of us were committed to building a daily practice that enabled us to truly be present in the moment we are in. As Todd puts it:

There’s a real ripple effect out into society when we have more and more people doing this type of work, feeling calm and bringing that energy out into the world. If I’m just one person and I feel this different, imagine the impact of all of us together.

Dear sir/ma’am,My name is Arun rathore and I am yoga professional and therapist. I have more then 19 year of experience. I want share my knowledge for that I need your help. I want to work with you and for Nation, for betterment of people those who are suffering from different problems. Previously I worked with renounced clubs and institution in India, Latvia and presently in Dubai. I have done my yoga education from India’s number one institute and done my yoga teacher training also. My email address is [email protected].
Contact no. +971 564596141