How to Start a Happiness Revolution

Dr. Hunter (aka “Patch”) Adams, is a medical doctor, social activist and a clown, who, for the past thirty-plus years has woven a pioneering path of truly integrative medicine – merging laughter, joy and creativity into his approach with patients all around the world. As the real-life / true story expression of the Robin Williams film character “Patch”, Dr. Patch Adams has devoted his life to the study of what makes people happy… and how that impacts their vitality. Now he is calling for a ‘Happiness Revolution’!

Chip Richards recently caught up with Patch for a dynamic conversation and glimpse into the childhood, life turning points and key decisions that sparked his journey into becoming a global medical revolutionary and daily instrument of peace, justice and care for humanity and nature.

The following are excerpts from the conversation, (the entire interview can be viewed below).

How to Start a Happiness Revolution – with Patch Adams

Patch, your life is a testament of love in action. When we hear your stories and learn of the places you’ve been and the people whose lives you’ve touched – the war zones, third world countries and places of great need that you have injected happiness, health and a profound lens of vitality into – it’s truly astounding. For readers and listeners out there, we’d love to peel back the layers a little and understand what got you onto this path in the first place. Where did it all begin for you?

I see it more as a flow. For the first sixteen years of my life I had a fabulous mother. I never saw her angry, mean, unkind, unjust, ungenerous. She loved my brother and I. We grew up on army bases outside the US and I was a skinny nerd, dweeb, dork, sissy boy, so I started clowning not to be funny but to save my ass. Because if you could make the bullies laugh they didn’t hit their fool.

My father was a professional soldier and the first earthquake was him dying from war when I was sixteen. We moved back to the US in 1961 and for the first time, I was confronted by the lie of our country. Our black population in the south had no human rights. They couldn’t use a toilet or a drinking fountain or a restaurant or hotel of a white person in the “Land of the Free”. I realized my country was fake, religion was fake and the adult world was an embarrassment. My first reaction was to want to die. I didn’t want to live in a world of violence and injustice… So I had three mental hospitalizations in one year (between seventeen and eighteen) from wanting to kill myself.

In 1963, at age eighteen, I was present at Martin Luther King’s “I Have a Dream” speech and there were a million non-violent revolutionaries there. I recognized myself as one of them.

I still needed another hospitalization and in that third hospital the lightening struck and I changed forever. I realized you don’t kill yourself … You make revolution.

What does it mean to “make revolution”?

At age eighteen, I made two decisions:

1. To serve humanity and medicine. I knew that my country didn’t care about its people and that medicine was a vulgar greedy business even then… and I was going to be a free doctor. A free, loving doctor.

That was the easy decision. The harder one was:

2. To make myself an instrument for peace and justice and care every moment. 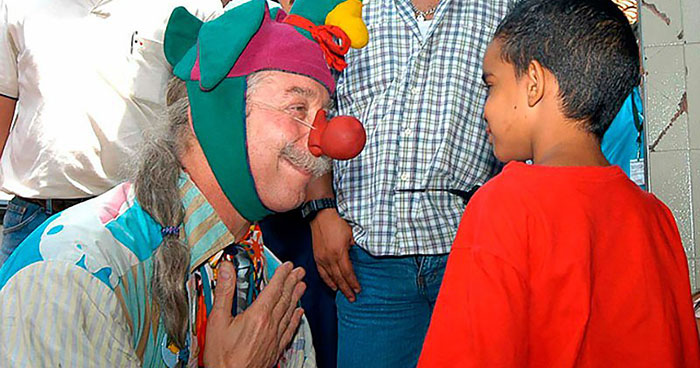 “An instrument for peace and justice and care every moment”

How do you become an instrument of peace?

I decided to live six qualities from the moment I woke up to the moment I went to bed, six qualities – happy, funny, loving, cooperative, creative and thoughtful. So I have been ragingly doing that every day for fifty-one years, and it’s taken me on a lot of journeys.

I designed a hospital in 1971 that didn’t charge money. In fact we wanted to eliminate the idea of debt in the medical interaction. We didn’t want anyone to think they owed something. We wanted them excited they belonged to something called a community that is a nest of care for them. I think some of the most forward thinking we did was that instead of the traditional five to ten minute initial interview with a patient, we do three to four hours. And the idea is that we fall in love.

When I started this no one gave us a hospital so twenty adults (three of us doctors) and our kids moved into a large six bedroom house. We ran a twelve-year pilot where we had five-hundred to one-thousand people in our home each month and five to fifty overnight guests a night. We integrated medicine with performing arts, arts and crafts, agriculture and nature, education, recreation and social service … until we ultimately realized it was more important to raise funds to build a model hospital because what we were doing was adorable and frontier-like, but it wasn’t anything someone could copy or replicate.

“So we started our clown trips”

Since 1985 I have been a fundraiser. By going public I became a speaker so I have been on the road mostly three-hundred days a year for thirty years, in seventy-eight countries, lecturing and performing and fundraising. I started missing caring for patients – which is really who I am at my core … So we started our clown trips so I can have an active role in care. We do six to eight trips a year, all over the world. We’ve been doing it for thirty years. We’ve started to take care of orphans in Russia, we have a project to stop child sexual slavery in the Amazon… we are here to end market capitalism which we think is the worst disease in our history and the probable cause of our extinction.

It is incredibly heartening to hear a glimpse into your story and the steps you have taken from those two clear decisions at age eighteen.

It was easy. My mother gave me self esteem so I never wondered if I could do it. I just had to decide to do it.

And what do you do if you wake up one morning and you don’t feel good?

It hasn’t happened. One choice in life is to wake up and already have decided who you are going to be. You heard the six qualities (happy, funny, loving, cooperative, creative and thoughtful). So all I have to do is be present, what the Buddhists call mindful. Feel the present and then choose the performance in that moment that best puts my intentions forward. I notice how I did, then I’m right back to going, “What are my intentions? What is my performance?” So, I actually don’t have any free time.

That is key, what you just said.

I never have a problem. I decided at eighteen, in every moment to make myself.

For those people who are just coming to terms with how to consciously “create our self” in this life, what is a simple step? What’s something every person can do on a daily basis when they wake up to take a step in that direction?

They can chant for a half-hour when they wake up, “I Love Me” until it’s clear to them. Everything that has come from me is because I love myself. I don’t doubt. And I don’t waste time.

I am a wanter. I want peace and justice and care for all people and nature. I know that one person can have an impact. So … I do it. I thrive on a sense of wonder and curiosity and passion and hope.

Thank you so much so much love