How Great Crisis Calls Forth Our Greatness

BY Chip Richards
Welcome to UPLIFT
How Great Crisis Calls Forth Our Greatness
The Earthquake in Nepal is a great crisis, but also a great opportunity to put Love into Action

I was meeting my wife Ash and our son Josh out for a movie, but when they pulled up at the front of the theatre I could tell that something was wrong.  I approached the car as Ash opened the door and instantly she burst into tears. “Dad’s got cancer.”

Ash’s family has always been very close, and having lived on this side of the world for the past twenty years Patrick had been like a father to me as well.  I was in the final weeks of the busiest year of my life – with major commitments stretching me in multiple directions – but with this call came a clarifying sweep through our entire life, evaporating our to-do list into a single course of action.  By breakfast the following morning we had begun the two-day journey to Melbourne, and for the next three weeks our entire world and all of our energy had only one focus – heal Patrick.

At age 74, Patrick was one of those rare individuals who received a perfect bill of health at every physical, but somehow along the way he had masked the rising pain of a disease taking root deep inside. Within a week of diagnosis, doctors had concluded his condition was inoperable, and a week later they released him from the hospital saying there was nothing else they could do.  Family members who hadn’t spoken for years pulled together. Friends who had been absent for decades suddenly arrived.  Where there had been tension, compassion emerged.  Where there had been rushing and distraction, emerged patience and presence. In the rising currents of crisis, each person was drawn into the moment in unexpected ways, and a thread of deep purpose, heart focus and meaning united us all. Looking back now on what was to be his last three weeks of life, I can see that while we all thought we had gathered to heal Patrick, in a deeper sense, he had given us a healing opportunity to come together and for a moment in time, remember who we really are.

The peaceful lives of more than 8 million Nepalese people are violently interrupted by a 7.8 earthquake.  Close to 3 million people are displaced from their homes, more than 400,000 buildings are damaged or destroyed, leaving over 19,000 injured and claiming more than 8,000 lives. Entire towns and villages are shaken down to rubble, leaving survivors huddled together in the freezing rain with no food, no water,  no shelter. 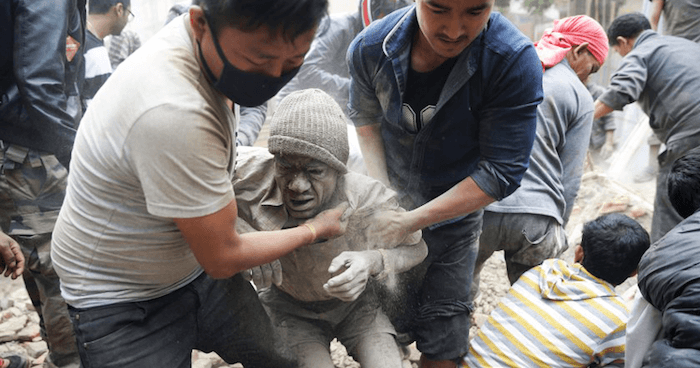 Man being pulled from the rubble after first earthquake in Nepal.

…and a within a few hours after that, something else begins to emerge: One of the largest humanitarian outreaches of support in our planet’s recent history.

Often times when disaster strikes thousands of miles away from our own life, we are left with the feeling of wanting to help or support, but not knowing exactly how or where to begin. On April 27, in response to the widespread social media circulation of hashtag #PrayForNepal and a lively online debate about the best way to really help those suffering on the ground, UPLIFT posted an article titled “Does Praying for Nepal Help?”, proposing a path which bridges our prayers and intentions into real world action.

In a similar vein, I once heard a Tibetan monk speaking about the essence of prayer and meditation and his closing remarks have stayed with me ever since.

“True prayer doesn’t happen sitting on a cushion.  The essence of prayer and meditation is what we do in our lives after we sit on the cushion.”

While the level of devastation, challenge and pain continue to reveal themselves on the ground in Nepal, what we have also witnessed in the days and weeks following the earthquake, is a rising number of people whose deep desire to help is calling them into  fresh, bold, cooperative action.   From full scale charity and aid organisations to grassroots ventures forming themselves on the fly – creating  direct pathways for people to send real support – the earthquakes in Nepal seem to have lit a torch in the heart of humanity, propelling us into action.

Within days after the quake, I received a series of notes from my brother Scott (a mountaineer in Colorado) who was galvanizing friends in the climbing community to put together a personal shipment of tarps and rope. Simultaneously, 11-year old youth founder of the Stardust Foundation in Australia, Holley Somerville-Knott was organizing a bake sale at her school (aka. #BakeForNepal), raising thousands of dollars to support a village orphanage, and in our small local town of Mullumbimby, a one-night music benefit (the first in a series) brought in $20,000 of support.

And while the burden of the disaster is immeasurable, the feeling of bringing Love into Action and helping those in need is like an elixir to the spirit of all who are answering the call – drawing people into their heart and uniting them with a sense of purpose that knows no boundaries.

“It is our essential human nature to respond to life with care and compassion. This is an invitation from life to directly experience how natural it is for all of us to operate from love, not just when a disaster happens, but for each one of us in every moment.” – Bharat Mitra, Founder ORGANIC INDIA

Shortly after the earthquake revealed the massive need for shelter on the ground in Nepal, ORGANIC INDIA employees in India began a #LoveInAction campaign, donating a significant proportion of their own salaries to pay for truckloads of #TentsToNepal  canvas and sewing machines to be sent for the construction of medical camps and temporary accommodation. ORGANIC INDIA founders have matched and increased the effort, as well as sending herbal medicines and food supplies.  Here at UPLIFT we joined the #TentsToNepal mission and together we (YOU!) have already raised $11,000.

By the time their first truckload reached the field, ABARI had already sheltered 5,000 people covering three entire villages in the area. Now with the support of #TentsToNepal, BELIEVERSand Avaaz, another 50,000 people in six districts have been reached. Humble offerings which are graciously and so gratefully received by those who have lost ancestral homes passed down for generations. 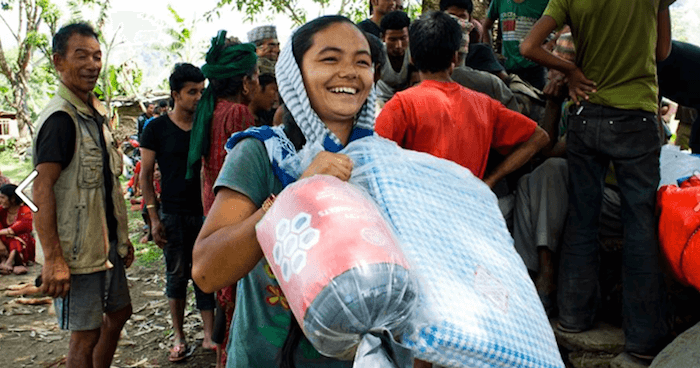 Between ABARI and Learning Planet, there is an on-the-ground network of engineers, pilots, planners, statisticians, social scientists, doctors and construction workers who are tirelessly devoted and now experimenting with larger and longer lasting yurt-style designs. With their expertise in the field of bamboo and low cost construction, ABARI are now in dialogue with officials in Gorkha to build the community spaces and transitional schools required throughout the district. There is significant interest in sustainable alternatives as Nepal starts planning for the largest reconstruction effort in the country’s history.

As the next truck convoy of #TentsToNepal is being loaded with canvas, rope and supplies,  there is a growing wave of #LoveInAction emanating from many people, organisations and areas of the world in response.  Amidst this we are each given an opportunity to discover our unique contribution to the whole. That aspect of ourselves that craves to express itself fully in the world and play our part in a greater story unfolding. A story where each is honored and recognized for the gifts we bring to the greater circle and together great answers and solutions emerge, opening a path of new possibility, beyond the challenges that we once saw as insurmountable.

This is the collective Hero’s Journey of humanity – to recognize our greatest challenges as our greatest opportunities  (and necessity) to discover new ways of working together and to awaken aspects of ourselves that we did not even know were sleeping.

Perhaps one day we will learn to galvanize our greatness without the need to have a crisis to do so… Until that time let us not lose this opportunity to claim the calling of this moment, to move with #LoveInAction and give ourselves the gift of remembering who we are. One family. 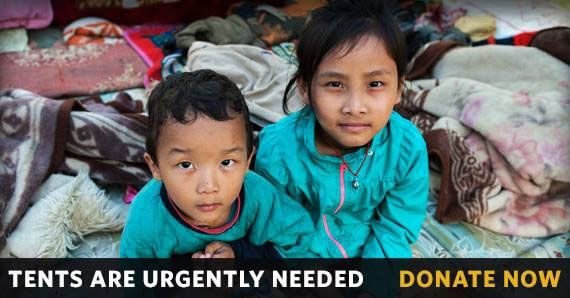