Hearing the Music of the Plants

Science shows us that being near trees and plants significantly improves our physical, mental and emotional wellbeing. Of course, the healing power of plants has long been understood by indigenous cultures who communed with nature and harnessed the power of plants in Flower Essences, oils, or herbs as well as going on nature journeys to heal their body, mind and spirit. Now the possibilities for plant healing have been taken a quantum step further with the arrival of the Music of the Plants.

Forty years ago researchers at the Damanhur Federation of Communities near Turin in Italy started intensive research into plant communication, attempting to prove that plants were sentient beings. They developed a device out of this research, that can read the electromagnetic vibration of a plant and translate it into music.

The machine reads the pulse of a plant and then these pulses are put through an algorithm and a synthesizer within the device, translating it into sound. Just like a musician uses a violin or an oboe to create music, in the same way the plants are using the device to express themselves and make music. The trees and plants learn to control their electrical emissions, so they can modulate the notes, as if they are aware of the music they are producing. 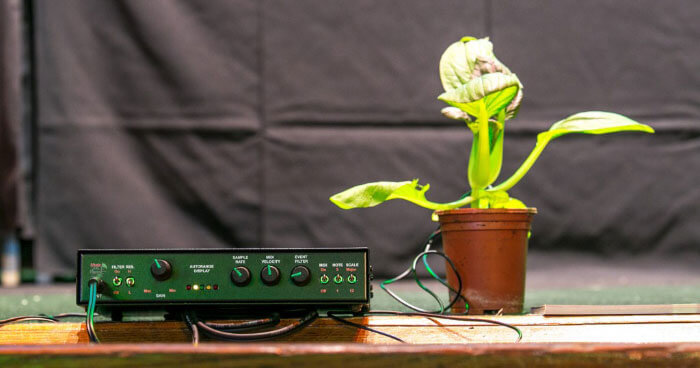 Experimenting with all sorts of plants in the Sacred Forest at Damanhur surrounding their eco communities, they even created concerts with both plants and humans playing together. The device has been used across the globe in Music of the Plants concerts, and people are being touched by the beauty and magic of plants expressing themselves and communicating to us, through music.

One of the most joyous parts of working with the Music of the Plants is the moment when a person realizes that the plant world is not just alive, it is aware. This changes everything. – Tigrilla Gardenia, Plant Researcher, Damanhur

In times gone by when nature was perceived as alive, and in indigenous cultures today, there is a natural connection and bonding with plants, akin to the relationship you would have with your pets. Scientists are now calling this genetically encoded relationship, biophilia. Pam Montgomery, herbalist and co-author of Plant Spirit Healing: A Guide to Working with Plant Consciousness, has been experientially researching the conscious, intelligent nature of pants and trees for over 25 years. She reluctantly researched the Music of the Plants and discovered something extraordinary:

The audible resonance of plants and trees triggers the release of the hormone oxytocin. Oxytocin is the bonding hormone, so common in pregnancy and birth, and it inititates the restorative response in the body, bringing our entire system – physically, emotionally, mentally and spiritually – into homeostasis or balance. 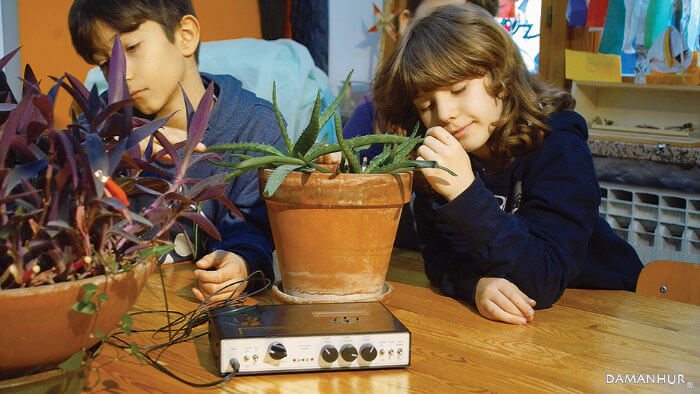 “Once homeostasis is achieved, biophilia – an innate love for the natural world – is achieved, and we can easily understand and know, from the centre of our being, that we are part of a vital, interconnected web of life in which everything and everyone is connected,” says Montgomery.

“My sense is that the singing plants are establishing a new paradigm … where people, plants and nature spirits equally share the gift of stewarding the world. Trees, and their beautiful melodies are what will shift consciousness to a new level where the Earth and all her beings co-creatively thrive.”

The Science of Plant Intelligence

Michael Pollan, expert on where nature and culture intersect, and author of The Botany of Desire: A Plant’s–Eye View of the world and several other major bestsellers on food and agribusiness, says new research in plant neurobiology is showing that plants have astounding abilities to sense and react to the world. 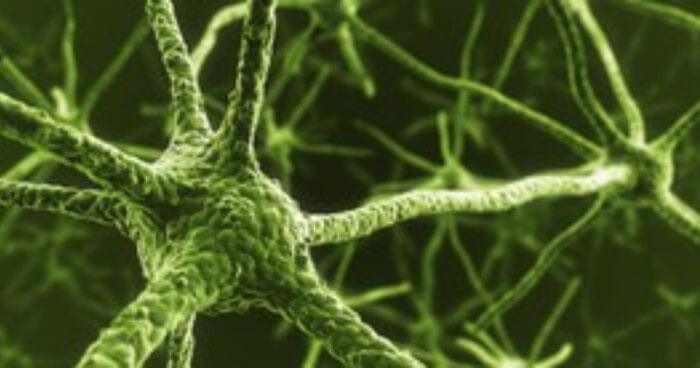 “They have ways of taking all the sensory data they gather in their everyday lives…integrate it and then behave in an appropriate way in response. And they do this without brains, which, in a way, is what’s incredible about it, because we automatically assume you need a brain to process information.”

Leading scientist, Stefano Mancuso, is one of the major founders of the study of plant neurobiology which explores signaling and communication at all levels of biological organization, Mancuso argues in his latest book Brilliant Green, that not only are plants intelligent and sentient but that we should consider their rights, especially in light of the Sixth Mass Extinction. (Currently we’re experiencing the sixth mass extinction of animals and plants in the past half a billion years and the worst spate of species die-offs since the loss of the dinosaurs 65 million years ago.)

“Intelligence is the ability to solve problems and plants are amazingly good at solving their problems,“ says Mancuso. Humans have five basic senses, but scientists have discovered that plants have at least 20 different senses, including, according to Mancuso, the additional senses that can measure humidity, detect gravity, and sense electromagnetic fields. “Plants are wonderful communicators: they share a lot of information with neighbouring plants or with other organisms such as insects or other animals.” 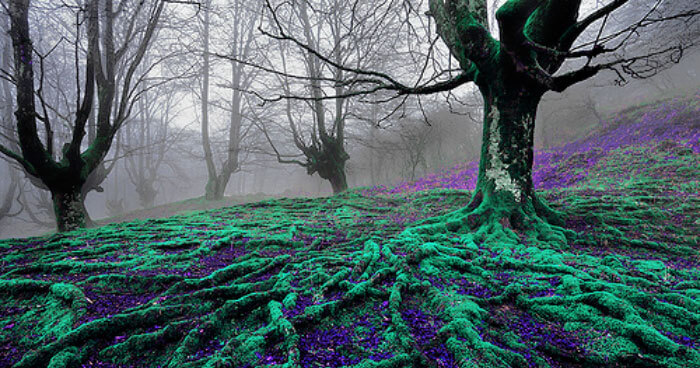 Research shows plants know how to communicate with each other

“In the last several decades science has been showing that plants are endowed with feeling, weave complex social relations and can communicate with themselves and with animals,” write Mancuso and co-author Alessandro Viola, who also argue that plants show behaviours similar to sleeping and playing.

History of research into plant communication

Humans have been studying plants for hundreds of years. One of the earliest plant researchers was Charles Darwin who carried out many experiments with his son Francis into plant intelligence and was able to demonstrate that plants can sense light, humidity, gravity, atmospheric pressure and other environmental factors. He was also the first scientist to recognize that plants are sentient beings. And that because of this they can determine the optimal path for the growth of their roots. Darwin speculated that the roots of plants were the equivalent of the human brain and wrote in his last book, The Power of Movement in Plants, in 1880, “It is not exaggeration to say that the tip of the radicle acts like the … brain of one of the lower animals; …receiving impressions from the sense organs, and directing their several movements.”

In 1973, Peter Tompkins and Christopher Bird’s book, The Secret Life of Plants, became a best seller worldwide, indicating a new awareness and sensitivity towards plants was emerging. 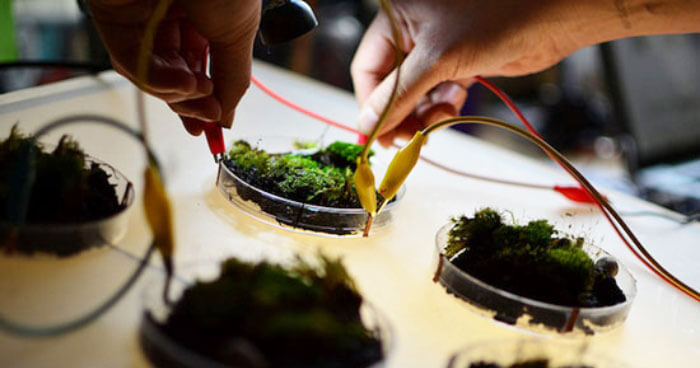 Scientific studies are proving that plants have telepathic capabilities

In the book, they report numerous experiments with plants, including a series carried out by an ex-CIA agent and expert in lie detector technology who hooked up his lie detector to plants and then tried a variety of different scenarios. One particular experiment conducted was to light a burning match near a plant. He discovered that as soon as the match was lit, the plant went into stress, as indicated by the activity of the lie detector device. In fact he noted that the plant went into stress as soon as the scientist had the thought of burning the plant’s leaves.

Other experiments where they connected up multiple plants in different closed rooms, were remarkable, in that when the first plant had a match lit near it, all the other plants in the closed rooms, went into stress. From this scientists theorized that plants are able to perceive thoughts and are able to communicate telepathically with each other. They were even able to pick out from a group of people, the individual who was responsible for destroying another plant.

Plants make up more than 99% of biomass on the planet. Amazingly enough when you consider this, it means that the entire animal kingdom, including us, is the other less than one percent! 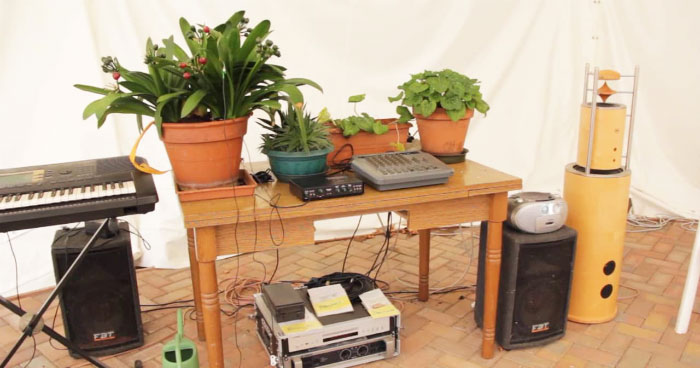 Deepening our connection with plants through science and music

Perhaps in a very small way the Music of the Plants can contribute to a shift in consciousness that leads to greater love for and preservation of nature.

The Music of the Plants is spreading across the globe, with travelling concerts and installations and people are starting to buy the device and work with it. Concerts with musicians and plants have been facilitated across Europe, Asia and America. I am one of the facilitators of the Music of the Plants in Australia, at the Crystal Castle in Byron Bay.

Sono King, co-owner of the Crystal Castle visited Damanhur and had a profound experience where she was moved to tears by witnessing a melody that had been played to a plant being repeated back perfectly to the musician by the plant. Together with her husband, Naren, they decided that this amazing experience of the Music of the Plants had to be something offered at the Crystal Castle:

Contact with the intelligence of the plant world provides deeper insight into ourselves and the world around us. You will never forget the moment you are finally able to hear the invisible sounds of nature.  – Sono and Naren King

The Singing Plants of Damanhur, Italy

Hearing the music of the plants for the first time

It is an amazing and magical experience to hear the plants sing. I love witnessing the joy and wonder on people’s faces when they hear a plant make music for the first time. I’ve had many skeptical people in the audience and after they hear the plants sing, they soften. It’s like a doorway is opened in their mind.

If you truly love nature, you will find beauty everywhere. – Vincent Van Gogh

This is a good example how to misuse scientific knowledge about plants. The so-called algorithm in the machine is rather arbitrary and not explained, and the cheap computer synthesizer makes it worse, like the muzak in the supermarket.
Today it is easy to run away with science and transform it into a ‘populistic’ fake-tool for fun.
Not impressed at all…

I absolutely love this

now, I don’t want to eat them

Wowiee.. ^_^ being a lover of nature always wished for something like that to hear the plants wowieee :* thank u for this article 🙂