Girl Power at the March for Our Lives

Girls are raising their voices in a powerful call: ‘Never again’. Never again will young people be victims of gun violence. Never again will students feel unsafe in their schools, streets and homes. Teens across the United States, and the world, took part in hundreds of March for Our Lives rallies on Saturday. Thousands of voices were raised in a call for action on gun violence, but it was the speeches that really struck a chord.

Some of the most inspiring speakers were young women who are no longer willing to stand by as gun violence causes destruction and claims lives. One little girl held a sign saying, “It’s time to use our outside voices”, and it’s working–the voice of the youth is becoming hard to ignore.

My grandfather had a dream that his four little children will not be judged by the colour of the skin, but the content of their character. I have a dream that enough is enough. And that this should be a gun-free world, period. 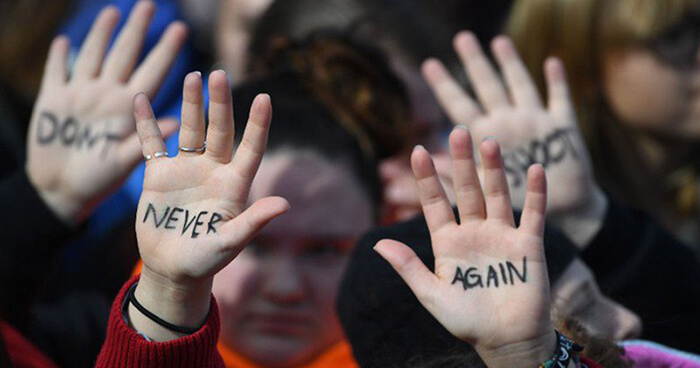 Girls at the March for Our Lives rally demanding gun control after school shootings.

Our Voices are Powerful

This dream is shared by the #NeverAgain generation who are turning their attention towards issues that really matter. When used for positive action, social media can be a powerful tool, but even more impactful is when teens step onto the streets. These are the youth who have seen their friends die in shootings. Lost loved ones to gun violence. Live in fear of going to school.

Now, young people are realizing that they have the power to demand change if they join together as one. Sam Fuentes, a survivor struck by a bullet and shrapnel during the Parkland shooting, made a moving speech that included a poem:

Listen. Our mission is simple and our ambitions are unbeatable. Let’s keep the guns out of the hands of the wrong people, and keep them in the hands of the safe and reasonable. So either you can join us, or be on the side of history who prioritized their guns over the lives of others.

Not only are we listening, our hearts are lifted by the cry of the next generation of leaders for a more peaceful world. Here are three of the most powerful and poignant speeches by young women from the March for Our Lives: 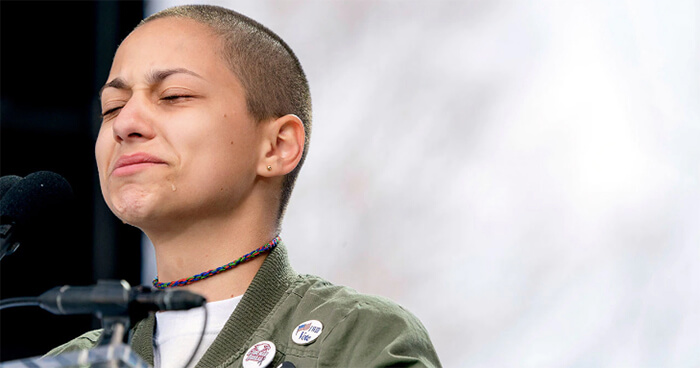 Emma González, a Parkland shooting survivor, cries as she stands silently at the podium.

Emma González, a 17-year-old survivor of the Parkland shooting in Florida, made the strongest statement with her silence. She spoke about her harrowing experience of the shooting and then fell silent. Tears streamed down her face as she held the stage, a few people calling out, “We’re all with you, Emma.” The crowd held its breath as she broke the silence with a sombre reminder of the irreparable damage that can be done in just a matter of minutes.

In a little over six minutes, 17 of our friends were taken from us, 15 more were injured, and everyone–absolutely everyone in the Douglas community–was forever altered.

Since the time that I came out here, it has been six minutes and 20 seconds. The shooter has ceased shooting and will soon abandon his rifle, blend in with the students as they escape, and walk free for an hour before arrest. Fight for your lives before it’s someone else’s job. 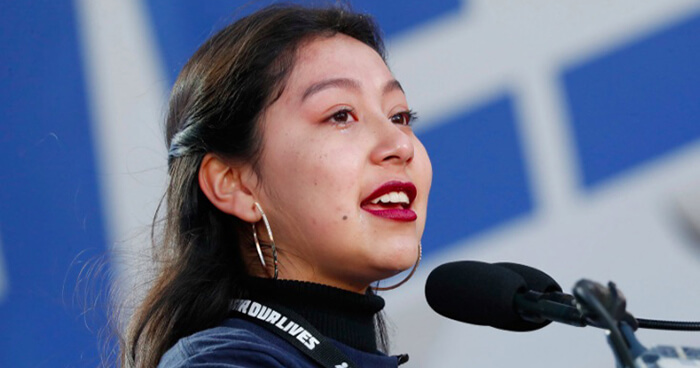 Edna Chavez lost her brother to a shooting and fights against the normalization of gun violence.

Edna Chávez, a 17-year-old gun control activist from south Los Angeles, spoke about normalization of gun violence. She says “learned how to duck from bullets before I learned how to read.” Edna lost her brother, Ricardo, to a shooting outside their home and cried as the whole crowd chanted his name. The trauma and anxiety she and her family carry from that act of violence is the reason she is fighting for change today.

My brother, he was in high school when he passed away. I carry that trauma everywhere I go. I carry it with me in school, in class, walking home, and visiting loved ones. And I am not alone in this experience.

For decades, my community of South Los Angeles has become accustomed to this violence. It is normal to see flowers honoring the lives of black and brown youth that have lost their lives to a bullet. We need to tackle the root causes of the issues we face and come to understanding of how to resolve them. 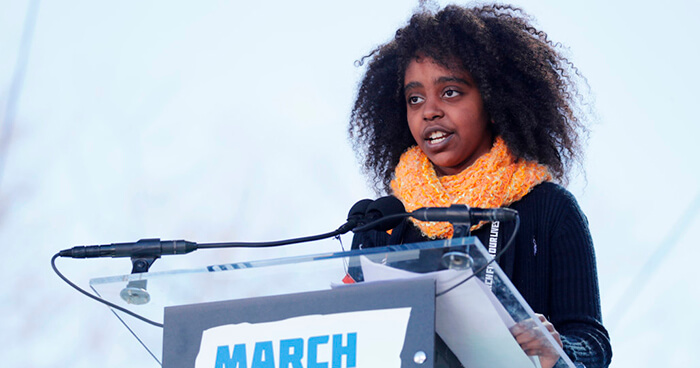 Naomi Wadler stands for the rights of African American women and girls to be heard.

Naomi Wadler, at the tender age of 11, touched hearts and left people in awe as she stood up for African American women and girls. She led a walkout at her elementary school on March 14, as part of the National School Walkout for 17 minutes, to honor the Parkland victims and protest gun laws. Naomi took to the stage to represent the hidden victims of gun violence, not just in schools but at home too, and to encourage all of us to recognise that their lives matter.

I am here to acknowledge their stories, to say they matter, to say their names because I can, and I was asked to be. For far too long these names, these black girls and women have been just numbers. I am here to say #NeverAgain for those girls, too.

Watch these girls’ powerful speeches below:

Emma González at the March for Our Lives

Edna Chavez at the March for Our Lives

Naomi Wadler at the March for Our Lives

Get serious & demonstrate in front of the homes of NRA executives.