Our families are our first experience of love. We expect them to love us no matter what. Yet sometimes they don’t. And when they reject us, it can be devastating. For the LGBTQ+ community, being isolated from family is more the norm than not. Many are experiencing the deep pain, hopelessness, and isolation due to being rejected by their families when they came out.

But, there is hope. While some parents unfortunately feel ashamed of their children for being LGBTQ+, there are an inspiring group of parents who love their LGBTQ+ children unconditionally and are now spreading this love and acceptance to others in the community. Free Mom Hugs is made up of moms and dads whose hearts are full of love to share with those who may feel alienated from their families or marginalised due to their sexual orientation.

Sara Cunningham, founder of Free Mom Hugs and the author of How We Sleep at Night, started the group in Oklahoma in 2015. Today the group has thousands of followers and huggers across the nation. They attend events offering hugs, support, and resources to the LGBTQ+ community.

I’m a Christian mom with a gay kid living in Oklahoma saying enough is enough. If I don’t fight for my son (and his rights) like my hair is on fire, then who will? It’s time we celebrate our LGBTQ+ children. And I won’t stop until I no longer hear horror stories from the LGBTQ+ community and their mothers. 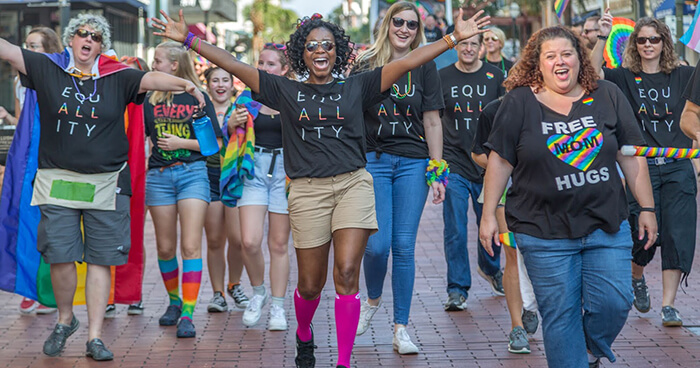 In the beginning, Sara was going to Pride Parades and other local events where she’d hand out ‘free mom hugs’ to LGBTQ+ people who needed to know they were loved and accepted. Then, in a moment of inspiration, she decided to make a bigger impact and so in 2017, with her LGBTQ+ son Parker, she embarked on a tour of 10 cities. They gave over 10,000 hugs and spent time just listening to other LGBTQ+ people from all around the country.

The first national tour of Free Mom Hugs ended at the Stonewall Inn, the gay bar and historic landmark in New York City, where the first LGBTQ+ activists started a movement in 1969 in a spontaneous uprising against a police raid. Free Mom Hugs was officially the first organisation ever to be awarded a permit to exercise their First Amendment Rights at Stonewall, where most believe the gay civil rights movement began.

In a world where being different and not fitting in can have devastating consequences, Free Mom Hugs is providing a ray of hope and possibly the first experience of love and acceptance from a parental figure, for many LGBTQ+ people.

We all need to feel valued and cherished. Being loved and accepted for who we are and belonging to a community or family is a basic human need. Research has shown countless times how a lack of love or connection is so vital to our survival that it can be a cause of death if not fulfilled. Our families are the cushioning, the love that we can return to in times of challenge. And when they withdraw their love it hurts. Deeply.

The rate of homelessness and suicide in the LGBTQ+ community is nearly 10 times the rate of the general population. And an estimated quarter of all LGBTQ+ youth who come out in religious circles are immediately turned away by their families. Free Mom Hugs is dedicated to educating families, church and civil leaders, and affirming the value of the LGBTQ+ community. The group aims to eliminate LGBTQ+ prejudice, and end the abusive practice of conversion therapy. 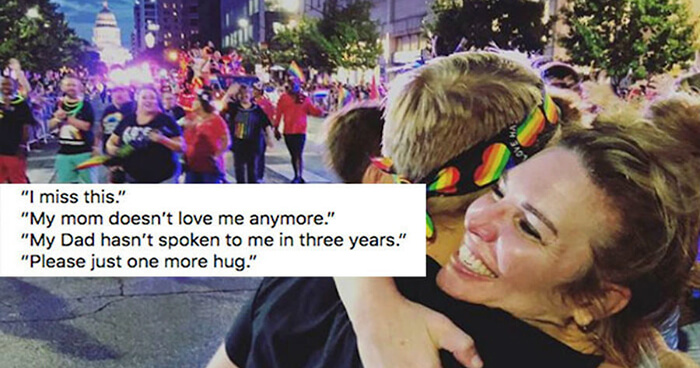 You are Not Alone

Sara Cunningham says every time she goes out with the Free Mom Hugs banner, she meets youth and young adults who desperately need the reassurance that they are not alone and there truly are people who love and support them. Many times she will experience the tears of young people who haven’t spoken to their moms and families in years.

I also meet parents who need to be encouraged on their path of loving and accepting their LGBTQ+ kids. That’s the message we will carry along with our banner.

Every day they hear moving messages of hope and reconnection like this one:

If you told me 10 years ago that my mom would invite me over to help her make a sign to carry at the LGBT Pride Parade, I never would have believed you. But that is exactly what happened today. Thankful for healing in this relationship and so thankful for a mom who yearns to understand and support her daughter. Love Always Wins!

Sara has now extended her loving mom role and also attends same-sex weddings as a stand-in mom when the bride or groom’s own mom refuses to attend. It all started from this Facebook post which quickly went viral: “If you need a mom to attend your same-sex wedding because your biological mom won’t. Call me. I’m there. I’ll be your biggest fan. I’ll even bring the bubbles!”  She received an avalanche of requests and has since presided over numerous weddings. 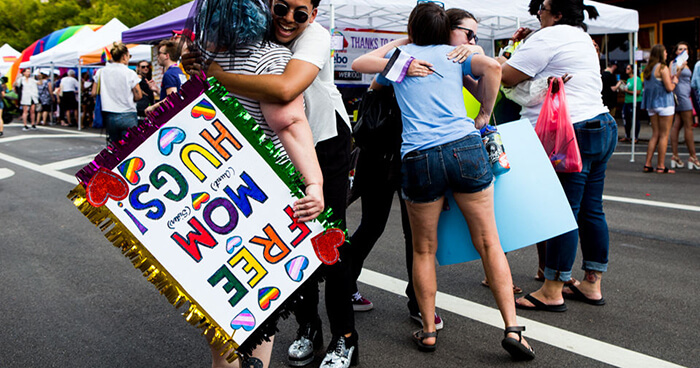 The power of love is the greatest power we have.

The Power of Love

For her, it was her own son coming out of the closet that set her on the path she is today. But initially, she found it tough to accept the truth. In an interview with Indian Woman Blog she shares her experience:

I was… well, I was upset, and yes, afraid for a long time. You see, I grew up learning about faith, how being homosexual is a sin in God’s eyes. I was worried about my son’s salvation, scared that his soul was beyond saving and he was not deserving of God’s grace as he was condemned. I felt like I had to choose between my child and my faith.

Fortunately for her son and the thousands of LGBTQ+ young people whose lives she’s touched, she not only found a way to acceptance, but also a pathway that opened her heart to a greater purpose.

I went to the church, seeking the solution there. I turned to private Facebook groups for moms going through the same thing. Eventually, I figured it all out, although it wasn’t something that happened overnight. I learned that God loves everyone, regardless of their gender. There is no rule that one can’t be gay and practice their faith at the same time.

The power of love is the greatest power we have, and Sara’s son underwent an incredible transformation after she accepted him for being gay. Now she’s transforming the lives of other young people through holding them close, showing them how valuable they are and giving them the respect they deserve.

To join or find out more about Free Mom Hugs check out their website here.

Sara, I saw you on RuPaul and you touched me deeply,
As a Christian woman and mom and one who has many gay friends because I was in the Arts for years, what you said on the show was magnificent!
I have been in conversation for the last two years on how we can reach out in nonjudgmental love to our gay loved ones and friends with my pastor.
If churches would preach the way you did on RuPaul,I believe it would do wonders.
I will be praying for you.

In my culture, it is unacceptable culture. Anyways, life styles do differ. I am straight and enjoy my nation’s emphasis to avoid too much copying the western culture.

I joined our local Free Mom Hugs group as soon as I found out we had one. The group started with 7 moms last year at the Pride Festival, and this year we had 60!

In my work on the National Suicide Prevention Hotline, I comforted too many young people whose families ostracized them and had no one to turn to,; so they wanted to die. This program is desperately needed especially for our young people, as they are already confused, frightened, and in need of love during puberty without absolute dismissal by family and others. I will join this organization, as human contact is one of the best ways to combat these feelings.