My vision of the world? My hope for the future? This topic sounds a bit big. Allow me to start small—say, with crows. They are my special friends. Just as I am writing these lines, one of them, the shy one among my three regular guests, is gobbling up the Kitty Fritters I put out for them. This brings to mind a short poem by Robert Frost that might provide a stepping-stone for our deliberations about world-vision and hope for the future—if any.

The way a crow
Shook down on me
The dust of snow
From a hemlock tree
Has given my heart
A change of mood
And saved some part
Of a day I had rued. 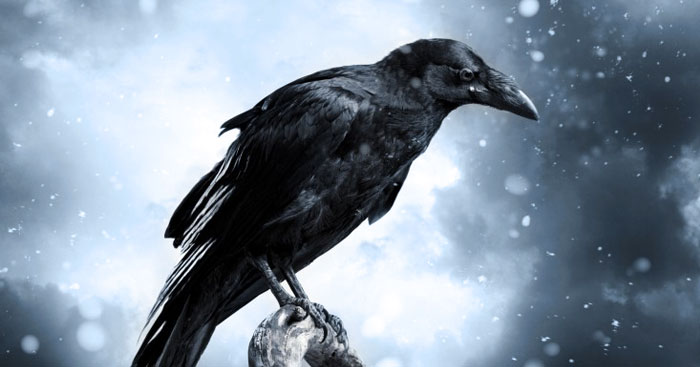 My hope for the future? Allow me to start small – with crows.

Surely you will remember a similar experience of your own: some quirky little incident made you smile, changed your mood, and suddenly the world looked brighter. If this ever happened to you, the key for understanding a causal chain of great consequence is in your hand: any change in attitude changes the way one sees the world, and this in turn changes the way one acts. When Robert Frost claims that the crow’s little trick “saved” part of a day he had rued, or of which he repented, he means this in the full sense of a redeeming change of heart. When he got home, I’m sure he greeted Mrs. Frost in a better mood than he would have been able to do without the crow’s nudge. And there is no telling what this did to her—and to the way she treated the dog afterwards, or talked more kindly to her neighbour.

But what exactly triggered this fortunate chain reaction? What gave Frost’s heart “a change of mood”? Put yourself in his shoes as he is slouching moodily through the woods. Then feel that sudden dusting with snow. Doesn’t it wake you up from your brooding? An interruption like this could make you angry if you insisted on staying preoccupied with your problems.

But—surprise—the cold spray makes you snap out of being wrapped in yourself, and you face the given: a hemlock tree, a crow, melting snow on your neck. Bingo! A saving change of mood. What caused this change was gratefulness.

What caused this change of mood was gratefulness.

Gratefulness can Change the World

Gratefulness? I hear a chorus of disbelief. Admittedly, Frost didn’t feel like thanking the crow. But gratefulness is more than giving thanks. Thanking comes with thinking. Gratefulness happens before thinking—in that brief gap between “the dust of snow” and thought. It is the spontaneous response of the human heart to the gratuitously given. This gratefulness releases energy. In the gap of surprise before the first thought, the powerful surge of an intelligence that far surpasses thought takes hold of us. We can make our thinking a tool of this creative intelligence that constantly brings forth and sustains the world. If we willingly open ourselves to its gentle force, it has power to change whatever is not in tune with it. Gratitude is thinking in tune with the cosmic intelligence that inspires us in grateful moments. It can change more than a mood; it can change a world.

Imagine a country whose citizens—maybe even its leaders—are brave, calm, and open towards each other; a country whose people realize that all human beings belong together as one family and must act accordingly; a country guided by common sense.

This may seem more than doubtful when we look around us and see what we have made of the world: “Things fall apart,” says the poet W. B. Yeats succinctly. A “blood-dimmed tide is loosed” upon the world, and in the face of this tide of violence “the best lack all conviction, while the worst are full of passionate intensity.” Gratitude? The very word seems utterly out of place, even offensive, under the given circumstances. And yet, we speak of “given” circumstances. This is significant. Whatever is given is a gift; and the appropriate response to any gift is gratitude. 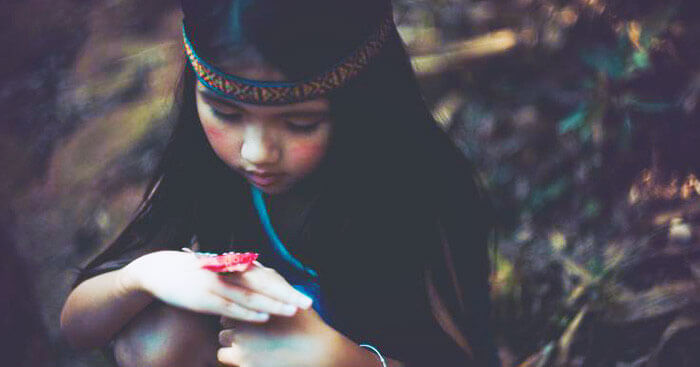 Gratitude is thinking in tune with the cosmic intelligence.

But what could be the gift in this given moment of history? The gift hidden in our unprecedented world crisis is an equally unprecedented opportunity. The gift within every gift is opportunity. For us, these days, it is the opportunity to wake up—wake up to the madness of violence and counter-violence. For far too long we were able to ignore the vicious circle of violence against violence—international or domestic, our own or that of others. Let us face it: the supreme danger is violence—regardless who commits it, terrorists or legitimate governments. No rhetoric, no posturing can any longer obscure the fact that violence breeds violence. We must break that cycle of madness.

Violence has roots in every heart. It is within my own heart that I must recognize fear, agitation, coldness, alienation, blind anger and the impulse for retaliation. Here in my heart, I can turn fear into courageous trust, agitation into stillness, confusion into clarity, isolation into a sense of belonging, alienation into love, and irrational reaction into common sense. The creative intelligence of gratefulness will suggest to each one of us how to go about this task. As examples I will list here five small gestures of gratitude that I have personally tested. They create a ripple effect to counteract violence. 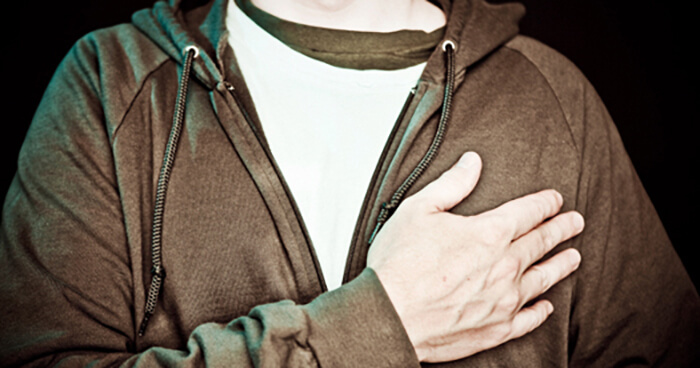 Violence has roots in every heart.

1. Say one word today that will give a fearful person courage.

All gratitude expresses trust. Suspicion will not even recognize a gift as a gift: who can prove that it isn’t a lure, a bribe, a trap? Gratefulness has the courage to trust and so overcomes fear. The very air has been electrified by fearfulness these days, a fearfulness fostered and manipulated by politicians and the media. There lies our greatest danger: fear perpetuates violence. Mobilize the courage of your heart. Say one word today that will give a fearful person courage.

2. Make a firm resolution never to repeat stories and rumors that spread fear.

Because gratitude expresses courage, it spreads calm. Calm of this kind is quite compatible with deep emotions. In fact, mass hysteria fostered by the media betrays a morbid curiosity rather than deep feeling—superficial agitation rather than a deep current of compassion. The truly compassionate ones are calm and strong. Make a firm resolution never to repeat stories and rumors that spread fear. From the stillness of your heart’s core reach out. Be calm and spread calm. 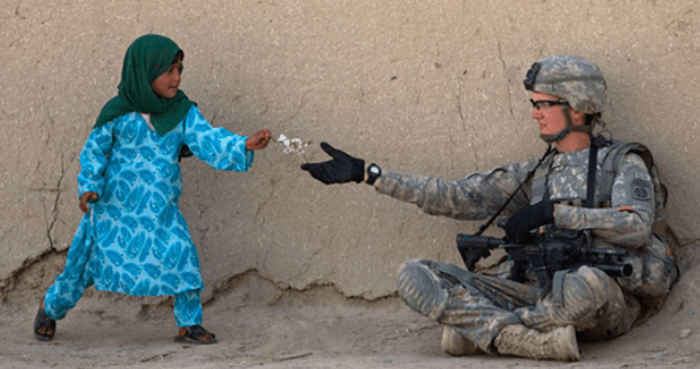 When you are grateful, your heart is open—open towards others, open for surprise. When disasters hit, we often see remarkable examples of this openness: strangers helping strangers, sometimes in heroic ways. Others turn away, isolate themselves, dare even less than at other times to look at each other. Violence begins with isolation. Break this pattern. Make contact with people whom you normally ignore—eye-contact at least—with the cashier at the supermarket, someone on the elevator, a beggar. Look a stranger in the eyes today and realize that there are no strangers.

4. Give someone an unexpected smile today

You can feel either grateful or alienated, but never both at the same time. Gratefulness drives out alienation; there is not room for both in the same heart. When you are grateful, you know that you belong to a network of give-and-take, and you say “yes” to that belonging. This “yes” is the essence of love. You need no words to express it; a smile will do to put your “yes” into action. Don’t let it matter to you whether or not the other one smiles back. Give someone an unexpected smile today and so contribute your share to peace on earth. 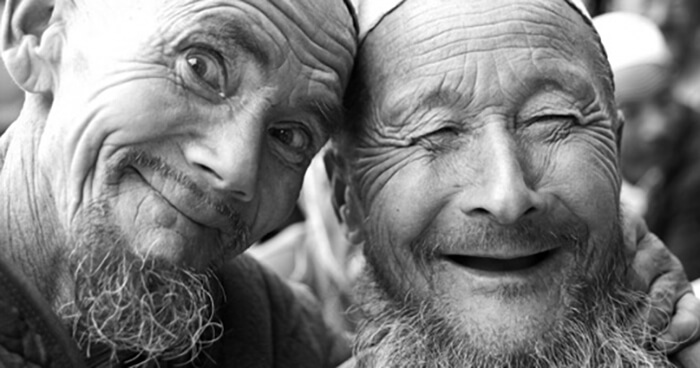 Look a stranger in the eyes today and realize that there are no strangers.

5. Listen to the news today and put at least one item to the test of Common Sense.

The common sense that springs from gratefulness is incompatible with a set mind. It is just another name for thinking wedded to cosmic intelligence. Your “yes” to belonging attunes you to the common concerns shared by all human beings—all beings for that matter. In a world we hold in common, nothing else makes sense but common sense. We have only one enemy: Our common enemy is violence. Common sense tells us: we can stop violence only by stopping to act violently; war is no way to peace. Listen to the news today and put at least one item to the test of Common Sense.

The five steps I am suggesting here are small, but they work. It helps that they are small: anyone can take them. Imagine a country whose citizens—maybe even its leaders—are brave, calm, and open towards each other; a country whose people realize that all human beings belong together as one family and must act accordingly; a country guided by common sense. To the extent to which we show ourselves not hateful but grateful this becomes reality.

Who would have thought that a prankish crow shaking down snow from a hemlock tree could inspire this vision of a sane world? Well, if we leave it to the crows, there is still hope.

A most wonderful reflection. Gratitude enables us to see goodness in most any situation. When gratitude isn’t appropriate, we can turn to forgiveness and it will transform the situation and our plight.

Thank you Brother David for this piece and these 5 very simple steps.