Embracing our vulnerabilities is risky but not nearly as dangerous as giving up on love and belonging and joy—the experiences that make us the most vulnerable. Only when we are brave enough to explore the darkness will we discover the infinite power of our light. – Brené Brown

I’ve often heard it said that people fear public speaking almost as much as they fear death. Comedian Jerry Seinfeld said, “According to most studies, people’s number one fear is public speaking. Number two is death. Does that sound right? This means to the average person, if you go to a funeral, you’re better off in the casket than doing the eulogy.” Why would the prospect of speaking in front of others be so terrifying and confronting?

In an article I recently read about the fear of public speaking, the author Preston Ni remarks, if you think about it, this fear of public speaking is also a fear of death – an emotional death. We feel exposed in front of an audience whom we think will scrutinize everything we say and do. We pressure ourselves to be perfect, or else our self-worth suffers. We dread confronting the possibility of rejection.

It seems that public speaking triggers many fears. According to Dr Karl Albrecht, we all share the same five basic fears, out of which almost all of our other so-called fears are manufactured. These five fears are:
• The fear of death or extinction; the fear of having our body’s boundaries invaded or grievous bodily harm;
• the fear of our loss of autonomy – being controlled by circumstances beyond our control;
• the fear of separation – abandonment, rejection, and loss of connectedness;
• and ego-death – the fear of humiliation, shame, disintegration of one’s constructed sense of lovability, capability, and worthiness. 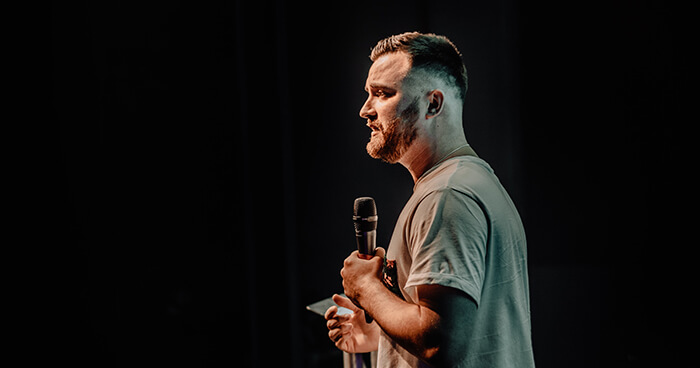 The Ego death that we fear is also a fear of vulnerability. Author Brene Brown’s research on shame and vulnerability, defines vulnerability as uncertainty, risk and emotional exposure. There is vulnerability in sharing our ideas with others. We have no guarantee that our sharing will be received with appreciation rather than ridicule. For many, this has happened in the past, and they’ve built defences against pain and shame. Furthermore, the very act of asking for, or offering love and affection, can trigger the fear of abandonment, rejection and loss of connectedness.

Yet trying to protect ourselves from unpleasant feelings in the name of self-preservation can hold us back from truly connecting with others. Being vulnerable is often seen as a weakness. Brene Brown believes that it takes true courage to be open and honest about our feelings. It allows for connection with others, whereas constantly trying to be perfect and hiding behind a seemingly strong and capable facade, can push people away.

When powerful leaders have allowed themselves to open up and let themselves be vulnerable, it has allowed the public to see them as real human beings. In 2012 President Obama shed tears when he expressed his overwhelming grief of the Newtown school shooting. Allowing our selves to be truly seen and understood by others is a powerful source of connection, creativity, empathy, and transformation.

Brown believes that we use three shields to protect ourselves from vulnerability:

However, we don’t have to spill our hearts to strangers or “let it all hang out” all of the time to be vulnerable. Vulnerability embraces boundaries and trust, she says. “Vulnerability is about sharing our feelings and our experiences with people who have earned the right to hear them.”

Vulnerability is contagious. When you rest in the vastness of your utmost truth, others start to settle into theirs. Have you ever noticed how you suddenly attract very different people when you are being real versus being fake? We start to break a long-held pattern of “keeping it all together” to slightly falling apart. And in that brokenness, we create a new space for people to join us in our uphill battles and sorrow. We are not left behind. Quite the contrary! In embracing our own humanity, we invite others to do the same. – Christine Louise Hohlbaum

Best article on Fear yet. How would you put/place labeling in this topic-fear?

Many mentaally ill are grouped in wrong way as defective. Take of LOVE OVERWHELMING in connection with homelessness. GOD made us this way? Can national mind set of im-perfect be modified and how?

Excellent stuff!
So many lessons here.

0
Reply
PrevPreviousLetting Go of Attachment: From A to Zen
NextThe Science of how Sex reduces StressNext