BY Daniel Christian Wahl
Welcome to UPLIFT
Stories of Love
Evolution Shows Collaboration, not Competition, Helped us Evolve
The Importance of Moving from 'Me' to 'We'

A holistic understanding of modern evolutionary biology suggests that life evolves by a process of diversification, and subsequent integration of diversity, through collaboration (John Stewart in BioSystems, 2014). As our focus shifts from individuals and individual species as the unit of survival, to the collective of life—its complex dynamic interactions and relationships—we begin to see that collaborative and symbiotic patterns and interactions are of more fundamental importance than competition, as a driving force of evolution. Life’s key strategy to create conditions conducive to life is to optimize the system as a whole, rather than maximize only some parameters of the system for a few, at the detriment of many (Wahl, 2016).

The patterns of evolution show a general trend of diversification and subsequent or parallel integration at a higher level of systemic complexity. This integration tends to happen predominantly through the creation of more complex organismic or social entities, primarily by collaboration and symbiosis. John Stewart suggests that this is moving us towards a ‘global entity’ (2014). Maybe this entity already exists in the life-sustaining processes of the biosphere? 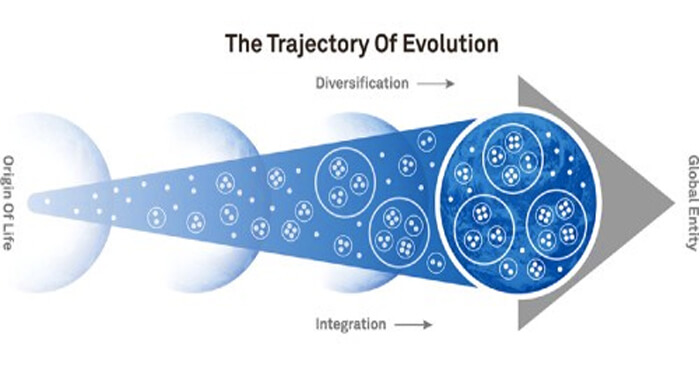 The trajectory of Evolution.

The biologist, Peter Corning, former president of the International Society for Systems Science and director of the Institute for the Study of Complex Systems, suggests that “one aspect of this more complex view of evolution is that both competition and cooperation may coexist at different levels of organization, or in different aspects related to the survival enterprise. There may be a delicately balanced interplay between these supposedly polar relationships” (Corning, 2005; p.38). He emphasizes that collaboration has been a key factor in the evolution of our own species. The socio-economic payoffs of collaboration, in response to ecological pressures and opportunities among early humans, have shaped the evolution of languages and cultures; both require and enable complex patterns of collaboration.

If a society is viewed merely as an aggregate of individuals who have no common interests, and no stake in the social order, then why should they care? But if society is viewed […] as an interdependent collective survival enterprise, then each of us has a vital, life-and-death stake in its viability and effective functioning, whether we recognize it or not. — Peter Corning, 2005, p.392

If we want to re-design economics, based on what we know about life’s strategy to create conditions conducive to life, we need to question some basic assumptions upon which the narrative underlying our current economic systems is built. The narrative of separation has predisposed us to focus on scarcity, competition, and the short-term maximization of individual benefit as the basis on which to create an economic system. Life’s evolutionary story shows that systemic abundance can be unlocked through collaboratively structured symbiotic networks that optimize the whole system, so human communities and the rest of life can thrive. 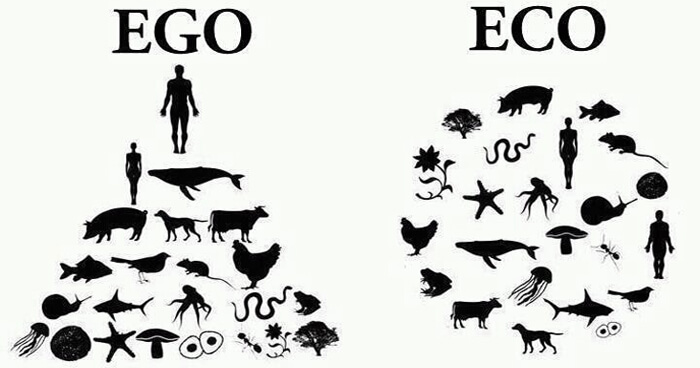 We have the potential to be a regenerative presence in ecosystems and the biosphere.

Our re-design of economic systems has to incentivise both collaborative and competitive processes, if and when appropriate. Both collaboration and competition contribute to how life creates conditions conducive to life. The biologist, Andreas Weber, explains: “The biosphere is not cooperative in a simple, straight-forward way, but paradoxically cooperative. Symbiotic relationships emerge out of antagonistic, incompatible processes” (Weber, 2013: 32). Weber stresses that we have to understand how the works of the economist, Adam Smith, and the political economist, Robert Malthus, influenced Charles Darwin in his attempt to construct a theory of evolution.

[Darwinian] evolutionary biology is a more accurate reflection of pre-Victorian social practices than of natural reality. In the wake of this metaphorical takeover, such concepts as ‘struggle for existence’, ‘competition’, and ‘fitness’—which were central justifications of the political status quo in (pre) Victorian England—tacitly became centrepieces of our own self-understanding as embodied and social beings. And they still are…. Biological, technological, and social progress, so the argument goes, is brought forth by the sum of individual egos striving to out-compete each other. In perennial rivalry, fit species (powerful corporations) exploit niches (markets) and multiply their survival rate (profit margins), whereas weaker (less efficient) ones go extinct (bankrupt). This metaphysics of economics and nature, however, is far more revealing about our society’s opinion about itself than it is an objective account of the biological world. — Andreas Weber (2013: 24) 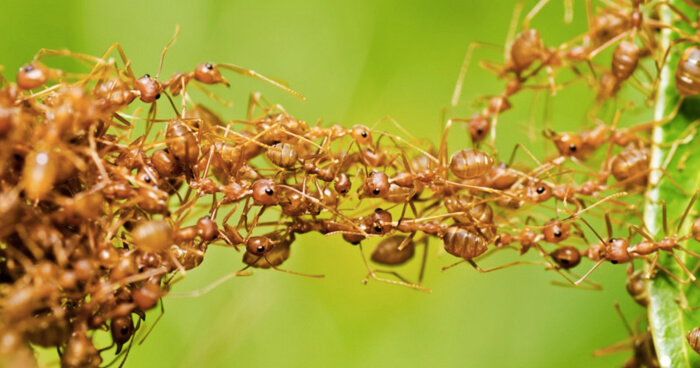 An example of collaboration in Leaf-Cutter Ants.

The limited narrative of separation, with its exclusively competition and scarcity-focused understanding of life, is supported by outdated biological and economic theories. Weber calls this an “economic ideology of nature” and suggests that:

[an ideologically biased perspective] reigns supreme over our understanding of human culture and world. It defines our embodied dimension (Homo sapiens as a gene-governed survival machine) as well as our social identity (Homo economicus as an egoistic maximizer of utility). The idea of universal competition unifies the two realms, the natural and the socio-economic. It validates the notion of rivalry and predatory self-interest as inexorable facts of life (pp.25–26).

A ‘Systems View of Life’

The optimization of resource-sharing and processing in order to (re)generate and share abundance and systemic health, rather than competition for scarce resources, is the basis of life’s way of doing economics! In attempting to create a life-friendly economy, we need to understand the profound implications that the emerging ‘systems view of life’ has for our undertaking.

As the twenty-first century unfolds, a new scientific conception is emerging. It is a unified view that integrates, for the first time, life’s biological, cognitive, social, and economic dimensions. At the forefront of contemporary science, the universe is no longer seen as a machine composed of elementary building blocks. We have discovered that the material world, ultimately, is a network of inseparable patterns of relationships; that the planet as a whole is a living, self-regulating system. […] Evolution is no longer seen as a competitive struggle for existence, but rather a cooperative dance in which creativity and constant emergence of novelty are the driving forces. And with the new emphasis on complexity, networks, and patterns of organization, a new science of qualities is slowly emerging. – Fritjof Capra and Pier Luigi Luisi (2014b)

Integrating Economy and Ecology with Wisdom

The evolutionary biologist and futurist, Elisabet Sahtouris, describes how in the evolution of complex communities of diverse organisms a ‘maturation point’ is reached when the system realizes that “it is cheaper to feed your ‘enemies’ than to kill them” (personal comment). Having successfully populated six continents and diversified into the mosaic of value systems, worldviews, identities (national, cultural, ethnic, professional, political, etc.) and ways of living that make up humanity, we are now challenged to integrate this precious diversity into a globally and locally collaborative civilization, acting wisely to create conditions conducive to life.

We have now reached a new tipping point where enmities are more expensive in all respects than friendly collaboration; where planetary limits of exploiting nature have been reached. It is high time for us to cross this new tipping point into our global communal maturity—an integration of the economy and ecology we have put into conflict with each other, to evolve an ecosophy. – Elisabet Sathouris (2014)

The challenge of a fundamental re-design of how we do business, of our patterns of production and consumption, of the types of resources and energy we use, goes hand in hand with the structural redesign of our economic systems. We have to challenge economic orthodoxies and basic assumptions, and find ways to integrate multiple perspectives if we hope to redesign economies at multiple scales and learn how to manage our household with wisdom (oikos + sophia).

If we Homo sapiens want to continue our fascinating, yet so far relatively short, evolutionary success story, we have to evolve wise societies characterized by empathy, solidarity and collaboration. Wise cultures are regenerative and protect bio-cultural diversity as a source of wealth and resilience (Wahl, 2016). 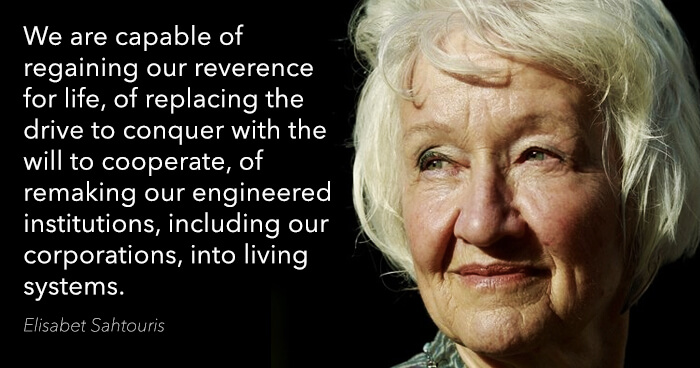 By revisiting basic assumptions about economics, we can begin to integrate ecology and economy in full reconnection of the inter-being of nature and culture. We need wisdom to re-design an economic system fit for life. Here are some insights that can help us: