Environmental activist and Buddhist scholar Joanna Macy is an inspirational figure for many in the ecological movement. As part of the Deep Ecology tradition and throughout her Despair and Empowerment work, Joanna has voiced her vision of The Great Turning; which is the shift from the industrial growth society to a life-sustaining civilisation. Admitting that even though she talks ‘so convincingly’ about knowing the great turning is happening, at the same time she knows that we’re not sure how the story will end.

I want so much to feel sure. I want to be able to tell people ‘don’t worry – it’s going to be ok’. And you know what? I realise that that wouldn’t be doing anyone a favour. – Joanna Macy

Dwelling in The Dark

Novelist Anna Luke has also come to appreciate the importance of radical uncertainty. During her presentation at Breaking Convention in London, Anna shared her perspective on what makes it so difficult to say those three simple words ‘I don’t know’.

Darkness and uncertainty have been deeply undervalued by our patriarchal culture, which favours that which can be measured and seen. – Anna Luke

Being in the dark is generally seen as something to be avoided at all costs, especially in a professional context. Anna has identified that ‘instead of admitting we don’t know – we hedge, we bluff, we retreat behind our defenses, we split. Or we feign certainty; we shout louder in the hope that nobody’s going to see the fear behind our eyes. Why all this need for certainty? This attitude towards uncertainty has significant cultural implications, and it seems that being able to “tolerate uncertainty might be an increasingly urgent social and environmental need.”

After an extended time working with plant medicines in Peru (and working through her childhood fear of the dark) Anna likens the experience of facing the unknown to that of a psychedelic experience:

It is a liminal zone, where the calcified ego, the logic of identity breaks down; and we can find something new in an intermediary space, where the straight lines of linear time are replaced by something much more interesting. – Anna Luke 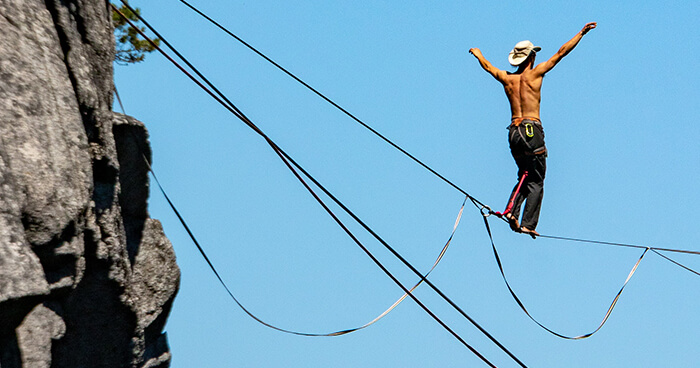 Finding Something New in the Unknown

I myself am familiar with feeling on the brink of the unknown. Just as I feel myself letting go of my sense of certainty I turn to face the vast and humbling magnitude of my own ignorance.

In a recent fireside conversation with Michael Maso Ellis, a writer and therapeutic arts practitioner, he described the moment when the grip of certainty loosens its hold. “That’s the point of fear, the point of crisis that the mind comes to where it’s like “I hope somebody knows!”… So we delegate authority to the experts out of this need for security.” Rather than continually giving away this power to an external force, Michael encourages individuals to cultivate their own relationship with the mystery through creative and contemplative practices.

I asked him what kinds of practices might be useful for developing a deeper relationship with the unknown. First and foremost a well-developed meditation practice, using a technique such as Vipassana is considerably beneficial. Meditation techniques that involve witnessing one’s thoughts, feelings and sensations without judgement assist us in dropping past the ‘story’ the mind keeps up about what is happening in any given moment.

Other ways of embracing rather than fighting the unknown include creative improvisation practices such as dancing, free-styling, jamming, dynamic life drawing and stream of consciousness writing. Engaging in this process in a safely held space is another important aspect of an ‘art as medicine’ practice.

Living on The Edge

Perhaps our ability to tolerate uncertainty comes from being able to meet each opportunity of venturing into uncertainty as a mysterious source of creative fire and inspiration; as Joanna Macy described it ‘that knife-edge of uncertainty where we come alive to our truest power.’

Even in our reluctance to venture beyond what is familiar and known it is worth wondering, what is there that is ever truly certain?

Would like to offer some clearings here, to help address the fear of uncertainty. Please see https://serenereflection.wordpress.com/2014/10/31/9-clearings-for-fear-of-uncertainty/