Can Plants Talk to Us?

BY Jacob Devaney
Welcome to UPLIFT
Can Plants Talk to Us?
Understanding our potential to communicate with nature

Since the beginning of time, humans have held a deep reverence for the wisdom of plants, it is only recently that this has been forgotten. This isn’t about receiving a phone call from a tree, it’s about understanding that language and communication can also come in non-verbal ways if we are able to tune in and listen.

We know what a dog is trying to communicate when it barks, what a baby is saying when it cries, and we know what a skunk is trying to say when it turns around and lifts it’s tail! We know that communication happens across species, but what if plants could speak to us directly through our consciousness when we ingest them?

Plants can affect our Consciousness

For millennia we have co-evolved with plants by helping breed or pollinate them, while they feed us and provide medicine. The notion of plants communicating with us is well accepted by indigenous cultures who still live close to the land. It should be no surprise that many people living in concrete jungles, eating processed or frozen and packaged foods with little exposure to natural environments might feel otherwise. 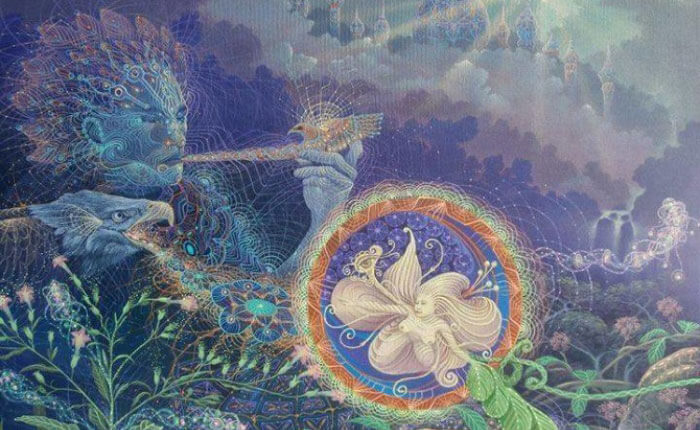 The Artwork of Luis Tamani

Obviously certain plants have properties that effect our consciousness, while some effect our bodies. For example, a neural synapse is a junction between two nerve cells where an electro-chemical process occurs.  These synapses allow our body to communicate to itself through our nervous system, and they can also be directly effected through ingesting certain plants. Anything that informs our bodies or consciousness could be considered a type of communication. The body “talks” without words so it shouldn’t be too far fetched to consider this idea regarding plants. A great example of this kind of plant-human communication can be found in the realm of Visionary Art.

Art also effects our consciousness, and there are artists who claim to be profoundly influenced by plant medicines. Is it possible that artists can be mediums through which visual transmissions of non-verbal information are conveyed from the plant kingdom? The fact is that humans have used art in all forms to convey ideas that transcend words since before written language existed. In this context many artists play a somewhat shamanic role in modern society.

In this way, plants influence artists who then influence the rest of us. Luis Tamani is a wonderful example. He grew up in the Amazon Rainforest and was greatly influenced by the rivers, waterfalls, lush vegetation, and colorful animals that surrounded him. Another artist known for illustrating his visions from plant medicine is Pablo Amaringo who is known for his popular book, Ayahuasca Visions: The Religious Iconography of a Peruvian Shaman. We are happy to have both of their work adorn this article. 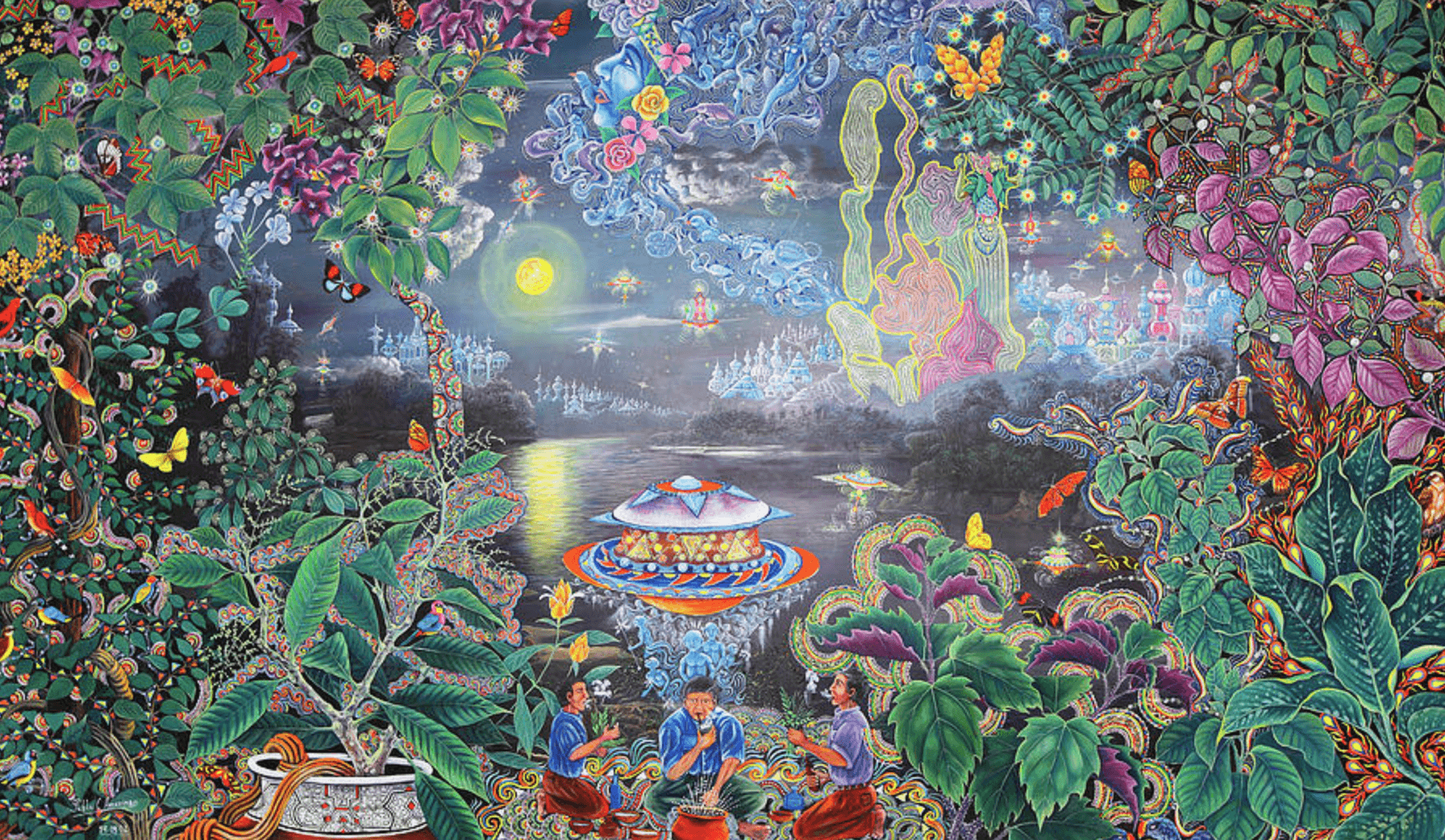 After experiencing sacred medicine plants, Luis began painting the ceremonial visions he experienced, resulting in paintings in a magical style. Today, his art represents and speaks to the fusion of human beings and the vegetal and animal kingdoms. He is continually astonished by the deep relationship that human beings can develop with plants and animals; what makes men and women unique beings; and how we can be Medicine Men and Women. – Plant Teachers

What are the Plants trying to tell us?

Perhaps, for those of us who have become disconnected from the natural world by living in cities and spending our days on the computer, art is the most potent way to reconnect us to something much greater than ourselves. Maybe the plants are screaming at us to stop clear-cutting rain forests and artists have the ability to amplify this message? Maybe even Dr. Seuss was channeling the plants when he wrote the Lorax? The beautiful thing about art, and developing a relationship with nature is that each of us get our own messages directly from within as a result of giving ourselves time to connect.

There is a current trend of wealthy and successful western business-people who are disenchanted with materialism traveling to the Amazon for a ceremonial experience with the plant medicine, Ayahuasca. There is also research that indicates therapeutic benefits in addressing trauma and addiction with various hallucinogenic mushrooms or plants like Iboga. 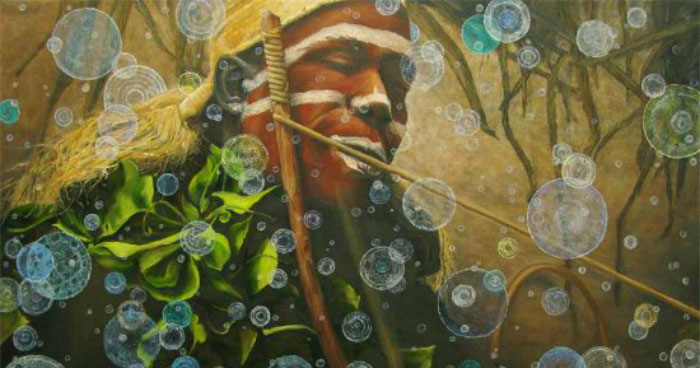 An African medicine man working with the sacred Iboga plant

It is no accident that herbal and natural remedies are being increasingly sought as people are exploring alternatives in order to live a more healthy lifestyle. In addition, plant-based plastics and fuel are being considered as ways to address current environmental issues.

“I went to the top Crohn’s clinics in the world and saw the top doctors in the world, and none of them could help me,” Pischea said. “There is a curative quality to the plants in the jungle that you really need to be there in that environment to experience. I think it really does work.” – Scientists Put Shamanic Medicine Under The Microscope, Carolyn Gregoire, Huffington Post

So can plants talk to us?

I believe that plants can talk to us. Actually I think that all of nature is talking to us if we are willing to notice. Whether it is a plant like tulsi that calms our nervous system when we drink it in tea, or spiralina super-food in a smoothie that energizes our cells, our relationship with plants and the natural world is ancient as well as essential to our survival. It might not need to be a trip to the Amazon to try Ayahuasca with a shaman to awaken this connection to the greater biological web, it could be as simple as spending some time with inspired art, a walk in the woods, or eating live plant foods!

World is largest dramatically stage….I’m a part of this dramatic series….

hello I am inquisitive

When God created humans, they were to rule over all creation and they communicate with each other. plants and nature is connected to man. They can hear us. If you want to know more about this you can e-mail me through [email protected]

I have learnt to talk to them on a daily basis it is fun, incredibly rewarding and inspirational. Underlying message: yes, we are all one and in this transformation process together. I believe we will/can all get back to talking to sentient life forms. I hope so, it is the answer to our problems in so many ways. The plants tell me that through conscious breathing patterns and a will to connect their effects can increase thousandfold. I paint their energies and messages – I believe we all can!
https://sentientgarden.com/natural-remedies/

I had a strange experience with a Schefflera house plant. It was winter, and the Schefflera was root bound in a clay pot. I felt sorry for the plant and decided to repot it. I grabbed the clay pot, tipped the plant on it’s side, and I tried to gently remove the plant. Just then, I felt intense fear, and something like a mental shout to “Stop! Go away!” I did repot it–quickly. No, I don’t hear voices, and I have never had anything like that happen to me since. It would never have occurred to me that the plant was in distress. I believed I was doing something “nice” for the health of the plant. I was so freaked out by the experience, I would carefully walk around the plant so I wouldn’t touch it! It never occurred to me that plants had feelings, or that they could even communicate. Repeat, this is the only weird experience I have had with a plant. I am not on meds. I suppose I’m a little neurotic 🙂 I am married, two grown sons, and am fairly well adjusted.

Very interesting,nature is a cure and trees are one of the sources of the vital energy we need daily.My vision is to see and have green slums,cities, countries and the world.I have a small group we plant tress in our area and educate people on their importance.

“Talk” is misleading and limiting. Go beyond language to Empathy.

I read way back when that native Americans would pray before consuming animal or plant, thanking it for its sacrifice.

This, once again, infers that we are separate from nature. We are not. It’s all one thing.

Brliiant read and I agree 100%

you did not source the cover image, which is the edited art of Clancy Cavnar. See more of this visionary’s work at http://www.clancycavnar.com/index.html