At a recent retreat I facilitated focused on social change, a diverse group of people gathered, from company and foundation executives to grassroots activists and public housing residents. Their goal? To confront their own biases, form relationships across differences, and start to rebuild trust in their community. In our politically polarized society, the authentic conversations they had about race, religious differences, and our country’s often painful history were rare, courageous, and transformative.

Efforts like these exist alongside mounting evidence[1] that in just about every facet of life — from education and health to housing and criminal justice — we are all acting in unconsciously biased ways. Recent studies have demonstrated that from prescribing pain medication[2] to people with broken bones to yielding for pedestrians[3] at a crosswalk, race plays a role in how we treat others.

According to Nobel-Prize-winning economist, Daniel Kahneman, we all engage in two kinds of thinking: ‘fast thinking’ and ‘slow thinking’. Slow thinking is the logical problem solving that occurs when we deliberately perform a task, such as writing an essay or solving a complex math problem. Fast thinking is a kind of unconscious response, such as when we slam on our car brakes before we’re consciously aware of a child running into the street. Many studies have shown that our tendency to unconsciously favor or trust certain people more than others can be observed in the brain[4]. This is likely a survival mechanism, deeply engrained because of our species’ need to make snap judgments about situations, for safety’s sake. Unfortunately, the same neural wiring that kept our ancestors alive is not optimal for navigating complex interpersonal situations like hiring qualified candidates, determining risk in high-conflict police interactions, or assigning fair punishment to misbehaving students. 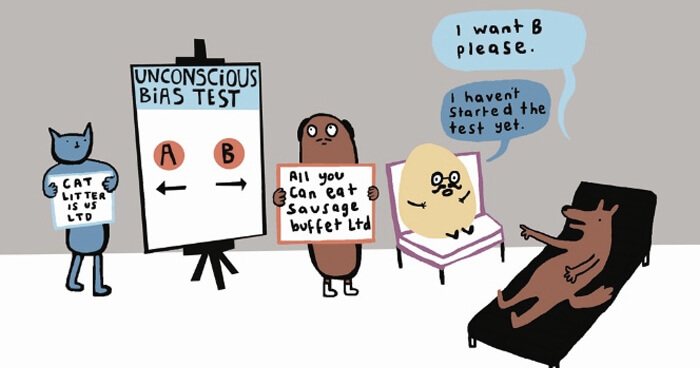 Fast thinking is deeply ingrained in us and is responsible for snap judgements.

This quick-thinking part of our neural wiring is responsible for keeping us alive, taking in cues from the world around us and responding to threats. Unfortunately, it’s also responsible for unconscious biases about people. The stew of false stereotypes that exist in our culture — men make better leaders, women are more emotional, certain races or ethnicities are smarter or harder-working than others — gets lodged in our brains and is then used to make snap judgments about the people we interact with.

But there is a solution to this problem: learning to overcome bias against people through deliberate effort.

In our recently published book, Overcoming Bias: Building Authentic Relationships Across Differences, we used the science of unconscious bias as the starting point for making practical recommendations to mitigate its impact on behavior. We’ve taken these lessons to hundreds of organizations, businesses, and communities that want to eliminate bias from the way they treat their colleagues, employees, and customers.

Here are some of the steps we have found can dissolve bias in us all.

Pay Attention to How Our Bias Shapes Our Environment

Eliminating the impact of bias in our lives requires us to acknowledge that it exists in the first place. Acknowledging that we have unconscious bias is not admitting a moral failing — this is part of the human condition. 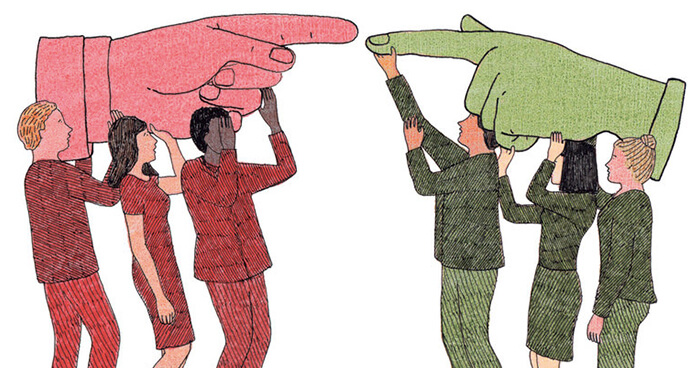 We all have bias but acknowledging it is the first step to overcoming it.

We can start a campaign of self-awareness, paying attention to the subtle ways in which bias may be impacting our behavior. We can ask ourselves: Are there people at work I always ask for advice, and others I ignore? Who is part of my friend group, and who might be missing?

We can also take an inventory of people we trust. Just off the top of our heads, we can name the top few people we would call if we received bad news or great news. How are those people similar to, or different, from us? Most of us trust others who are similar to us in significant ways.

Lastly, we can take an inventory of the media we are consuming — including news, books, music, TV shows, and movies. Are their perspectives basically similar to ours? Are the characters or authors telling stories that represent a different context from our own?

Once we acknowledge our bias and begin to pay attention to how it impacts us, we will be ready to do the work to overcome it.

Expose Ourselves to Counter-Stereotypical Images

One of the most powerful ways to combat unconscious bias is to diversify the stories we encounter so that we can connect with the humanity of people who may look and sound different to us. This means watching movies, reading books, or attending performances that target groups we are less familiar with. 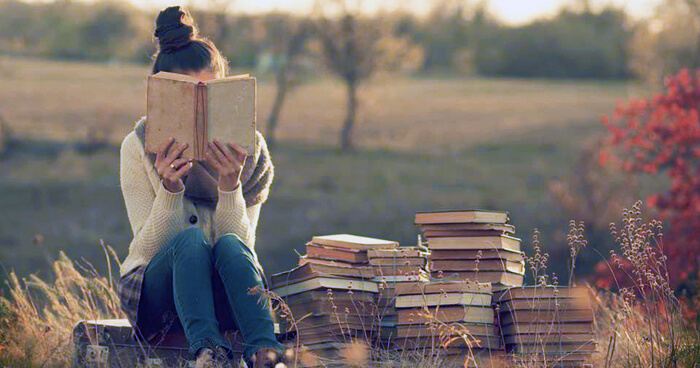 Exploring different kinds of stories that we wouldn’t normally help us to open our minds.

It can also mean purposefully seeking inspiration from moral exemplars of different ethnicities, races, genders, and abilities. Studies[5] have shown that being exposed to counter-stereotypical images and stories of people from other groups lead to less implicit bias.

My co-author, Tiffany Jana, shares a story in our book about how this worked for her. After a few negative experiences with Indian people in her workplace, she developed an unconscious bias against them, which she discovered later in her life was causing her to avoid all Indians. As she says:

It was not until I served on the board of directors for an innovative art gallery that my bias began to subside. I worked side-by-side with one of the most brilliant, engaging, and kind people I have ever known. My friend Prabir worked tirelessly to help the gallery become an East Coast destination and shape downtown Richmond, Virginia’s arts and culture scene. Five years of working toward the goal of bringing art to a great community alongside someone different from me changed my perspective and openness toward his entire demographic.

Reach Out across Difference

That means keeping our eyes open and looking for opportunities, rather than waiting for them to fall into our laps. For example, when we go to a work or social event, instead of scanning the crowd for people we already know; we can look for people we don’t know — who might seem different from us — and see if we can strike up a conversation. Simple contact can be a powerful way to combat bias. We can also seek ways to connect with people who are different from us in our everyday lives, whether at work or in our personal life. 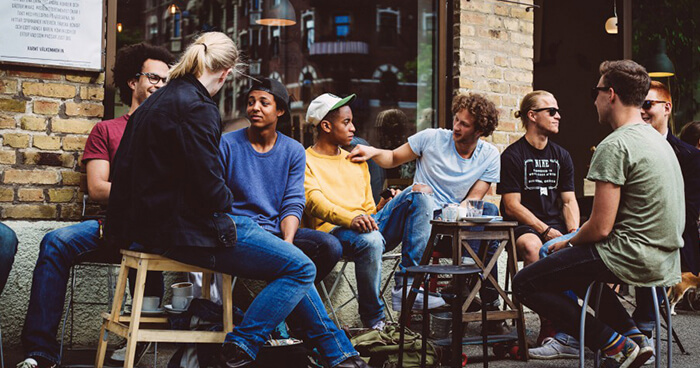 Putting ourselves in social situations we wouldn’t normally help us overcome bias.

I took this step in my own life by joining an African-American church. As the only white person there, I initially felt awkward, unaware of social norms, and unfamiliar with the style of worship. Over time, however, I formed deep and meaningful relationships that have lasted over a decade, long after I stopped attending that church. The proactive step of seeking to make myself a minority in an everyday part of my life paid off through helping me take off my cultural blinders and form relationships with people I would have never met otherwise.

Once we expand our comfort zones by building new relationships and consuming different media, it becomes easier to include more people in our own circles of trust. And research[6] has shown that cross-group friendships can make a big difference in reducing prejudice and bias.

But how to create that trust? By learning to ask rather than assume, and to listen rather than judge. In this way, we can stop the disconnection that may arise through misunderstanding.

In an excellent book on racial identity development, Why Are All The Black Kids Sitting Together in the Cafeteria? psychologist, Beverly Tatum, writes about how a typical racial disconnect happens between grade-school friends at a very young age. 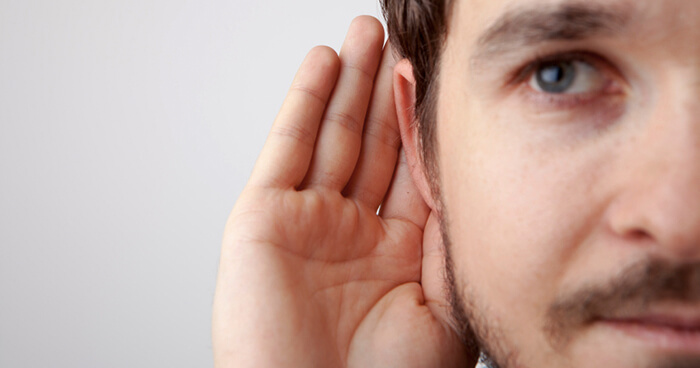 Imagine an African-American student has a negative interaction with a teacher, which she perceives as racially motivated. She shares this with her lifelong white friend, whose immediate response is, “That teacher is great; I’m sure she isn’t racist!” That is the moment, according to Tatum, when self-segregation begins and kids start to look for others who can understand and discuss their experiences.

The antidote to this disconnection is authentic listening and learning to ask meaningful questions. Our friend’s interpretation of her negative experience may not be correct — perhaps the teacher wasn’t being racist or sexist. But if our first reaction is to tell her she’s wrong before we even listen to her, we are driving a wedge between us both.

To authentically connect with people across differences, we must suspend our own judgments long enough to actually hear their experiences. We must ask open-ended questions and seek to understand rather than to challenge or convince.

As hard as it can feel to confront our unconscious biases, with motivation and effort, these simple practices can set us down that path. And building authentic relationships across differences is an essential part of our journeys.