Being Yourself When You Have Social Anxiety

BY Jill Suttie
Welcome to UPLIFT
Loving Yourself
Being Yourself When You Have Social Anxiety
Are You Afraid of Having Your Hidden Flaws Revealed?

When you don’t feel comfortable in social situations, it can be a lonely world.

Take my youngest son. Despite his intelligence, kindness, and great sense of humor, he’s shy about reaching out to others. In comparison to many of his peers, he seems to spend a lot of time alone and rarely joins group activities. Now that he’s about to go off to college, I worry that he may have trouble adjusting to a new community of strangers.

Having good social relationships is important to health and well-being, of course, but the best way to cultivate them isn’t by pretending to be someone you’re not. How do people like my son learn to overcome social anxiety while remaining true to themselves?

This is the question behind psychologist Ellen Hendriksen’s new book, How to Be Yourself. Hendriksen, who is socially anxious herself, argues that even the most worried among us can get relief and make connections with others, all without having to undergo a major personality change. Her book gives a thorough—and sometimes funny—guide to overcoming social anxiety, complete with illustrative stories and the research to back her up.

Contrary to popular belief, writes Hendriksen, what socially anxious people fear most is not judgment by others in and of itself, but that the judgment is right and correctly exposes their hidden flaws or frailties—a process she calls ‘The Reveal.’ 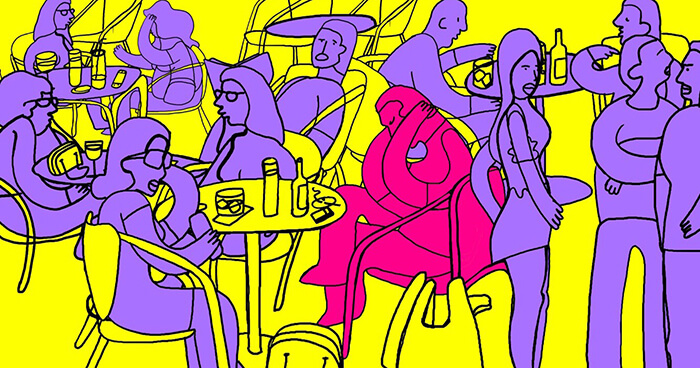 When you don’t feel comfortable in social situations, it can be a lonely world.

We think there is something wrong with us, and we avoid in order to conceal it. In our minds, if The Reveal comes to pass, we’ll be rejected, humiliated, or exposed.

These ‘Reveals,’ she writes, come in four flavors:

This feels true for my son, who seemed to shut down socially during puberty—perhaps because of physical changes in his body and new challenges in his peer relationships. No doubt the threat of The Reveal drove him to avoid situations where he might have his worst fears confirmed. But, of course, that also had the effect of preventing him from connecting with the people he most wanted to befriend.

Instead of relying on avoidance strategies, Hendriksen suggests there are better ways to cope with social anxiety. Here are some outlined in her book. 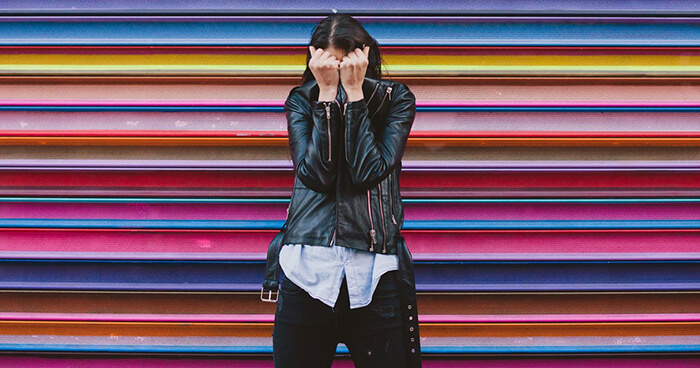 We think if our flaws are revealed we’ll be rejected, humiliated or exposed.

Often, it’s our irrational thoughts that make us anxious. But sometimes those thoughts are so ingrained in us that they’re practically unconscious.

To uncover your hidden self-criticisms, Hendriksen suggests filling in the blanks to this sentence: When I [fill in the situation where I feel anxious], it will become obvious that I am [what my inner critic says is wrong with me]. Naming the thought makes it easier to counteract it.

The tools of cognitive behavioral therapy (CBT) can then help you challenge and replace negative thoughts about yourself or your situation. Many CBT tools are provided in the book, but one particularly useful tip is to imagine the worst possible outcome in a social interaction and ask yourself these questions:

This gives you a reality check; no matter what you fear, it’s probably exaggerated. Putting a little distance between you and your catastrophic thinking gives you a chance to reason that, even if the worst came to pass—which is unlikely—you could cope. 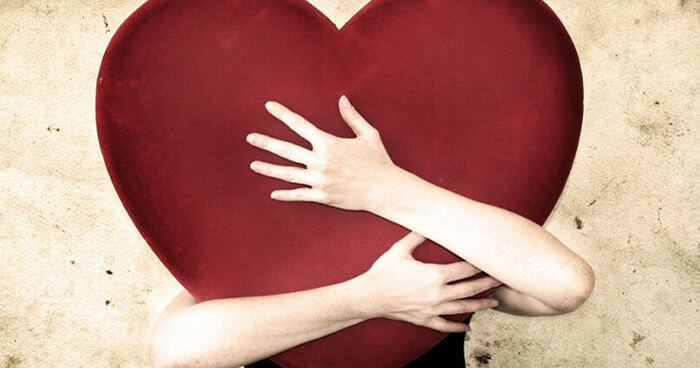 Self-compassion can help soothe your psyche and negative emotions.

Instead of beating yourself up with self-criticism, self-compassion can help soothe your psyche and address the negative emotions that come with social anxiety, according to Hendriksen.

Self-compassion consists of being mindful and accepting of your thoughts and feelings; sending yourself kind messages—such as Even though I’m scared, it’s going to be OK; and embracing your common humanity by remembering that everyone is scared sometimes.

Self-compassionate people tend to have lower levels of social anxiety—perhaps because self-compassion includes mindfulness, which soothes the stress associated with anxiety. And studies suggest that self-compassion, in general, buffers people from drops in self-esteem, which could come in handy during negative social encounters.

Being self-compassionate may help you remember that social interactions are a learning process, and that practicing rather than being perfect is the goal.

One of the difficult things about anxiety of any kind is that the more we avoid doing something that makes us anxious, the greater the fear and anxiety grow. Rather than waiting for the time to ‘feel right,’ we should start by taking baby steps and repeating them over and over until the fear goes away—a process called ‘in vivo desensitization,’ better known as ‘fake it ‘til you make it.’ 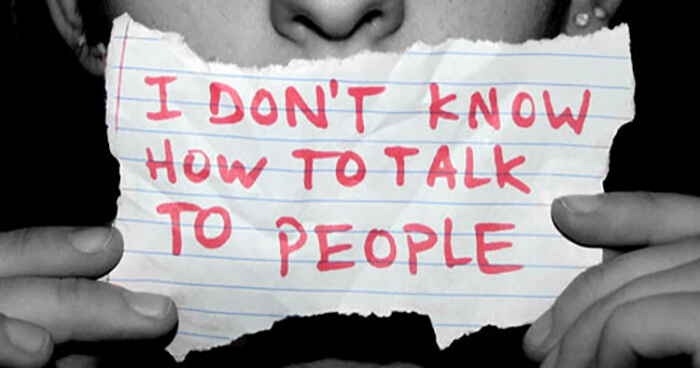 Often, it’s our irrational thoughts that make us anxious.

As recounted in the book, Albert Ellis, the psychologist who founded Rational Emotive Behavioral Therapy, was extremely socially anxious around women as a teen. He gave himself the challenge of going to a park bench every day and saying “hi” to any woman stranger he saw, eventually conversing with hundreds of women until his fear subsided.

This seems daunting to me, but Ellis helped himself by setting a goal and creating a structure—something any socially anxious person can do. For example, if you’re going to a party, you might commit to introducing yourself to three people or conversing with one person for one minute. Or you could volunteer for a formal role at an event, like gathering people for a photo or signing in guests. Research suggests that creating structure helps people to converse better with strangers and make a more favorable impression on others.

The key is to do rather than think about doing something scary. That’s how anxiety goes down.

Socially anxious people have ingenious ways of trying to avoid The Reveal in social situations. They may employ one or more ‘exit strategies,’ like avoiding eye contact, rehearsing what they’re going to say, taking deep breaths to calm their nerves, or smiling a lot to cover their discomfort. So one way to decrease anxiety is to identify your own exit strategy and experiment with letting it go.

Why do this? It allows you to be more yourself with someone, which helps them to feel more comfortable in your presence. 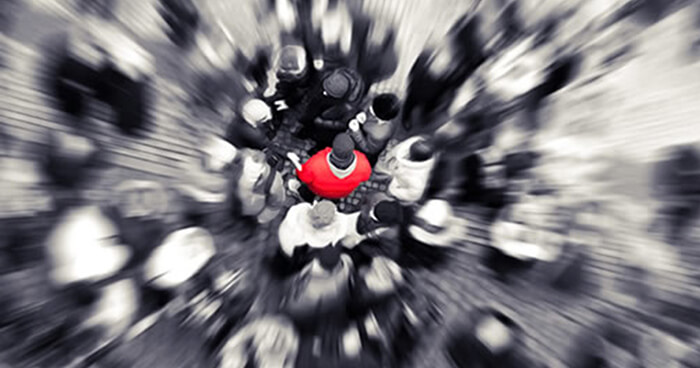 The more we avoid doing something that makes us anxious, the greater the anxiety.

In one experiment, researchers helped socially anxious people to identify their worst fears and their exit strategies and then assigned them to talk with a stranger (a confederate of the researchers) for five minutes. Those who received explicit instructions to let go of their safety strategies—rather than being told that their anxiety would extinguish itself with time—appeared much more comfortable and believed that their conversation partner liked them better. Interestingly, the confederates also rated them more likeable when they dropped the safety nets.

These findings suggest that being our authentic selves works better than trying to ‘cover’ or protect ourselves. However, that will be a lot easier if we engage in the other strategies first, until we gain more social ease and confidence.

You are Enough, Just as You Are

In the case of my son, I wish he’d had a book like this to read and follow when he first started showing signs of anxiety. But, interestingly, he’s picked up some strategies on his own. He’s taken on roles in student organizations that force him to engage with others and taken small steps at inviting others to hang out. Recently, at a senior send-off event, fellow students flooded him with appreciation for his quiet strength, humor, and kindness—an experience that warmed his heart and mine—because they saw his authentic self.

It also gave wings to one of Hendriksen’s key messages:

Underneath all that anxiety, you’re equipped with everything you need. There’s nothing you to need to fake, no image to manufacture. You are enough just as you are.

I honestly feel hopeless, like nothing I do is ever enough or good enough.
I fear everyone including myself, I fear rejection and abandonment, whether it’s because they move, we lose contact or something happens to them. It feels bad things happen to people that get close to me.
I’ve been this way for years, slowly being molded into a socially awkward introvert.
I dont know how to talk to others, and fear the worst if I do approach them.
I also feel like everyone is too good for me mentally and physically.
To be honest part of me has given up on trying to change, because it’s been years and I feel the same as I did when this all started, I’m just older.
How do I become the man I want, no, need to be?

I think with this I would be able to adjust and overcome this social anxiety which is actually causing me a lot of setback,sometimes to keep friendship it’s always a difficult things for me, standing on a podium for a speech it’s hell, I’ll be sweating like a Christmas chicken whenever I want to meet a new friend, what an embarrassment!!! have lost all my friends and to keep one it’s always a problem. Any more help from a psychologist. Thanks

It depends on the community of people I am surrounded with. It is easier for me to be surrounded with people who are warm and more relaxed then say people who are more anxious, fearful and distrusting. Many times I much rather be on my own then being surrounded with people who energetically are not balanced and happy. This is what constitutes my social anxiety, cuz deep down insede I know that I will be surrounded with judgment, drama and ego. That’s what gives me the social anxiety because there is no room to engage on a genuine level. But with people who are comfortable in being genuine, inspired and at peace, i am comfortable in my skin when socializing.. heck, that is why it is so much easier to be in the company of animals..they are the real THING. It is hard work to finds circles of human individuals and circumstances that provide me a sense of safety.. but it’s out there. I do check in a lot with how I feel..if it I don’t safe, I don’t socialize. I keep on sensing, feeling and on-wardly trying different settings, circles and circumstances. Sometimes, being in one’s own company is the most fulfilling.

Great, i think I can apply some of the above strategies personally… Actually, my kind of anxiety is the first and the second.. I would be happier if im helped more on these….

Can you help me

How do I overcome this can u help

How do I overcome it