All is Made of Love

In 1954, Aldous Huxley wrote The Doors of Perception. In it he describes how he experienced a great change in his perception of the external world: a vase of flowers became the ‘miracle, moment by moment, of naked existence.’ Reflecting on the experience afterwards, Huxley concludes that to enable us to live, the brain and nervous system eliminate unessential information from the totality of the ‘Mind at Large’. This understanding is mirrored in William Blake’s poem The Marriage of Heaven and Hell (from which the title of Huxley’s book originates):

If the doors of perception were cleansed,
everything would appear to man as it is: Infinite.
For man has closed himself up,
till he sees all things thro’ narrow chinks of his cavern.

Recently I discovered a wasp’s nest in my attic. The fact that thousands of wasps had chosen my loft space to build their home was at first a source of mild annoyance; one more thing to deal with on a busy weekend. However, as I looked closer at the stripy-squatters and their beautiful self-built home, my attitude started to change. This huge spherical structure made of regurgitated wood pulp was mind-blowing enough, but when I saw a fragment from inside, my grumpiness disappeared and was replaced by silent wonder. Here were perfect hexagonal chambers for the tiny yellow eggs, each one protected by a snug little down duvet. My first thought was: How does life know how to provide everything that’s needed so perfectly? I remembered from a recent documentary I’d seen about bees that the use of a hexagonal shape is no accident of nature; it offers the most efficient use of space in the hive. If you think about it, adjacent circular pods would leave gaps in the honeycomb. Clever huh? The hexagon is the strongest, most appropriate shape that insects could create for this function.

Perfect hexagonal chambers for the tiny yellow eggs, each one protected by a snug little down duvet.

There is such an incredible intelligence and order in the world which informs all creation and evolution. It is, of course, also the source of the question ‘How does life do that?’ and the sense of wonder arising in me. The wasp’s nest had prompted me to see beyond my personal perspective (the ‘narrow chinks’ of my ‘cavern’) and glimpse the infinite order and mystery of life that lies beyond it. 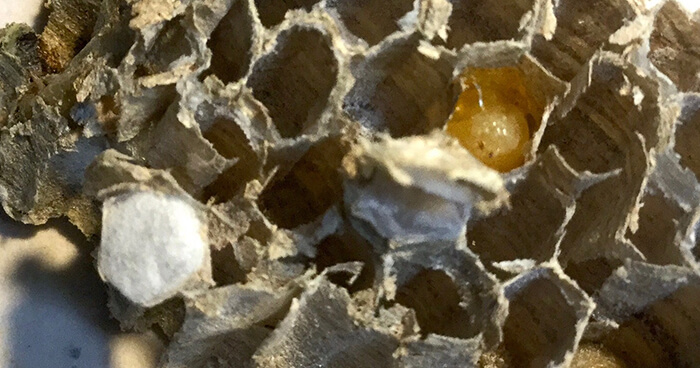 How does life know how to provide everything that’s needed so perfectly? Image: Jez Alborough

Such experiences are often called transcendent because they transcend the relative level of separation and allow at least a passing recognition of the interconnectedness – or Oneness – of all things. But what do we actually mean when we use the word ‘Oneness?’ To explore this, let’s consider what is the currency of that interconnectedness, in other words: What is it that we all share? Science provides the answer that everything is made of energy. The dictionary defines energy as: ‘matter in movement.’The desk I am writing on looks like a solid object, but science tells us that the atoms it’s made of are in fact vibrating. It’s all energy moving!

Energy is ‘matter in movement’.

The definition ‘matter in movement’ has another application: energy also moves from one form, one state to another. For example, ice becomes water, water becomes steam. To pick up on the example of my desk – energy in the form of a seed, grew into a tree. Some wood from it was cut down, shaped, sanded and treated to become energy in the form of this piece of furniture. To take this enquiry further, we also need to consider energy that hasn’t yet taken form; it exists as a potential to be something. There was a time when this desk didn’t exist, when the wood it’s made from hadn’t yet manifested as a tree, or even a seed from which it grew. Similarly, there was a time when you or I didn’t exist. Before energy manifested as us, it started out as undivided, potential energy. Because it’s undivided, a more metaphysical word for describing that potential is ‘Oneness.’ You can see it’s logical to say that this Oneness is where everything comes from; everything arises from the same source.

Each one of us is part of the soul of the universe. – Plotinus 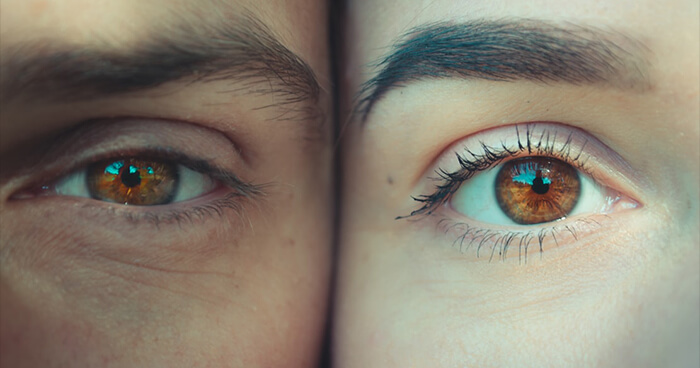 Oneness is where everything comes from; everything arises from the same source.

Although the spiritually inclined have always known about Oneness, it’s a fairly new concept in mainstream culture. It really broke into the mainstream group consciousness in the Sixties with the discovery of psychedelic drugs and also the West’s interest in Indian mystical religions. All sorts of oblique references to Oneness started showing up in popular music. Joni Mitchell’s song ‘Woodstock’ includes the line: ‘We are stardust’ – a succinct and poetic way to say that we’re all just parts of the universe, different forms built from the same building blocks of life – carbon, nitrogen, oxygen, and iron. John Lennon also pointed to this perception of Oneness in the song ‘I Am the Walrus’ with his lyrical wordplay:

I am he as you are he
As you are me
And we are all together.

The word ‘Oneness’ itself is quite poetic in a way. It’s not scientific; it’s one of those spiritual words that only start to make sense if you’ve had any experiences of life beyond personality. Religiously minded people might use the word God, but I prefer ‘Oneness’ because it’s free of any religious associations of dogma and belief. 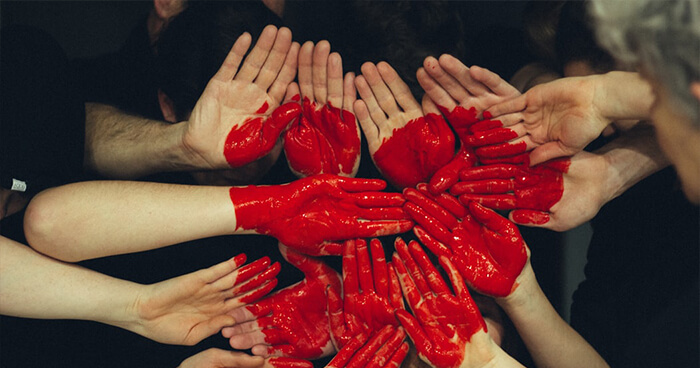 All is Made of Love

‘Love’ is another word that comes up when people try to describe psychedelic trips and experiences of Oneness. I’m somewhat apprehensive about using it in this article because it’s taken on all sorts of sentimental meanings; it’s been so devalued there’s a danger that using it will make what I’m saying sound trite. To be clear, what I mean by Love in this context (I’ll give it a capital ‘L’) is the creative, expanding, energy of life that manifests as us and the world in which we live. It is the connectedness of all things. When that is engaged with and perceived, the feeling of Love arises in the human heart. One could say that Love is what human beings feel when they perceive Oneness. The Indian teacher Nisargadatta Maharj put it like this:

All these descriptions of Love are, of course, simply human interpretations; how can they not be? It takes a human mind and heart to perceive this Oneness consciously, and describe it using language. But simply because this is a human experience and conclusion, doesn’t mean that it’s not true. It is true from the perspective of a human being. It is something that’s been perceived and expressed all throughout human history, in spiritual teachings, poetry and even more recently, popular music. In 1999 Bjork released a beautiful song called: ‘All is Full of Love’ which captures this transcendent feeling, You could also say: All is Made of Love. Love will never be isolated under a microscope in a laboratory – but it can be felt and known by the human heart.
This transcendent Love, which is at the heart of the experience of Oneness and interconnectedness, can also be experienced in relationships. If we’re really close to someone, we can feel this overwhelming Love; it’s so strong that it transcends the personal. The lovers disappear and only Love remains. That’s an experience of two lovers disappearing into Oneness.

Love is the bridge between you and everything. – Rumi

You might be thinking: ‘This all sounds very nice, but how can human beings be the embodiment of Love when there’s so much hatred and violence evident in human life? My answer to this is, when I use the phrase ‘All is Made of Love’ in relation to humans I’m talking about the absolute level, the essence of who we are. In the relative level, where duality gets to play itself out, Oneness takes on all sorts of disguises – one of which is the human personality. Hatred (and other emotions such as grief and fear) are psychological manifestations that can arise in the personality and obscure our perception of Oneness. This is why awareness of our personality and its emotional life is an essential step in finding our way back to our natural state, which lies beyond personality.

Limitless undying love which shines around me like a million suns
It calls me on and on, across the universe. – John Lennon 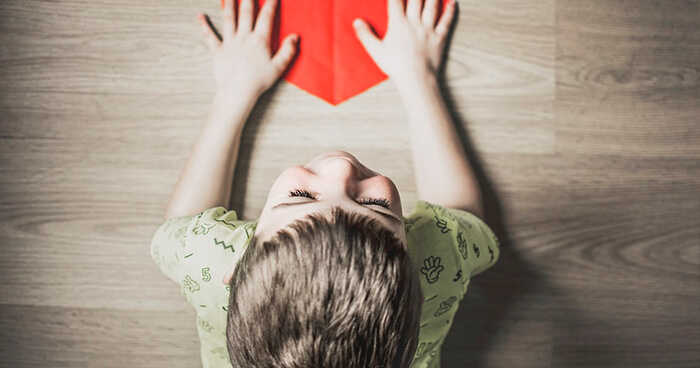 All is Made of Love.

The Recognition of Oneness is always Potentially Available

Oneness isn’t just an attractive concept that our minds can entertain intellectually; it’s the truth at the very core of who we are. The idea that ‘All is Made of Love’ may sound simplistic, unscientific or even naïve, but it can be known and lived consciously, and have far-reaching outcomes in the life of the knower. If Oneness is perceived, the separate sense of self – the personality and all its suffering – falls effortlessly into the background.
As my confrontation with the wasp’s nest shows; we don’t need dramatic life events to experience this. If there’s openness, the recognition of Oneness is always potentially available. As the poet Kabir said:

Wherever you are is the entry point.

We’d love to hear your comments about this article. Do you have a similar anecdote about feeling at one with the entire cosmos or perhaps it was a small moment of enlightenment? What is your direct experience when all the veils come down?

Love and Light to you all …

Hi Jez, in your article you state “if Oneness is perceived, the separate sense of self – the personality and all of its suffering – falls effertlessly into the background.
.
That’s sounds quite casual when in your own case heaven and hell was unleashed and you almost died in progress of the unveiling of love.
.
From what I’ve seen in 19 years on the spiritual path what you are talking about of being effertless is only the exception to rule.

“awareness of our personality and its emotional life is an essential step in finding our way back to our natural state, which lies beyond personality.” … so ‘ONENESS’ is what HUMANS share, because we are LOVE/LIGHT of the Divinity … ‘LOVE’ is the energy of all Creation ! Thanks.

This is a beautifully written article with so much clarity.
Thank you

Thank you Bodhivata,I appreciate your feedback

I wish to congratulate and thank Jez for such a beautiful, deep transmission of words. I have enjoyed how he is capable of bringing deep spiritual concepts into the human realm in a way understandable, I suspect, even by his guests, the bees.

Thank you, you led me to a place of serenity and hope. Yes we live in a difficult time, but change is necessary as much as death and life. What makes the difference is how we transition from one to the other.