Activism for the World we Know is Possible

Charles Eisenstein is considered to be one of the pioneers of the Occupy movement. He invites people into a new vision of the world and of activism through his books and lectures. He argues that we are in the midst of a transformation from a culture of separation to a culture of connectedness. In this interview, he speaks about what effective activism means to him.

If we believe the enemy has to be overcome by force, we lose.

An Interview by Elizabeth Debold with Charles Eisenstein

Elizabeth Debold: We are in the midst of interrelated crises—climate change, oligarchism, weakened nation states, multiple wars and violence. How can a concerned human being take effective action?

Charles Eisenstein: I have been thinking a lot about climate change. When we try to make climate change into an issue of a globally measurable variable like carbon dioxide or maybe greenhouse gas equivalents, the result is going to actually be worsening ecological crisis, even if we succeed in reducing those numbers. We know the story: the way that the law is enforced is influenced by money and political power. There is always a way around it. Right now Europe, especially Germany, has a very high percentage of its energy coming from renewable resources, which includes wind and solar and also biomass. 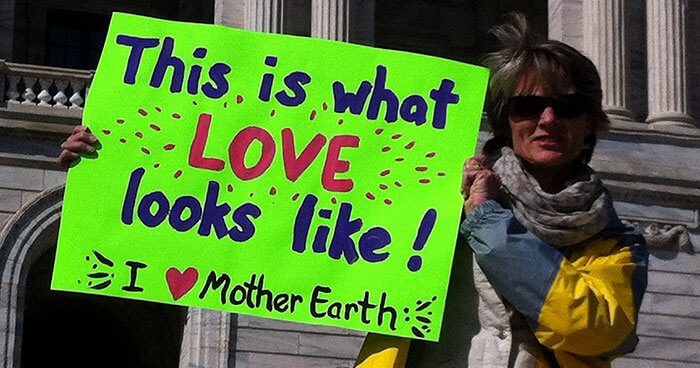 Activism for the world we know is possible

So what has happened is that the numbers look good, but underneath the numbers what is happening is that forests are being liquidated to make wood chips to burn at power plants. That counts as carbon neutral because the trees will grow back, right? The rate of deforestation in certain places has increased something like four times, because of sustainability. That is bound to happen when we don’t change our worldview, which is a shift in consciousness. A shift in consciousness is a shift in our perceptions and our stories.

Personally, I think that there are deeper causes for climate change; greenhouse gases are only part of the picture. Our understanding of nature is just so immature. If we are able to see nature as an intelligent, sovereign, and sacred being, then laws take the role of reminders or ritualized agreements, aligned with our worldview. If we don’t make that switch in worldview then no law is going to help, because there is always a way around the laws. But if you want to stop ecocide, and by ecocide I mean serious damage and destruction to ecosystems, however small, that is much more threatening to business as usual.

Any kind of economic development project is very likely to involve some kind of ecosystem. It means rewriting rules for everything that we do to extract what we call resources from the planet. Even the term natural resources is part of the problem, as it says, the planet is here for us, nature is here for us. The term environment is another part of the problem because it is separate from us. 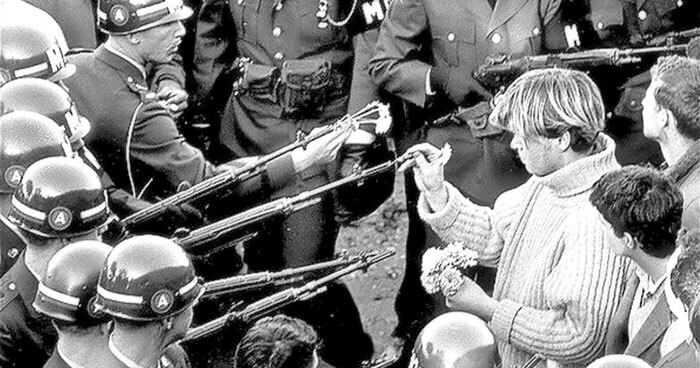 Responding to the threat of violence with love

ED: Does that change how we think about activism?

CE: Yes, if you accept that the foundation of our world-destroying machine is our perceptions, our consciousness, our sense of self, the story that we live in, then anything that disrupts that story or invites people to a new story is actually a political act. Normally, we only think of an activist as somebody who is engaged on a political level, which usually means trying to stop something.

For example, it seems quite clear, when you look at what is happening, that this or that horror has got to be stopped. So among these hardcore activists, if you are not trying to stop something, then you are a little suspect. If you’re a volunteer at a homeless shelter and you spend hours holding one old woman’s hand and that is the only love she received for twenty years, and she dies next year of cancer, is that a political act? I think it is. I think it is important to embrace, not as a substitute for other kinds of activism, but as something equally important. 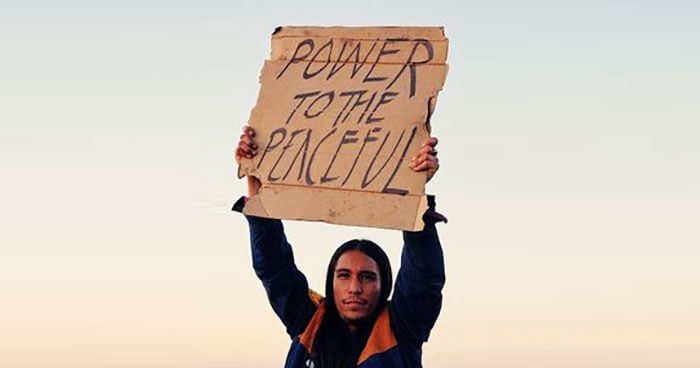 Power to the peaceful

They have the military industrial complex, the surveillance state, the media, and the financial industry. If they will only change by force, it is hopeless. That perception comes from a wound filled with pain and grief: it comes from the pain of betrayal, dashed hopes, dismay, and disappointment in human nature.

Is it the truth that we can only win by force? Is that the truth, or is that the projection of our unprocessed grief? Another foundation for effective activism would be to do grief-work. When people come through a deep experience of grief that is held in community, they come out of it a lot more joyful, positive, optimistic—and effective.

ED: Often we find ourselves very far from joy or positivity, because we have become cynical about the possibility for change. Cynicism seems to be the handmaiden of the old system, keeping it in place. 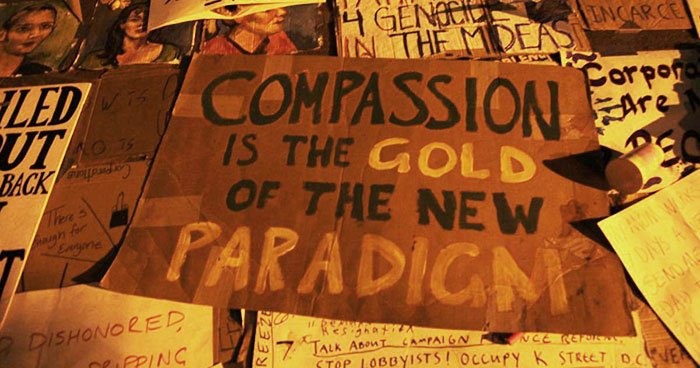 Putting compassion at the heart of activism

CE: The stirring of the heart or the knowledge that there is another possibility suggests to us that there is some way to get there. But we cannot plot out a chain of cause and effect that would bring us there. If we try, the cynic will come along and say that it is not going to work: The police are going to put you in jail, the finance minister will never agree to that, this will never work, that will never work….

At any stage, there is a good reason why it is not going to work. So, the cynical person doesn’t even try. But the innocent person says, ‘I am going to try anyway.’ Yet, it doesn’t feel like a fantasy or like purposeless martyrdom. It doesn’t feel like: I am just going out there to get arrested and go to jail and it is not going to work but I do it anyway because we have to try. There is this element of fun and creativity to it, an audacity. The naive person attempts what the practical person says can’t be done—and sometimes succeeds.

ED: The spirit or heart where the action is coming from is also the goal. It isn’t against something, it is for this deeper part of ourselves that is the deeper part of life. Taking action from that place brings out into the world the change that we want to happen anyway.

CE: Yes, it kind of creates a field of whatever the intention was, even if that particular action doesn’t succeed. I know this environmentalist in California who spent years trying to save a river from being dammed up. For many years, he and this core group of activists tried everything they could: legal challenges, direct action, protests, petitions, lobbying. And they failed. 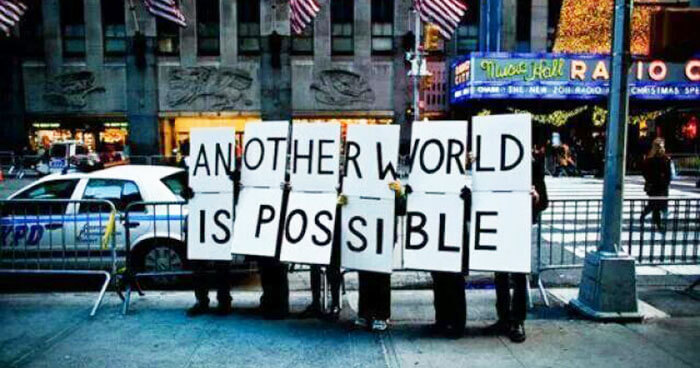 We must believe that another world is possible

It was the saddest day of his life. They dammed up the river and this beautiful ecosystem was submerged. It was such a painful defeat that he and the other activists could not even bear to meet each other again. But that was the last dam built in North America. It was as if their campaign was a prayer, and all of the setbacks were God asking, ‘Are you serious? Do you really, really want this to stop?’

Our conventional understanding of causality is part of the same mythology that is at the root of our system. It is essentially a force-based causality. Real causality is much, much bigger and much more subtle than that. We have no idea of the links that connect phenomena in our world; we haven’t the barest clue.

In the movie Aluna, the Kogi shamans in Colombia spend hours watching bubbles in a lake and from the weight of those bubbles, they know things about the entire region. They consider that there is a causal link between those bubbles and mangrove swamps five hundred miles away that are under threat. That is their worldview. 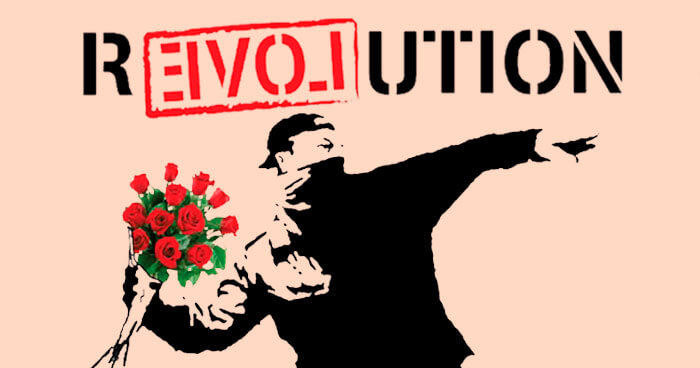 Love can be revolutionary

Part of the way that we maintain the dominant worldview is to categorize beliefs like that as superstition or magico-religious thinking. We impose an ontological imperialism on these people that perfectly mirrors economic imperialism. Economic imperialism says: Our ways are better than yours and development means that you take on our ways. Ontological imperialism says: Your reality-picture, ways of knowing, your beliefs, are backward. Isn’t it time to let go of that hubris? Whose society is more sustainable? Whose society is more beautiful?

Fifty years ago, we had a lot of confidence that we were creating a perfect world, but that confidence has been dashed on the rock of the ecological crisis and all the other crises. We no longer can say: We know that our way of living, knowing, and being is the best because what a glorious civilization we have created! Look how well it works! We can’t say that anymore.

ED: What inspires you and gives you hope at this point?

CE: Anytime the normal response of revenge, hatred, and punishment gives way to a response of human love. Four or five years ago a gunman went into an Amish school and killed a bunch of schoolgirls. When the media came and asked the parents what they wanted to see happen to the killer, they said that they forgave him and that there had been enough violence. Things like that bring hope.

Right now the things that really give me hope are happening mostly just under the surface. My optimism comes from understanding how big change happens in life through a process of crisis, break down, uncertainty, and then the emergence of something new. So that is why I can hold the inevitability and horror of the crises in my mind without despair, because this is just how change happens. 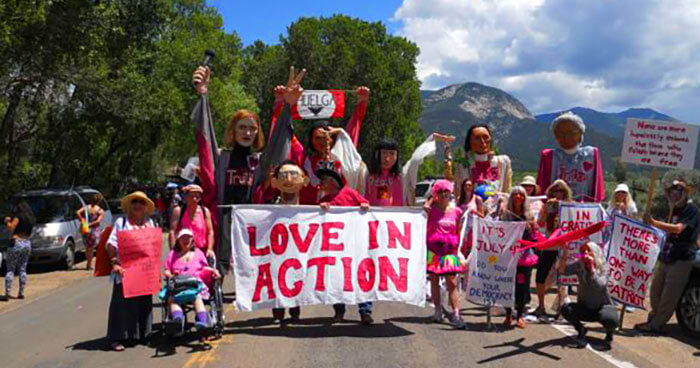 The power of love in action

That doesn’t mean that one should sit by complacently and watch it happen. The way that this dynamic works is that the crisis calls forth in us the activism and the capacities that will be needed to transform it. We are essentially in a birth process, and we are the babies. The mother is doing 99% of the work, but the babies do 1% of the work. It is much easier to give birth to a live baby than a stillborn one because the baby’s life responses are needed in birthing.

If we are not to be a stillborn, if we are an alive baby, if we are going to be born into the more beautiful world that our hearts know is possible, that will require our life responses. Which includes all of the action that we are taking in the face of war and the wrongness. It even includes the face of despair. That is part of it too because that is what comes right before surrender where we let go of what we thought we knew and are open to something different and larger.

ED: That moment of surrender is also what calls forward answers, or knowledge, information, solutions, creativity that actually did not exist in us. It didn’t exist in our way of understanding before. It’s an opening to something completely unknown, and then that unknown takes you to the next step that you couldn’t have seen.

CE: That is right. That is activism through which we discover the world that our hearts know is possible.

Originally appeared on One World in Dialogue. Register here to get audio from their 2-day global gathering.