“Have you ever eye-gazed before?”

I shook my head.

I wasn’t sure that I did, it sounded kind of dumb. But despite the self-consciousness that was fast arising, my intrigue overrode it.

Nick straightened himself in his chair and I followed suit. His eyes locked with mine with unnerving determination. And there they stayed. I squirmed in my seat as he held himself with ease. I averted my gaze, shocked at the discomfort I felt from such a simple task of maintaining eye contact. His crystal-blue trance encouraged me to keep going … I reconnected.

Moments passed. Thoughts erratic as jumping ants startled about in my head – “Is he ‘coming on to me? Why are we doing this? This is weird! Are people watching us? Is he reading me?”

Emotions began to boil up from somewhere deep inside and I grappled with an immense fear that was somehow merged, to my great surprise, with an overwhelming feeling of, Love…

“They say the eyes are the window to the soul.” He said, matter-of-factly. Gaze still gently fixed. Of course, it all made sense. My eyes moistened and my body softened at the truth of this familiar adage. He was seeing me. Willingly. The real me. The essence of me. No-one had ever initiated a connection like that with me before, and certainly not a male. Terrifying and yet, somehow heartbreakingly beautiful. A moment of melting: melting exteriors, melting labels, melting ideas. Until, nothing. Just two sets of eyes and the infinity that can only be witnessed beyond a sense of ‘nothingness’.

This forgotten memory, previously filed amongst the dusty folders of my teenage years, comfortably nestled beneath avoiding homework and breaking rules, revisits me as I watch an artist on the screen in front of me. She speaks about showcasing her most powerful work, made from the same simple fabric that I recognise from my own first taste of real connection – the fabric of truth and silence. 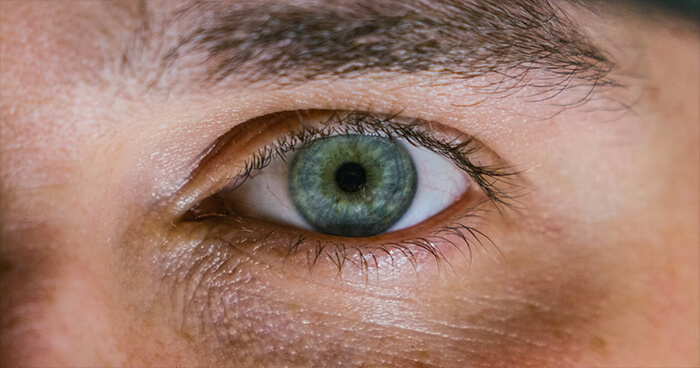 So much can be revealed, to ourselves and others, through our eyes. Image: Jordan Whitfield

The Artist Is Present

Marina Abramović is a world-renowned Serbian performance artist. In pure poetic perfection, she uses her body as her medium. She becomes her art. With this honed technique she has moved the hearts of millions, and none more than in 2010 when, as the artist in residence at New York’s MoMA (Museum of Modern Art), she showcased herself sitting in a room in her piece titled, The Artist is Present.

Within this large, mostly empty room, in one of the World’s most visited museums, Marina sat in front of a small table and an empty chair, an open invitation for any spectator, should they feel compelled, to sit opposite her and converse silently with her soul. She did this for eight hours a day for nearly three months, without the interruption of toilet or meal breaks. A physical preparation that demanded close to a year of her dedication and discipline. The curator told her to be ready to sit alone because New York City is a busy place and no-one would have time to simply sit and stare! But what actually happened, no-one, not even Marina herself, was prepared for …

Each day, people sat across from this regular human being as she ‘performed ‘ an irregular act. People waited hours. There were lines out the door. Some even slept in the streets to ensure they got an opportunity to sit with Marina. An opportunity to connect. To be seen. To be met. To meet themselves. To see themselves. Some came back multiple times. Marina met the hearts of 1,565 people in that time.

It was [a] complete surprise … this enormous need of humans to actually have contact.

And if the sheer number of people that sought out this connection was not surprising enough, the number of them who became emotional throughout the experience was truly moving. When asked about this in an interview following the exhibition, Marina said:

She spoke of the time during the performance when she decided to remove the table, and the profound effect this simple act had. Without the protection of an object separating her and each stranger, suddenly there was no barrier. Both were left completely exposed to each other, and this heightened sense of vulnerability that created an immediate transmission of energy between them, often had participants in tears within a few short minutes.

One man, Paco, returned twenty-one times. He was photographed with tears streaming down his eyes on many occasions. When asked about this, he reflects, “She almost acts as a catalyst. She presses the button that makes you feel all these emotions and feelings. I think through the concentration and the focus, plus the energy of the audience, it creates this movement within you. It’s very subtle the way it happens.”

Marina Abramović – The Artist Is Present

By the end of The Artist In Residence Marina admits her own life was changed. And reflecting upon my own brief experience of intentional eye contact, I can genuinely say – I get it. Something happens between two souls when they choose not only to look, but to truly see. No agenda. No conditions. Just two hearts pulling back the veils to reveal the great depths of themselves. Depths, sometimes, they don’t even know are there.

There’s so much incredible things when you look in someone else’s eyes, because in the gaze with that total stranger, that you never even say one word to – everything happens. – Marina Abramović

At the end of the performance, Marina speaks of the intensity of emotion she felt upon leaving the room and reuniting with some of the people who sat with her. She speaks of them as family; of knowing each of them. A fascinating connection miraculously fashioned without the backstory of memories or blood.

After watching this youtube clip numerous times, and thinking about the unspoken kinship I felt with Nick, who I’d barely known, my being was filled with awe and excitement at the simplicity of this spectacular display of humanness. I couldn’t help but be blown away by the fullness in the space between two souls, and warmed deep in my heart to know, even when we are strangers, we are never truly estranged.

Have you ever practiced ‘eye-gazing’ with a stranger? Why not give it a go? (With permission of course!) We would love to hear what happened – How did it make you feel? What did you learn about yourself or that person? Feel free to share your experiences in the comments below…

We see you. We love you.

Someone once told me it is sheerly impossible to gaze into another person’s eyes for a while and NOT fall in Love with them. I have come to believe that. If you have found that one person that you can simply stare with, lose yourself in the other one’s gaze back at you, you feel a Love & connection on a soul-level that cannot be put into words. You have to experience that. I dare you.
Sending so much Love to all of you xx
Marie

Hi Briony, Yes I have been ‘with’someone and it is truly a wonderful experience every thing that you have written here and what you and Maria Abramovic have experienced is true. The awkwardness is very real, questions in the head are exhausted and the sinking into the space between is truly realieving, realeasing and realising. ‘I had no idea’….to quote Jody Foster in ‘Contact’ : ) I was in a self development group some years back and this ‘practice of being with’ was done with no prior permission as you were paired with anyone in the group. But this added to the discipline. I can understand Maria’s practise. The soft emotion and pictures of past lives and feelings of deep experiences is truly remarkable. Life is not perfect but this does make it easier and special. Its like poetry : ) maybe this is the beginning of a new possibility, who’d have thought it was so near and dear. thank you so much Briony for the reminder.

How long do you hold eye contact for? Even a few seconds is intense for me.

I think we all have a very basic need to be truly seen! This is a beautiful expression of just how badly we crave it as human beings. For perfect strangers to waiting in line for hours just to fulfill the basic need of “see me!”
She must have been a nurse to be able to go that long without a break, brings back memories. It was always in the dead of night on any given shift but there would always be that one patient that I would round on and find them wide awake and terrified. By quietly sitting while facing them, making eye contact, the relief was palpable. Some needed to be touched by hand-holding but others just wanted you to really see them and acknowledge them and in some cases their fear.

Yes I have done this many years ago as part of a self development course. It was one of the most painful things I have ever done but so beautiful at the end to connect with a perfect stranger on a soul level.

The eyes are the light of the soul.

This is beautiful and I think I’m going to try this with some people who might need it, myself included.

Thank you for the inspiration.