A Man’s Perspective on the Rise of the Feminine

The theme of the ‘rising feminine’ is becoming more widely discernible around the world. And yet, many struggle to understand what this could mean, both for women, and the culture at large. Having dived deep over these last five years, I wish to share what I’ve learned from the perspective of a man.

The tantra traditions teach that both the masculine and feminine polarities exist in within all of us. We can consciously choose to explore, embody, and express the multitude of the spectrum, while also honoring the archetypal embodiment we have been granted.

In the same way, cultures are expressions of this polarity, and we can use this language as a map to diagnose the current global crises. Modern Western culture has been operating through an unbalanced masculine polarity that has resulted in some astonishing feats of science and technology, while at the same time inflicting astonishing levels of destruction. The ballast of the feminine is desperately needed to correct the current regime.

This journey into the feminine is not for the faint of heart. I began reading the existing literature on the dark feminine, starting with Marion Woodman’s Dancing In The Flames: The Dark Goddess in the Transformation of Consciousness. She writes: 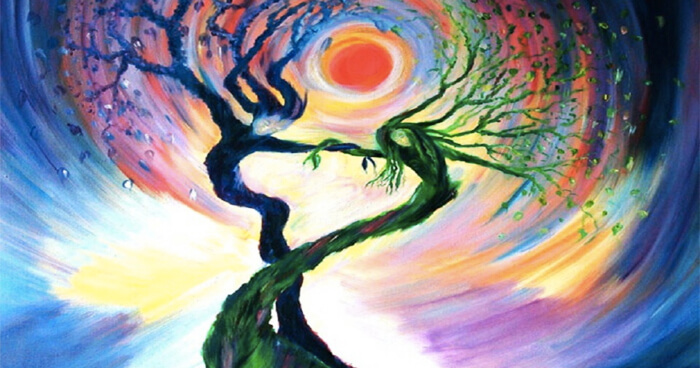 Masculine and feminine polarities exist within all of us.

When one seeks to approach the dark goddess, they must be prepared to lose much of their assumptions and certainties about themselves and the world.

Second, I realize that using the terminology ‘masculine and feminine’ immediately puts me at odds with any feminist position that aims to dissolve the idea of ‘essentialism.’

In brief: Essentialism is the belief that there are fundamental qualities that can be uniquely attributed to the polarities of the masculine and the feminine. In regards to gender, these qualities then constellate in those who identify and express as man or woman. I believe the vast majority of mainstream culture would agree with this.

The trouble starts when gender essentialism becomes a tool of oppression. Suddenly, a celebration of polarity turns into “all men must be like this” and “all women must be like that.” For example, men are not allowed to feel or express their emotions, and women are judged too fragile and inferior because they feel too many emotions. As well, the masculine/feminine language can invoke a binary that erases the spectrum of gender fluidity.

Given this, you might wonder why I still make the case for using the terms masculine and feminine. In part, because I have come to understand that ‘essentialism’ does not inherently mean there is an objective gender ideal that we must all aim for. Instead, we can see and experience these polarities from their variety of incarnations, through every man, woman, non-binary, gender fluid, trans, and two-spirited incarnations. 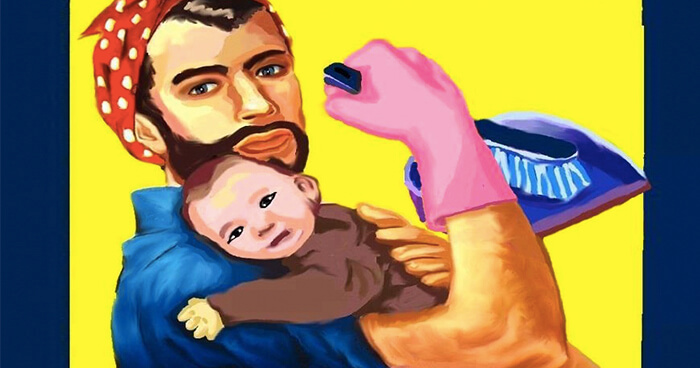 It’s important to embrace the qualities of both genders within each of us.

The Need for the Feminine in the Electronic Music World

In the summer of 2012, my life changed. On the drive home from an indigenous leadership gathering near Vancouver, Canada, I happened to listen to an electronic mix from DJ AppleCat, who delicately wove a sonic story through the cosmic and the carnal realms.

The archetype of the ‘dark goddess’ arose in my mind’s eye, known by many names, though in the Hindu tradition she is known as Kali. I recognized something different than what I’ve heard from many male DJs and Producers and I was intrigued by the mystery.

Around that same time, I was in the completion stages of co-producing Occupy Love (directed by Velcrow Ripper), which follows the first year of the Occupy movement. From its roots in the people’s uprisings of Tunisia, Egypt, and Spain, to its eventual disbandment, the documentary included a variety of voices, from women elders to young people, indigenous activists, and beyond. In its wake, I became enamored with the idea of my next film featuring only the voices of women.

These two things collided: a film about women and the rise of the feminine in electronic music.

Now, five years later, Amplify Her is poised to be released to the world. The project combines a feature documentary exploring the lives of female artists, along with a graphic novel, and motion comic series; written, illustrated, and animated by women. 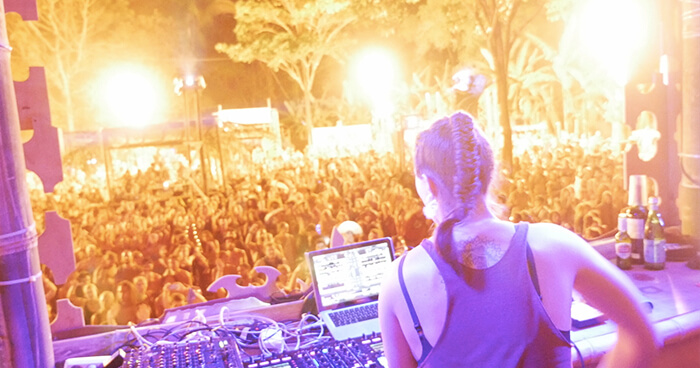 Women bring a different experience to music, in this male-dominated industry.

To better understand this shift, here are the qualities I’ve gathered through my exploration while making the film Amplify Her:

In one of my favourite Saturday Night Live skits, Andy Samberg plays DJ Davvincii, teasing a dance floor with an epic build up. When the bass finally drops, he levitates above the crowd like a god, where they succumb to his eyeball lazers while Lil John has the final word. The satire is overtly silly, yet hits the mark more accurately than the creators may have known.

Transcendence is the masculine quality that longs for freedom. It’s the impulse of up and out. Like the Buddha fasting under a tree, or the entrepreneur longing for Mars, or the Christian condemnation of the flesh in favour of spirit–all are examples of disassociation from matter and the body–all that which will eventually die.

Within the music scene, the masculine DJ dominates the crowd with his bass, not dissimilar to the dominance that can permeate much of male sexuality. Or as ill.Gates, a prominent male producer, remarked in our interview:

Immanence on the other hand, is the domain of the feminine. It is the orientation of down and in. Immanence for a feminine DJ is the willingness to be in relation with the crowd–sensing into the myriad of energies on the dance floor and responding with care and attentiveness that contains the whole field. 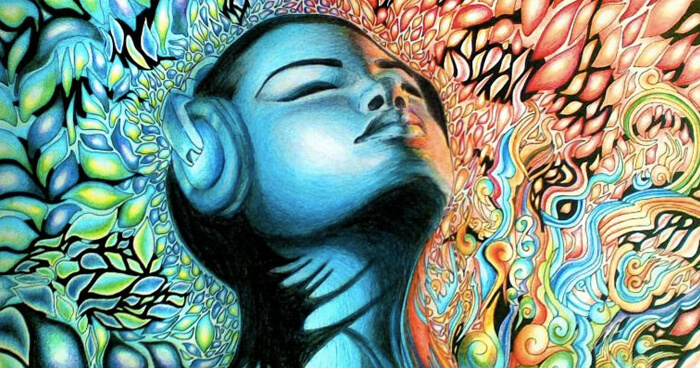 Immanence for a feminine DJ is about responding and adapting to the crowd.

I think male producers tend to get carried away with the engineering sound design and mixing side of things. Whereas I find music that is made by skilled female artists tends to be how elegantly can you make the listener feel things.

During the five years shooting Amplify Her, we interviewed numerous women. Many of them had been encouraged by promoters to “put themselves out there more.” To be bigger. Bolder. To claim their ‘brand’ and tout their sound. And yet, many felt uncomfortable with these demands.

In many cultures, there is little doubt women are taught to be ‘small.’ Not to overshadow their male co-workers or their partners. If they’re direct in their communication they’re called ‘a bitch.’ But a man is seen as ‘assertive.’ This conditioning ensures many women diminish their power, for fear of judgement and retaliation, especially when it comes to embodying and expressing their sexuality. (After all, the witch burnings were not that long ago, and the trauma for women is still within their cellular memory).

The other reason many women are less inclined to dominate the spotlight is because they seem to intuitively understand that no artist can succeed without the support of many others. There’s no such thing as being ‘self-made.’ WALA, a talented and outspoken female Producer, explains in our interview at Burning Man the journey it took for her to recognize and appreciate her own artistry:

Let’s say you have two amethysts that are uncut. They’re the same type of crystal, though if you shine light through them it’s going to come out differently for each crystal. I can take credit for the crystal form, because that I do work on. But ultimately when people hear something beautiful in my music, I think they’re hearing the light coming through. And that all of us have a shared experience of light if we open ourselves up to it, but you can still appreciate that each crystal is slightly different. 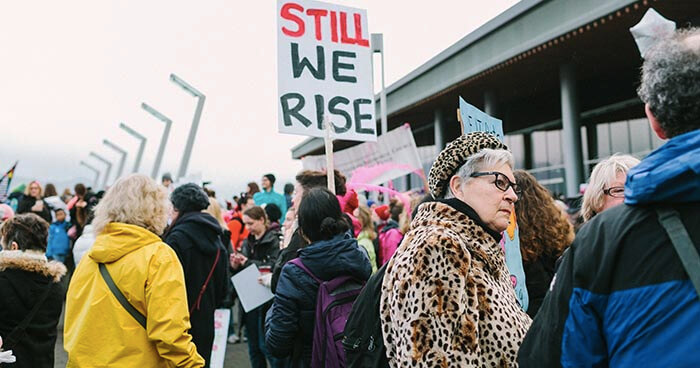 Feminine energy is about cooperating to rise each other up, rather than competing.

According to a recent survey by Thump magazine, women comprised only 17% of major festival lineups in 2016. We found similar numbers while shooting Amplify Her, and figuring out why led us to explore various theories.

One reason is that women are less likely to get booked for economic reasons. Festival promoters need to earn revenue, and if they don’t believe a female artist will bring in ticket sales, they’re more likely to book a known male act. Yet, if female artists don’t get more exposure, they aren’t likely to command higher sales. It’s a chicken and egg scenario, though with increased visibility, the statistics are changing.

Another reason is the lack of women in technological fields. Girls are less likely to be encouraged to follow their interest with technology and are often shuffled toward more ‘suitable’ endeavours. I believe this may account for some of the scarcity, though perhaps it goes even deeper.

The masculine excels at linear thinking. Perhaps honed by evolution for tracking an animal over hundreds of miles; the ability to focus on a single task was necessary for survival. This is remarkably similar to the focus needed to sit at a computer screen for endless hours crafting the complex sequences necessary for composing a music track. The tools are suited for a linear way of thinking and creating.

The feminine, on the other hand, excels at non-linear ways of perceiving and thinking. In tribal villages, the women would handle the food gathering while also keeping watch over the multitudes of children and elderly that would be left out of the hunting parties. In creativity, this means relying more upon intuition and feeling–capacities that are often frustrated by the existing tools that enforce linearity.

Amplify Her is due to be released soon!

Thankfully, this is changing with the advent of new tools like Imogen Heap’s music gloves that translate movement into sound, as well as Bjork’s Biophilia app that encourages kids to create through intuition and play. As the ability to create electronic music becomes more accessible to other modes of thinking and being, so will we begin to hear entirely new forms and compositions of music.

Dancing into the Future

Whether in corporate boardrooms, global flash mobs, or packed dance floors, the feminine is rising everywhere. And the next wave is about far more than ‘equality.’ After all, if equality is simply the ability for women to steer the levers of power that is ultimately careening our culture headlong toward eco-catastrophe, then this is no true revolution.

Instead, like Kali dancing upon the skulls of the old systems that need to die, the feminine is about rearranging the rules of the game entirely. This also does not mean subjugation of the masculine, but instead, to bring balance back to the cultural and personal polarities.

As Marion Woodman writes in Dancing in the Flames:

The Goddess is the life force within matter. She has laws that have now to be learned and obeyed. Her indwelling presence is the sacred energy, energy on which our egos have no legitimate claim. Confronted with this reality–a reality that is a confrontation with our own threatened survival–we realize that like Earth, nature, our bodies, we too are the vessels of an energy far greater than anything that tries to contain it. We realize that we, like the rest of nature, are participating members in the vast community of life, whose sacredness we must embrace if we are to survive.

May the rise of the feminine uplift us all.

Amplify Her is directed by Ian MacKenzie and Nicole Sorochan. You can find more information here.