A Collection of Wisdom from Alan Watts

Shortly after Alan Watts‘ death in 1973, his eldest daughters, Joan and Anne, began collecting boxes of his letters and correspondences. Though it took decades to publish, The Collected Letters of Alan Watts adds yet another piece to the vibrant extant literature of the great British philosopher and orator. Having recently met Joan at a conference and picking up this latest book, I decided it was time to thumb through the rest of my collection.

Watts’ bibliography is extensive, with as many volumes published posthumously as during life, most based off his exhaustive catalog of talks. He was an early interpreter of Eastern texts for Western audiences, not only in offering simple translations. Watts captured the essence of mythologies and scriptural narratives, retelling them in a language rapt audiences could easily digest (and sometimes not so easily; he wasn’t a mere popularizer).

As interesting and penetrating as his books are, he truly shone on stage (often, incredibly, after enjoying a bottle of whiskey). Since I discovered his work a quarter-century ago, I’ve constantly turned back to him when I need a bit of insight, especially the type that arrives with a touch of humor.

The below list are a few I picked out during a recent afternoon reminiscing on the man and his extraordinary life.

1. All our efforts at a spiritual life are prompted by self-interest. — Behold the Spirit (1947)

2. If we are citizens of this world, and if there can be no final satisfaction of the soul’s discontent, has not nature, in bringing forth man, made a serious mistake? — The Wisdom of Insecurity (1951)

3. The transience from which we seek liberation is the very liberator. — Nature, Man and Woman (1958) 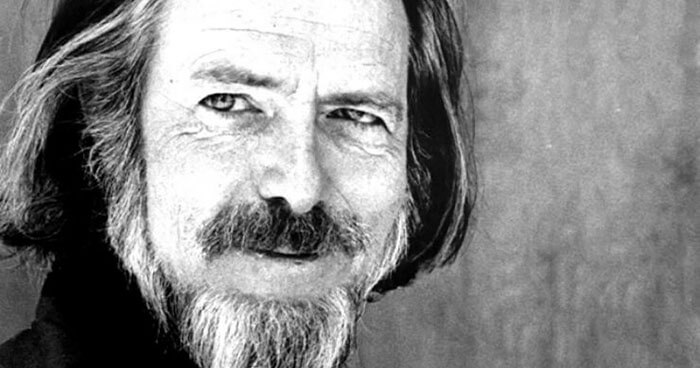 4. Psychotherapy and liberation are completed in the moment when shame and guilt collapse, when the organism is no longer compelled to defend itself for being an organism, and when the individual is ready to own his unconscious behavior. — Psychotherapy East & West (1961)

6. To idolize scriptures is like eating paper currency. — The Book: On the Taboo Against Knowing Who You Are (1966)

7. Human life—and all life—does not work harmoniously when we try to force it to be other than what it is, for the very simple reason that this is based on the assumption that I, who would control things, am something apart from what I would control. — Cloud-Hidden, Whereabouts Unknown (1968)

8. The world of myth is past, is ‘once upon a time,’ in a symbolic sense only—in the sense that it is behind us, not as time past is behind us, but as the brain which cannot be seen is behind the eyes which see, as behind memory is that which remembers and cannot be remembered. — Myth and Ritual in Christianity (1968)

9. The supposition that knowing requires a knower is based on a linguistic and not existential rule, as becomes obvious when we consider that raining needs no rainer and clouding no clouder. — Tao: The Watercourse Way (1975)

10. Very often it seems to me that faith and belief could be opposed. Belief comes from the Anglo-Saxon root lief, which means to ‘wish.’ Belief is the fervent hope that certain things are true. Whereas I rather feel that faith is an openness of attitude, a readiness to accept the truth, whatever it may turn out to be. It is a commitment of oneself to life, to the universe, to one’s own nature as it is, in the realization that we really have no alternative. — Zen and the Beat Way (1997)

take a look at the site here

take a look at the site here

[…] There you will find 35673 more Infos: uplift.love/a-collection-of-wisdom-from-alan-watts/trackback/ […]

One of the greatest thinkers of humankind. Period!
His philosophy is spot on , when it comes to human
Behavior in connection to the mind/body/ego as we try
To navigate our lives as Spiritual beings in a reality made
Of human constructs. MONEY, RACE, GENDER,SOCIAL STATUS
RELIGION etc.!!
Perfect example, I see some people seemed concerned that he died
due to his drinking (Alcoholism) , all that is Labeling….
It’s meaningless how he died. Alan Watts had to wisdom and compassion, Knowledge of how live free…simple.
Enough side.

I am smitten with the words of this fascinating man – I wonder about the disconnect between mind and body – ie such wisdom and alcoholism – he,too, was a searcher – with a mind that humbles me.

What “my” Allen Watts knew through his research and personal experience is…the paradigm shift from the natural ego(sensate ego) to the cultural ego (civilized ego) is the culprit of our discontent. That our disconnect from being a member of the animal, mineral, vegetable world of nature has doomed humanity to an existence that is forever wanting, never enough, and almost completely a mental construct.

Allen Watts is a flaming example of what it means to be the best human–being he could be and by embracing the unique mind that is in the human condition and using it to find the reality of who we are…nothing less than smart animals.

The most interesting item concerns TRUTH. What is the truth in any circumstance? Who decides the truth in whatever circumstance? Who believes the truth that is told?
In this day of internet lies and disinformation can we depend on any organisation to gives us a true reckoning of the current state of play within the world?
Should we even depend on the scriptures as interpreted by the various faiths?
Truth, now that is a real conundrum.

My lucky life and assertive intuitiveness [not bragging, just explaining] how I heard Alan Watts at UCLA & KPFK radio in LA CA in 60’s. Then by chance in 1972 I heard of workshop where I was given assignment to be driver from site to his hosts = 2 drive hrs away –for 3 days. Of course, we were friendly as in ordinary friendship formed for those few days spent in same spaces.

I can tell if someone is real, sincere mostly in person, even if seen, heard as in live lectures – vs. not much in books, recordings,or distanced presentations. He was natural, real, egalitarian,conversational, genuine – not snobbish, elitist nor seeking any favors, nor was I. A lucky meeting for both actually. Some personality similarities perhaps.
you
Even now, from a local Pacifica radio – KPFK.org – anyone anywhere now – can also stll hear on internet = via their computer : KPFK “Something’s Happening” pgm – & in their KPFK archives- listed for 60 days –
for what was played weekly on each Thurs. 12M-Fri to 1am – weekly for 1 hr. Alan Watts tapes replayed there. Also different tape on Sundays 8 am.

See KPFK.org website for how to listen when played or later on Archives – can do self-record when 1st played only but only listen on Archives later.

Also some few lectures have been transcribed to text by me on my blog :
KPFKcommentators.blogspot.com

Alan WAtts is still now, a Reminder of what we may already know, have heard before, or need to be prodded out of whatever other western socialized -propaganda & belief systems insist is THE Only 1 Truth – theirs. Not.
So his words & sharings continue to be of value.

A mental flick to ‘wake up’ again…and again…. from the hypnotic media-glare and fear-mongering we exist within…not just now, before too.

Also libraries have some of his books,maybe recordings too ? & as bookstores do -good to buy and then pass on to others we want to en-light-en also a bit maybe?

Butsound recordings are more relevant because tone, voice, emphases and the more human-experienced-sound is more effective than are printed words anywhere, including net.

Alan Watts, is probably my favorite teacher on the Eastern philosophies, his humor and insights are fun to listen to but so profound! I was looking at his life, his biography and it seems he died of the effects of alcoholism. Not much was written about it that I could find. If anyone has any information about that I would love to hear it. Just of interest to me, is that he had 3 marriages (I think is what it said) something of an alcohol problem and died at 58. His picture speak to me of someone who struggled with some level of depression, there is a heaviness in his face and demeanor. I don’t think this takes anything away from this great teacher! Just something to ponder that these incredible truths, that can bring so much peace/ calm/ transcendence in life almost seem to have evaded him in some way. Of course in the eterneties of time he will be no less or more for that or for anything he did..just a message for us in our time (in my mind) that these truths don’t necessarily by themselves bring peace or calm. That there may need to be something else…possibly, not necessarily. That we always need to keep working at different things until we find the right mix of ingredients that works for us…like a tasty stew that we might make…experimenting until we find the right mix. That could include medications, therapy, psychedlics, christian teachings, network of support people in your life etc. Being an intellectual and teaching these truths could in some way actually create a disconnection from the truths themselves…intellectuallizing the ideas at some level..versus integration. Not saying that is what he did, but just maybe. A lesson for the ages perhaps, or perhaps not.

I first heard Alan Watts on Pacifica radio station in Los Angeles in 1985.
His talks laid the foundation of my understanding of life in the widest sense.
With extraordinary clarity and humor he put into words a vision of reality that I could identify myself with. He articulated what I intuitively felt as true.

I often wonder why his work is not mentioned or quoted when discussing how to overcome the shortsighted understanding of nature, human existence, of Life.
In this times of rapid change that calls upon us to widen our perception of all there is
the writings and talks of Alan Watts could be of great help to individuals and society.

Thank you again for your effort to collect some of his thoughts and present them on Uplift.

“based off” is grammatically incorrect. Use “Based on”. Don’t make Alan Watts look bad, come on.